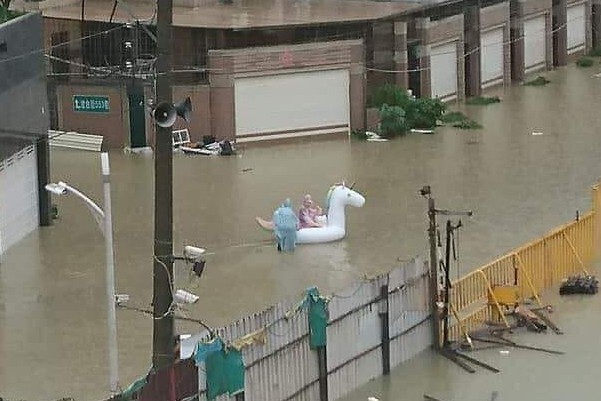 TAIPEI (Taiwan News) -- As a "rain bomb" blasts the southern Taiwanese metropolis of Kaohsiung today, a netizen posted a photo this morning of a neighborhood street which has become a river as a child floats along it on a giant inflatable unicorn.

As a tropical depression and moist southwesterly winds lash southern Taiwan, what is being described as a "rain bomb" is blasting Kaohsiung with up to 216 millimeters of rain having already fallen in the early morning, forcing the city to cancel work and classes. Meanwhile, a heavy to torrential rain advisory is in effect for 10 counties and cities acrossTaiwan.

This morning at 10 a.m., a member of the Facebook group Breaking News Commune (爆料公社) posted this photo of what appears to be a child in a pink poncho playing on a white, inflatable unicorn in a flooded neighborhood on Chenghe Street in Kaohsiung's Renwu District, while being accompanied by a parent in a blue poncho. The caption simply reads, "Everyone, your eyes are not deceiving you." Soon, netizens on Breaking News Commune posted more photos of what turned out to be two kids riding on the back of the trusty steed.