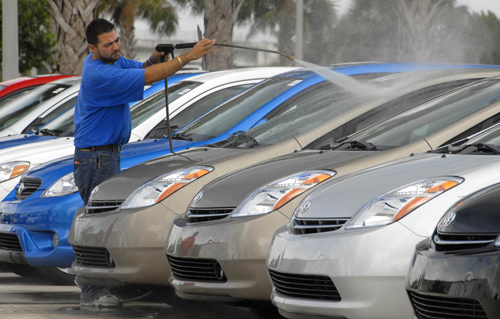 Predictions by Toyota Motor Corp. executives the Japanese auto giant will sail past General Motors Corp. to become the world's top automaker hardly surprised analysts and other industry watchers.
Tom Libby, an analyst with J.D. Power and Associates, said industrywide trends have favored Toyota and other Japanese automakers such as Honda and Nissan for some time.
"I don't think it was any surprise to anyone. I think it just a matter of time before Toyota passes GM," said Libby at the company's office in Troy, Michigan.
Alan Baum, an analyst with The Planning Edge in Southfield, Michigan, said Toyota had clearly benefited from the perception among American consumers the company's vehicles are better-built than those offered by the U.S. Big Three: GM, Ford Motor Co. and Chrysler.
"Quality is a big factor," Baum said since Toyota buyers tend to be among the most practical-minded in the industry.
Toyota also has been helped by macro-economic trends, Baum said.
American buyers are moving out of market segments such as pick-up trucks, standard-sized sport utility vehicles (SUVs) and full-size cars where domestic companies are strongest and into segments such as small and compact cars and small SUVs where Japanese companies led by Toyota have an edge, Baum said.
"These macro trends are all part of the reason for the shift," he said.
In a year-end news conference Friday, Toyota president Katsuaki Watanabe laid out a production target that would see the company overtake General Motors in 2007.
Toyota's 2007 production target is 9.42 million units, which should surpass the 9.2 million analysts expect the financially struggling GM to build next year, when it is expected to continue to trim production.
A surge in oil prices over the past couple of years has made Toyota's cars more appealing to many buyers, Watanabe said.
However, David Cole of the Center for Auto Research (CAR) in Ann Arbor, Michigan, said it could take as long a decade to determine whether Toyota would replace GM as the world's top automaker.
GM's rapid growth in emerging markets such as Russia and China will keep the race with Toyota relatively tight, The Planning Edge's Baum suggested.
"Toyota was a little slow getting into China, but GM is very strong in China," Baum said.
Richard Wagoner, GM's chairman and chief executive, also has said he expects GM to continue to post strong growth in overseas markets where it now sells more cars than in the United States.
A report released Friday by the automobile manufacturers association in China, where GM is vying with Volkswagen for market share leadership, indicated that sales of new vehicles increased by 15 percent in 2006, topping 8.0 million units for the first time. The sales figures also make China the world's second-busiest carmarket after the US.
Tom Pyden, a spokesman for GM, which has been the world's top automaker for more than 70 years, said the company was not looking at production numbers from one year.
"We don't focus on one year," Pyden said. "We're focusing on cost cutting, on profits and designing great cars and trucks."
CAR's Cole said the GM-Toyota contest could lead to a re-alignment across the entire industry.
"When the top two guys fight it out, it has consequences for everybody else," he said.
GM already has reduced the cost of building a new car by more than US$2,000 per vehicle during 2006 thanks to changes to its contract with the United Auto Workers union and efforts to trim material costs.
GM also has reduced its consumer incentives and cut back on sales to rental fleets, Cole said.
Baum said Toyota has a big edge in investments in new vehicles, plants and equipment. "Wall Street (puts) GM under a microscope. But they love Toyota and Toyota can spend whatever they want," Baum said.
John Dingell, an influential Michigan Democratic congressman whose district encompasses industrial suburbs south of Detroit, said Toyota also has taken advantage of the Japanese government's helpful policies.
"Toyota pays only about one-tenth of what GM pays in healthcare and pension costs and has only accumulated a few hundred American retirees compared to more than 400,000 for GM.
"In addition, Toyota itself has said that as much as one-third of its profits are due to the value of the Japanese currency," Dingell said in a statement issued by his office.
"If Toyota's worldwide production surpasses General Motors, it will simply provide further evidence of the need for the U.S. government to pursue policies that maintain and strengthen the U.S. industrial base," he said.
Toyota "enjoys the active backing of a government that provides health insurance for its workers and retirees and manipulates the yen for strategic advantage," the lawmaker said.