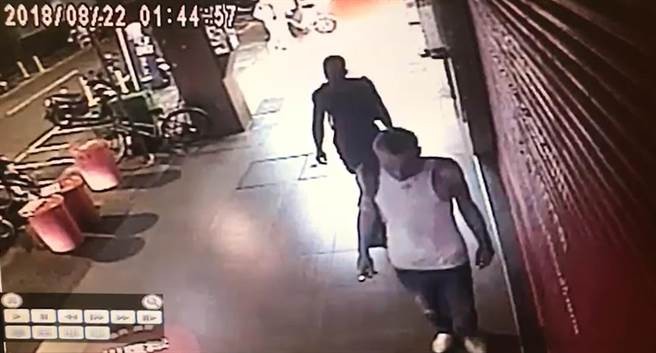 In the surveillance video released to the public, 37-year-old Israeli-American tattoo artist named Oren Shlomo Mayer, who goes by the handle "Oz" (Chinese name 孫武生) and 30-year-old African-American male Ewart Odane Bent can be seen casually walking on a sidewalk at 1:44 a.m. Police said that Mayer and Bent dismembered Ryan at 1 a.m. on Aug. 22, after which the two "happily" went to the supermarket nearby to buy beers to take back to Mayer's residence to celebrate, according an Apple Daily report.

Given that it must have taken considerable time and effort to murder 43-year-old Canadian English teacher Ramgahan Sanjay Ryan (Chinese name 顏柏萊) with machetes and dismember his body with wire saws, what the Liberty Timesdescribed as the "relaxed" demeanor of the of the two suspects just minutes after the gruesome deed was completed is all the more chilling.

Based on analysis of surveillance camera footage, police have determined that the two suspects left Mayer's rental apartment on Emei street in Taipei's Wanhua District on the evening of Aug. 21, when the murder was believed to have occurred. The men first picked up rented bicycles from nearby YouBike station and rode them to Zhongzheng Riverside Park where they allegedly laid an ambush for Ryan and brutally hacked him to death with machetes.

After the men allegedly murdered Ryan, dismembered his body, placed the remains in white trash bags and dumped them into the Xindian River (新店溪), they hopped back on their YouBikes and arrived back at the rental station at 1:30 a.m., a mere 30 minutes after the murder allegedly took place. They then casually sauntered their way back to Mayer's Emei Street residence, before Mayer later emerges to purchase two beers from a nearby convenience store to celebrate their gruesome act.

Mayer can be seen wearing a spotless, white wife-beater shirt and both men are carrying backpacks, leading police to suspect that they were carrying their blood-soaked clothes inside the bags.

Bent was arrested by police on Aug. 24 and that same evening a 21-year-old Taiwanese-Canadian man identified as Wu Hsuan (吳宣), who goes by the English name Dan Wu and is a promoter for the Taipei nightclub Triangle, was also arrested for allegedly assisting Bent and Mayer purchase two machetes. Wu was released yesterday (Aug. 27) on NT$300,000 (US$9,778) bail.

Meanwhile, Mayer was spotted leaving the country on a flight to the Philippine capital of Manila on Aug. 23. He remains at large and a manhunt is underway in the Philippines to try and track him down.