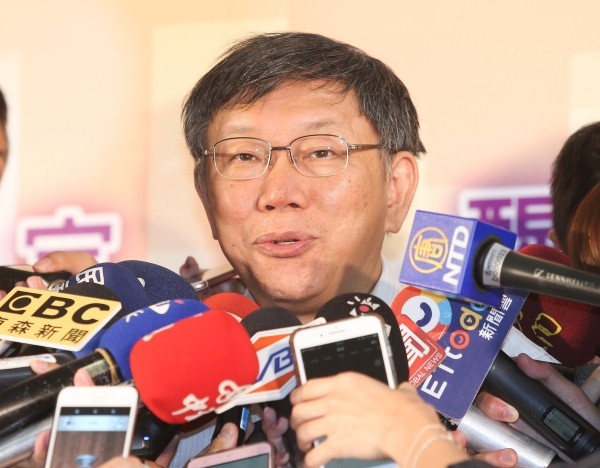 TAIPEI (Taiwan News) -- Taipei Mayor Ko Wen-je (柯文哲) yesterday (Aug. 27) refused to sign a petition calling for the changing of the name of Taiwan's national team at the 2020 Tokyo Olympics from "Chinese Taipei" to "Taiwan."

While riding the public bus on his way to work yesterday morning, a young man requested that Ko sign a petition calling for the name of Taiwan's national team at the 2020 Tokyo Olympics to be changed from "Chinese Taipei" to "Taiwan," however the mayor ignored the request, reported Liberty Times. The mayor's entourage then pushed the man away, causing him to shout "Mayor do you want to sign it?" "Mayor don't you want to take a stand?" and "Mayor, didn't you say you were dark green?"

Ko did not respond to the questions and exited the bus without any comments.

When pressed by the media at Taipei City Hospital later that day to comment on why he rejected the offer, had said "Tolerance is the foundation of freedom, but freedom does not infringe upon the freedom of others." Ko said that he respected the petition to change the name, however he bluntly said "I don't like the kind of violent coercion and clamor that requires people to express political opinions, I find it very disgusting."

Ko said that he respects the need for civil society to express political opinions, but he stressed his belief that local government officials should stick with the central government's stance on foreign affairs.

In response, the man who requested Ko's signature said "Unfortunately, we learned from this action that the mayor of our capital refused to speak on the issues of national sovereignty and Taiwan's dignity."

On its Facebook page Taiwan Taiwan (@TeamTaiwan.2020TokyoOlympics) announced at 9 a.m. this morning that the petition had exceeded 360,000 signatures.