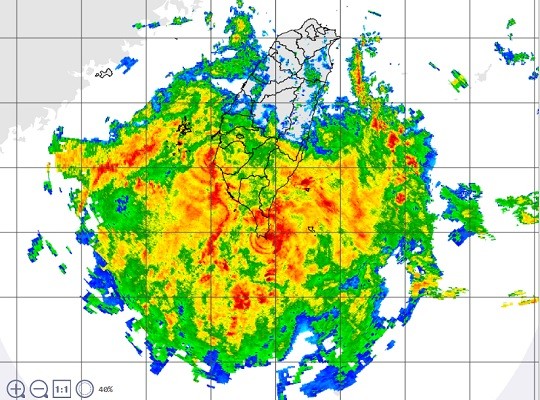 TAIPEI (Taiwan News) -- As a tropical depression and moist southwesterly winds lash southern Taiwan, what is being described as a "rain bomb" is blasting Kaohsiung with up to 216 millimeters of rain having already fallen in the early morning, forcing the city to cancel work and classes, while a heavy to torrential rain advisory is in effect for 10 counties and cities in Taiwan.

The Central Weather Bureau (CWB) has issued a special report on the heavy rain in Kaohsiung with cumulative rainfall in the city's Fengshan District having reached 216 millimeters within only six hours this morning. The Water Resources Agency has issued a level 1 flood warning for 12 districts in Kaohsiung.

Despite the massive deluge, no cancelations had been announced in the early morning hours, leading frustrated Kaohsiung netizens to criticize acting Kaohsiung Mayor Hsu Li-ming (許立明) on his Facebook with comments such as "It's been raining cats and dogs all night long, how are we supposed to go out?” They also reposted a text message sent out by the weather bureau stating "Thunderstorm instant message."

At 6:12 a.m., the Kaohsiung city government finally announced that work and school had been canceled for the day, leaving many commuters who had already tried to traverse the inundated roads livid, with netizens leaving comments such as "If you want to cancel work and school, you need to announce this sooner, people are already out the door!" Heavy to torrential rain advisories issued by CWB for 10 counties and cities in Taiwan.

CWB forecaster Liu Pei-teng (劉沛滕) said that due to the effects of moist southwesterly winds, the heavier rains started moving south late last night, with Kaohsiung and Pingtung being pounded by heavy rains from midnight until 5 a.m. this morning. The resulting cumulative rainfall in these areas reached up to 200 mm, said Liu.

Liu said that heavy rains should continue today in Kaohsiung and Pingtung, while people in central and southern Taiwan should also be vigilant for heavy or torrential rain.