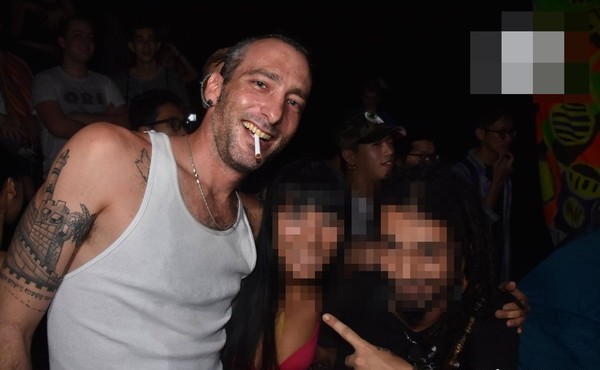 TAIPEI (Taiwan News) -- The second man suspected of brutally murdering and dismembering a Canadian English teacher in New Taipei City last week is believed to have fled to the Philippines and Taiwan authorities are currently coordinating with local officials to bring the man to justice.

The second suspect in the gruesome murder of a Canadian English teacher-turned drug dealer has been identified by police as a 37-year-old Israeli-American tattoo artist named Oren Shlomo Mayer, who goes by the handle "Oz Diamond" and the Chinese name of 孫武生. After allegedly joining African-American male Ewart Odane Bent in ambushing, murdering and dismembering 43-year-old Canadian English teacher Ramgahan Sanjay Ryan (Chinese name 顏柏萊) with machetes on Aug. 21, Mayer is believed to have fled the country on Aug. 23 for the Philippines, reports TVBS.

Police said that Mayer and Bent dismembered Ryan at about 1 a.m. on Aug. 22, after which the two "happily" went to the supermarket nearby to buy beers to take back to Mayer's residence to celebrate, according an Apple Daily report. However, as news started to break about the murder, Mayer began worrying about being caught and feared that Bent' s phone logs would reveal their roles in the heinous crime.

Bent said that Mayer had asked him to flee with him that same day, but he refused, believing that their identities as the killers would not be unearthed by the police that quickly.

Police said that based on surveillance footage, they have determined that Mayer arrived at the Taiwan Taoyuan International Airport at around midnight on Aug. 23 disguised as a backpacker wearing a red short-sleeve shirt and shorts and carrying a backpack, with no luggage checked. In the airport surveillance camera footage, Mayer can be seen joking with a foreign woman who was waiting in line, but she is not believed to be involved with the case. Mayer then boarded Cebu Airlines Flight 5J-311 to Manila at about 2 a.m. on Aug. 25, according to the TVBS report, though Apple Daily reported that he left on Aug. 22 and SETN lists his date of departure as Aug. 23.

Taiwan and the Philippines have an extradition agreement and most recently, on May 23, Taiwanese police arrested a Filipino fugitive in May and sent him to the Philippines on July 27. According to an Apple Daily report, Mayer was the "largest supplier of marijuana in northern Taiwan" and as the illicit business continued to expand, Mayer invited Bent to come to Taiwan to help him sell drugs. Bent then came to Taiwan and began teaching English to pre-school children at Annie's English in New Taipei City's Linkou District, which though illegal for foreigners, does not require a criminal background check as cram school classes for older children.

The two men frequented the popular Taipei nightclub Triangle, where they met Taiwanese-Canadian club promoter Dan Wu (Wu Hsuan, 吳宣), who over the past year has allegedly colluded with Mayer, Ryan and Bent on selling drugs to club goers. According to Mayer's LinkedIn account, he started teaching English to children "aged 2-12" in Taipei at Alpha Beta School in 2016 and received an M.B.A. from National Chengchi University in 2018. According to his LinkedIn account, in 2017 he started his tattoo parlor DC Tattoos, which is located on No. 6 Guanqian Road in Taipei's Zhongzheng District

On the Facebook page for DC Tattoos it lists the following biographical information about Mayer:

"Oz Diamond was born in Israel and raised in the USA. He moved to Taipei, Taiwan in 2015 after finishing his apprenticeship in Los Angeles, CA. He was working out of his apartment in Ximending before partnering with Aphex Code. The two opened their tattoo studio nearby Taipei Main Station in 2017. Upon establishing their company, they recruited Cat Diamond as their tattoo studio manager."