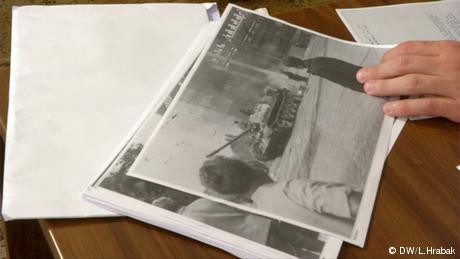 Soviet tanks led the way as more than 200,000 Warsaw Pact troops marched into the Czechoslovak capital during the night of August 20, 1968, ending the Prague Spring at the behest of the rulers in Moscow. The number of occupying troops would total more than 500,000.

The invasion put an end to the dream of a socialism in Eastern Europe that was based on freedom, above all freedom of expression. When he took office as the first secretary of the Communist Party of Czechoslovakia at the beginning of 1968, Alexander Dubcek began allowing journalists to ignore the official censorship orders. He supported free and democratic socialism in the hope that Soviet leaders in Moscow would allow the Czechoslovak Socialist Republic (CSSR) to forge its own way in the Kremlin-dominated Eastern bloc. But, ultimately, there was a greater fear that more freedom in the CSSR could lead to upheaval in neighboring Soviet-aligned countries.

The photographer Roland Berauer had spent the night of August 20, 1968, in a tent in Prague's Letna Park, above the Vltava River.

"We saw the armored cars drive past us towards the city center," Berauer said. He was working for the newspaper Skaut (Scout) and had set up an editorial office in the tent, with a typewriter and camera.

Berauer informed his colleagues of the invasion and urged them to stash their editorial equipment.

"The only thing I could do was to grab my camera and make my way into the city," Berauer said. He photographed the occupation as it began. When Soviet soldiers fired on demonstrators, killing many, he took cover in a painting-supply shop. Nearly 140 people would be killed as soldiers sought to put down resistance to the invasion. "It was terrible," he said.

Ondrej Matejka, first deputy director of Prague's Institute for the Study of Totalitarian Regimes, said the memory of the invasion endured in the Czech Republic.

"Sixty-eight continues to be referred to as this emotional shock associated with the occupation," said Matejka, a historian. "August 21 and the few days after, when people were able to defend themselves passively, when they really held together as a society, it was very, very strong."

Matejka said working through the events of 1968 had lost none of its relevance — especially with new files constantly appearing in the former state security archives of the CSSR and neighboring states in the Soviet sphere. State security in East Germany (GDR), in particular, had been closely monitoring Czechoslovakia since the spring of 1968, and had collected photos and reports from collaborators.

"It is on record for the first time that the secret service of a friendly nation has claimed the right to observe citizens of another country," said the Berlin archivist Oliver Strübing, who is currently working with more than 1,000 photographs. Moreover, after the invasion, the GDR agents offered their services to the CSSR's new leaders.

Historians who have reviewed the CSSR's state records in Prague and Bratislava, the capital of Slovakia, believe that the tentacles of the secret agencies extend to the present day. Last year, they published files stating that the current prime minister of the Czech Republic, Andrej Babis, had worked as an unofficial state security agent beginning in 1982. His lawsuit against the historians who revealed this was dismissed.

"Babis keeps repeating the word 'lies,'" said Petr Pithart, who led the CSSR's Czech constituent republic after the Iron Curtain fell and was member of the inner circle of Vaclav Havel, the president of post-Soviet Czechoslovakia and the independent Czech Republic. But there is no doubt that Babis collaborated with the CSSR's secret service. "We've all seen the documents on TV," Pithart said. He added that Babis had worked for a state foreign trade company in the CSSR and, after the Velvet Revolution, had managed to forge a successful entrepreneurial career with the help of the connections he had made.

Last year, the multibillionaire's party won nearly 30 percent of the nationwide vote. However, Pithart does not believe that the prime minister can escape the reports of his history as an informant without political damage. Pithart believes that, at the very least, Babis will not be remembered as a successful prime minister.

Matejka, of Institute for the Study of Totalitarian Regimes, expressed optimism that an intense review of the history is what is necessary to keep such people from running the country in the future. "Why do we now have a prime minister who used to be an informal collaborator with the secret police?" he said. "It is something that has much to do with the work that we have done in reviewing our history over the past 30 years. And there is a lot of work we have not done."