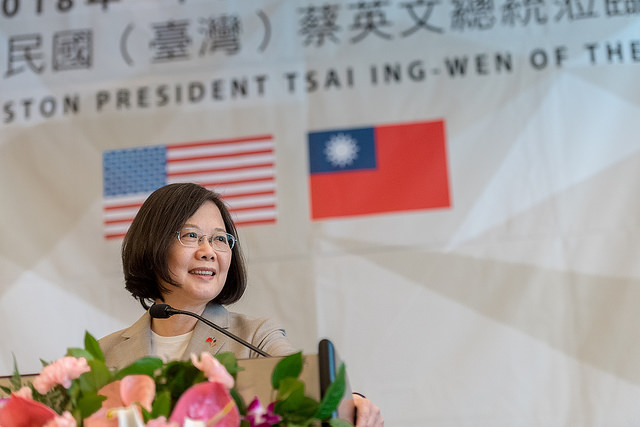 HOUSTON (CNA) -- Taiwan's President Tsai Ing-wen (蔡英文) arrived in the U.S. city of Houston on Saturday for a 27-hour transit stop on her way back to Taiwan after concluding a visit to two of Taiwan's diplomatic allies.

After her arrival in Houston, Tsai attended a welcome dinner hosted by Taiwanese expatriates, who gave her an enthusiastic ovation. The dinner was attended by more than 1,000 people, including several U.S. political dignitaries and congressmen.

Houston is the last stop on Tsai's nine-day trip to Paraguay and Belize, which involved a stopover in Los Angeles on the way to the two allies.

While in Houston, Tsai is scheduled to visit the Lyndon B. Johnson Space Center, the command post for American astronauts that is part of the National Aeronautics and Space Administration (NASA), according to Presidential Office spokesman Alex Huang (黃重諺), who gave a press briefing during the flight to Houston.

She will be the first Taiwan president to tour the government-run space center during a stopover in the U.S.

Huang said that at noon Sunday, President Tsai will attend a Taiwan business forum, after which she will head to the Texas Medical Center's innovation center for a visit aimed at gaining knowledge of the development of medical start-ups and related innovation industries.

The Texas Medical Center, founded in 1945, is the world's largest medical complex.

Tsai is scheduled to return to Taiwan on Aug. 20.