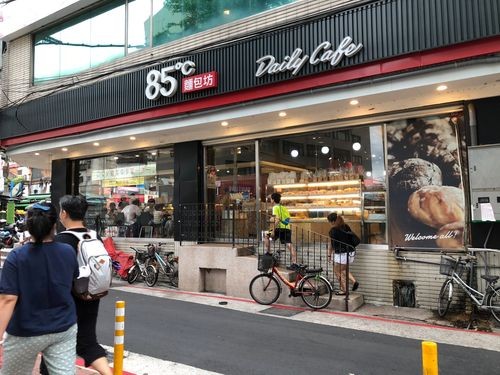 TAIPEI (CNA) -- The market capitalization of Gourmet Master Co., which owns the 85℃ Bakery Café chain, has dropped by about NT$10 billion (US$325 million) in the past three trading sessions on the Taiwan stock market in the wake of a blitz against the café chain by Chinese netizens and state media.

With an almost 20 percent decline in market value -- from NT$45.97 billion on Tuesday to NT$36.94 billion on Friday -- Gourmet Master has lost its place as the most expensive stock in Taiwan's tourism sector.

Gourmet Master shares began suffering heavy selling Wednesday, after Chinese netizens and state media labeled the chain as a pro-Taiwan independence company and threated to boycott its stores following a visit on Aug. 12 by President Tsai Ing-wen (蔡英文) to a branch in Los Angeles.

The stock continued to fall even after the Taiwanese bakery and coffee shop chain operator issued a statement Wednesday, saying it supported the "1992 consensus," a tacit agreement reached between Taiwan and China in 1992 that there is only "one China" and each side is free to interpret what that means.

According to market analysts, worry over Gourmet Master's bottom line still remains despite its statement in recognition of the 1992 consensus, which the Tsai administration does not recognize.

Since the China operations account for more than 60 percent of 85℃ Bakery Café's total's revenue, investors have been dumping the stock amid the controversy, analysts said.

In addition to the boycott threats against 85℃ Bakery Café stores in China, its products have been removed from some e-commerce and food delivery websites there, according to media reports.

In the first half of the year, Gourmet Master posted a 15.6 percent year-on-year increase in China sales to NT$7.83 billion, which accounted for 63.79 percent of its total sales. As of the end of March, Gourmet Master had 598 stores in China, 435 in Taiwan and 44 in the United States.

On the Taiwan market, Gourmet Master has been replaced by Thai restaurant chain operator TTFB Co. as the most expensive tourism stock with a share price of NT$236.00 at Friday's close.