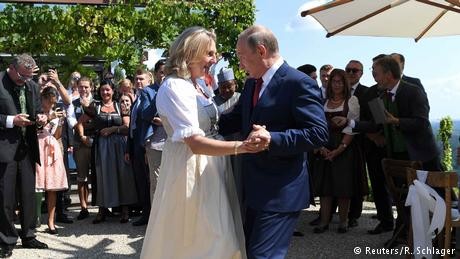 Russian President Vladimir Putin danced arm-in-arm with Austria's foreign minister, Karin Kneissl, at her wedding Saturday in southern Styria province, ahead of his meeting later in the day with German Chancellor Angela Merkel in Berlin.

Putin showed up at the wedding with a small Cossack men's choir to entertain about 100 guests.

Kneissl came under fire from political opponents for inviting Russia's strongman leader to her wedding at a time when relations between the West and Moscow are deeply frayed.

The two sides have sparred in recent years over Russia's annexation of Crimea, its support for separatists in eastern Ukraine, for Syrian dictator Bashar Assad as he executes a brutal military campaign, over charges that Moscow interfered in the last US presidential election, and, most recently, over British allegations that the Kremlin tried to kill former spy Sergei Skripal, who now lives in the UK.

Joerg Leichtfried of the opposition Social Democrats said Kneissl's decision to invite Putin was especially lamentable given that Austria currently holds the rotating presidency of the European Union. The invitation, he said, undermined the West in its dispute with Putin.

"All the more symbolic and harmful to court the Russian president in this manner," he said on Twitter.

Kneissl does not belong to a party, but she was appointed by the populist Freedom Party (FPO), which has a cooperation agreement with Putin's United Russia party.

FPO leader and Vice Chancellor Heinz-Christian Strache has expressed support for Russia and called for Western sanctions against Moscow to be lifted.

He said Putin's attendance would be great publicity for the country: "A better advertisement for Austria, its wonderful nature, dreamlike landscape and real life hospitality cannot exist!"

He also praised Kneissl as a "bridge builder" and congratulated her and her new husband — entrepreneur Wolfgang Meilinger — wishing them "all the luck in the world and eternal love."

Putin then left to join the German chancellor at the government's guesthouse in Meseberg, north of Berlin. The two leaders discussed Syria, Ukraine and the Nord Stream 2 pipeline.

The pipeline that would send Russian natural gas directly to Germany beneath the Baltic Sea has come under fire from Washington and some EU members. Oil and gas exports remain the lifeblood of the Russian economy.