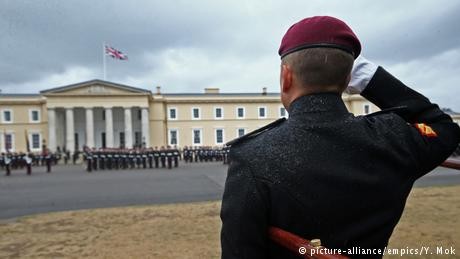 The incident allegedly took place on August 7, the BBC reported on Saturday and quoted Sandhurst commander Brigadier Bill Wright as saying he had "ordered an investigation by the Royal Military Police," the British Army's police force.

Waterboarding is the notorious method made public as one used by America's Central Intelligence Agency (CIA) when it interrogated al Qaeda suspects after airline hijackers attacked New York and Washington in 2001.

The Royal Military Academy Sandhurst is located in Berkshire, southwest of London. Britain has trained its Army officers there for over 200 years. Its alumni, past and present, include numerous high-ranked foreigners.

It was visited briefly by US President Donald Trump last month, and has royals, including Prince William and Prince Harry, among its officer graduates.

In 2009, former US President Barack Obama reiterated a ban on waterboarding, an interrogation technique already prohibited by the Geneva conventions, including the United Nation's 1984 anti-torture convention.

Trump, during his election campaign in 2016, said he still backed the method, but has reportedly not taken steps to revive its use.

In May, the European Court of Human Rights (ECHR) ordered damages to two suspects held and tortured from 2004 to 2006 at CIA "black sites" in Romania and Lithuania.

In 2014 a US Senate report - cited by ECHR judges - concluded that both "high-level detainees" had been subjected to "enhanced interrogation techniques" including waterboarding inside Europe.

Army 'talking about this'

The Sun newspaper quoted a Sandhurst source as saying: "Everyone in the Army is talking about this."

"There are lots of high jinks at Sandhurst. But people are asking whether it indicates there is a bullying culture there."

The Sun said the three cadets involved were currently on leave and had been moved into separate platoons while the investigation took place.

Media quoted Sandhurst's commander Wright as saying that anyone found to have "fallen short" of Sandhurst's standards would be dealt with "robustly," including dismissal, if warranted.