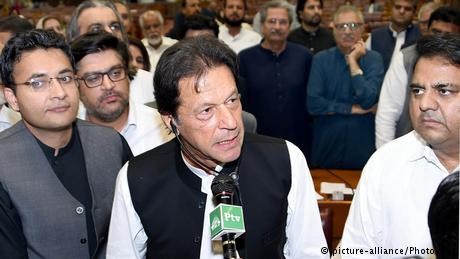 Imran Khan was inaugurated Saturday in Islamabad as Pakistan's 22nd prime minister. As an opposition leader, Khan always demanded the South Asian country get rid of widespread corruption, ensure social justice for all and focus on health, education and development.

Khan and his party, Pakistan Tehreek-i-Insaf (PTI), now have the opportunity to deliver what he has demanded from others over the past 22 years – and he has five years to show that he can deliver.

However, the prime minister faces a multitude of major problems that will need to be addressed immediately. Pakistan's economy is in bad shape. Its trade deficit is running into tens of billions of dollars and there is the risk of an imminent financial crisis.

If that were not enough, militancy, terrorism and tense relations with foreign powers have made things worse. From where will premier Khan start fixing these things?

Imtiaz Gul, a strategic analyst and executive director of the Center for Regional Security Studies (CRSS) in Islamabad, told DW the previous government claimed the economy was healthy and growth rates impressive.

But the facts appear to have changed. "The most testing challenge the Khan government will face will be an economic and financial one," said Gul, adding that paying back overdue loans to the International Monetary Fund (IMF) was just one of many economic issues faced by the new government.

Khan's party won the general election on July 25, but lacked a parliamentary majority. It had to get support from some smaller parties and independent parliamentarians in the new National Assembly to form a majority government.

Farooq Tariq, spokesman of the left-wing Awami (People's) Workers Party, told DW the economy and public expenditures must be looked after first.

Millions of children in Pakistan are out of school and the armed forces consume a major part of the budget. Allocation for education is no more than 2 percent. Private hospitals make billions annually, while public hospitals are insufficient and over-crowded with poor patients.

"What we need is a 10 percent budget allocation for education to increase the literacy rate, which is actually declining," said Tariq, adding that Pakistan needs better and more public hospitals.

Additionally, Imran Khan has promised voters the PTI government will create 10 million new jobs and build four to five million houses for the poor. "To promise what you can't deliver is deceitful. He won't be able to achieve this in his five-year term," said Tariq.

Pakistan so far has paid a huge human toll in its fight against militancy and terrorism. Thousands of Pakistanis have died in terror attacks all over the country since 2001.

Analyst Gul at CRSS said Pakistan's war against terror is linked to its foreign policy, which focuses on its nuclear-armed rival neighbor India and war-torn neighbor Afghanistan.

"Afghanistan, India and Pakistan are all facing proxy wars," said Gul. "These countries will have to tell their institutions to stop hurting one another's interests.”

"If Pakistan resumes dialogue with India and improves relations with Afghanistan, terrorism will be a monster easy to overpower."

Read more: Is the US bypassing Pakistan for new Taliban strategy?

Sadia Bokhari, a prominent human rights activist and director of Mohsinini Resource Center, an Islamabad-based NGO, told DW that Khan has the Pakistani army's "backstage partronage" and that the country would be a "controlled democracy" in in five years.

"We need de-escalation of militancy and extremism both in politics and society," said Bokhari, adding that other internal threats include depleted water resources and extremist and undemocratic elements flourishing in politics.

"To win the war on terror, fighting religious fundamentalism is a must. Khan has been soft on such forces and earned himself the name 'Taliban Khan,' he said, adding that religious extremism has become a social force and "election results proved it."

"In July, 5.6 million people voted for these extremists," said Tariq. "Moderate politico-religious parties are left behind. This never happened previously and is dreadful."

Iftikhar Gilani, a Delhi-based analyst and Strategic Affairs Editor of the newspaper DNA India, told DW that Prime Minister Khan could be a "solid partner" for talks.

Paraphrasing India's former National Security Advisor Shivshankar Menon, Gilani said, "everyone may have written Khan off as a 'stooge' of the army, but when a politician comes to power, the dynamics change."

Gilani added that it wasn't realistic for India to expect a lot from Khan too early.

"Khan as premier will have many other things to do before he can act to improve ties with India," said Gilani.

"Making peace, or even reaching out to India, may not be his first priority. His counterpart Narendra Modi would also like to have the next Indian general election behind him, before starting any substantive talks with Islamabad."

And it would be unrealistic to expect a conflict that has lasted over seven decades to be resolved in a few months. According to Gilani, "A strong section of the ruling BJP in India is looking to flare up tensions with Pakistan for political purposes in the 2019 general elections."

Ties with the US

Years ago, Pakistan was a close ally of the US. There was mutual trust and respect. However, relations between Washington and Islamabad are now as low as hardly ever before.

The US has scaled down or suspended military and development aid to Pakistan. Recently, even professional training programs for senior Pakistan Army officers in the US were scrapped.

Pakistan today has China as a new strategic partner, with Russia, Iran and Turkey also being approached as potential allies.

"Right now, there is very little left to be celebrated in Pakistani-US relations," Gul said.

Read more: How would the US deal with a 'Prime Minister Imran Khan'?

"Yet Pakistan's new government will need to continue working for an upswing in bilateral ties. Politicians and diplomats know – Keep working today for what can only be achieved tomorrow."