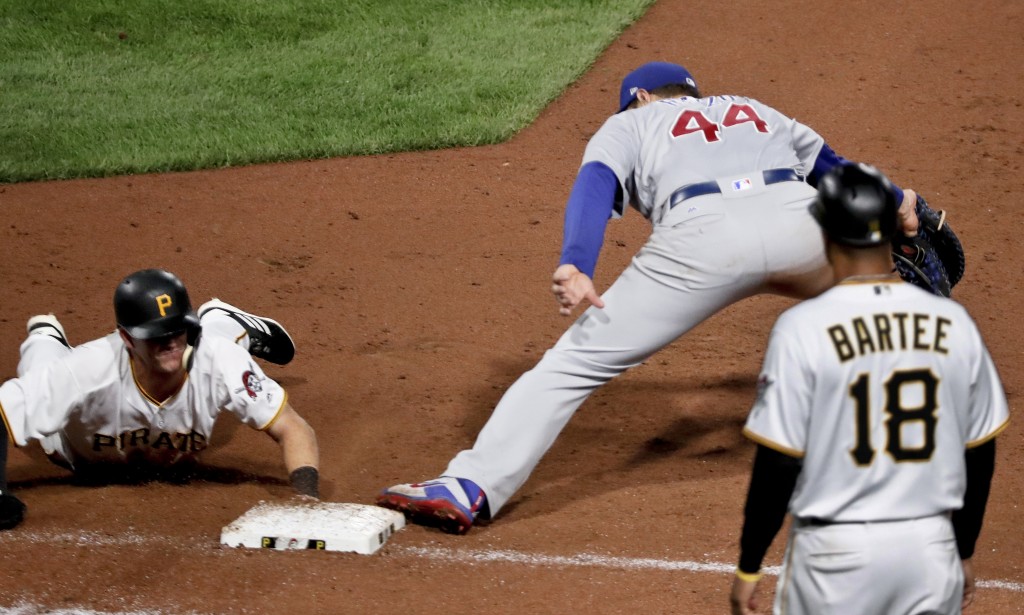 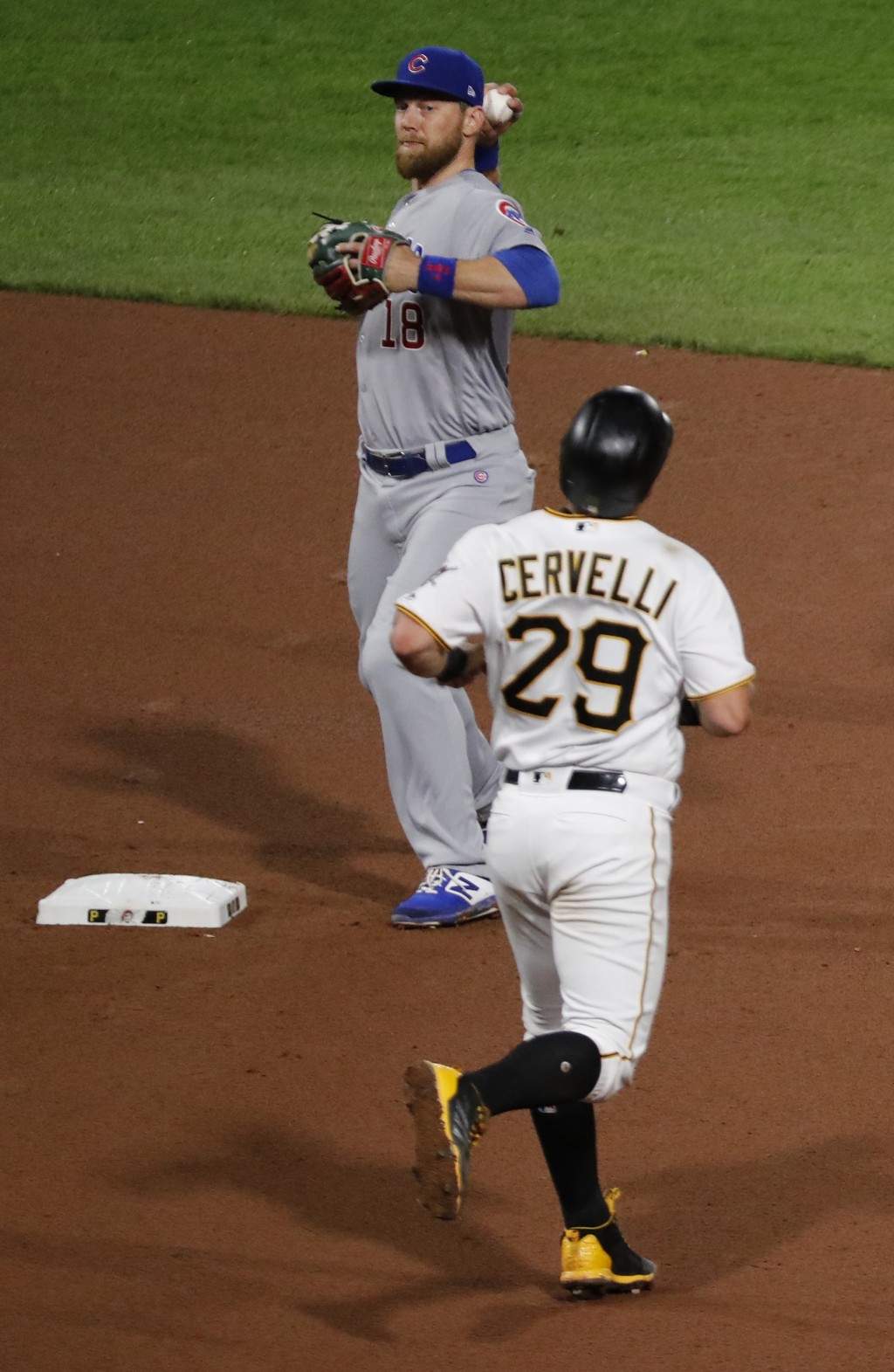 NEW YORK (AP) — The Chicago Cubs tied a major league record by turning seven double plays Friday night, including a game-ending effort by rookie third baseman David Bote on a grounder by David Freese to finish off a 1-0 win over the Pittsburgh Pirates.

The Cubs got six double plays on grounders — five with Cole Hamels pitching — and one on a line drive. The Elias Sports Bureau said the Cubs became the third team in big league history to turn seven DPs in a nine-inning game.

Pittsburgh put runners on first and second in the ninth before Jesse Chavez got Freese to ground to Bote. Having hit a game-ending grand slam last Sunday night to beat Washington 4-3, Bote again was in the right place to cap off a win. Bote stepped on third and threw to first base to end it.

Hamels (8-9) pitched seven solid innings. Kyle Schwarber hit a home run in the second off Trevor Williams (10-9). Chavez got his second save as the Pirates lost their fifth in a row.

The Cubs beat the Pirates by a 1-0 score for the second straight game.

The Cardinals won for the ninth time in 10 games and pulled within a half-game of the Brewers for the NL's second wild-card spot.

Milwaukee has dropped three of four.

Flaherty (7-6) gave up three hits, walked three and struck out seven. The Brewers had only two runners reach second base against the rookie, who has allowed two earned runs in his past 19 innings pitched.

Bud Norris earned his 24th save in 28 opportunities.

The Rockies have won six of seven, and they're 28-14 since June 28, tops in the NL over that span. And they've done it without the benefit of many blowouts: Friday's game snapped a franchise-long, 25-game streak in which the Rockies scored six runs or fewer.

Sean Newcomb (10-6) struggled for his second straight start as Atlanta's NL East lead dropped to one-half game over Philadelphia. Colorado began the night 1½ games out of the West lead.

Ronald Acuna Jr. reached on an infield single in the first against Freeland and scored on a sacrifice fly, but that was all Atlanta could muster against him.

Asdrubal Cabrera hit an RBI double off former teammate Noah Syndergaard during a three-run first inning, and Nola made the early lead stand up.

Nola (14-3) allowed one run on three hits with one walk while lowering his ERA in 2.24. The All-Star is even better at home, improving to 9-0 with a 2.00 mark in 12 starts in Philadelphia this season.

Pat Neshek pitched a scoreless ninth for his third save in as many chances.

Stanton hit his 31st homer of the season into a party deck behind the home bullpen in the bottom of the seventh, and a batter later, umpires pulled the teams off the field amid rain at Yankee Stadium. The game was called with one out in the seventh after a delay of 1 hour, 25 minutes.

Chad Green (6-2) pitched two scoreless innings for the win. In a scoring oddity, David Robertson got his third save despite not recording the final out of the game.

Rookie Gleyber Torres drove in the go-ahead run with a fielder's choice off Joe Biagini (1-7) in the fifth.

Toronto jumped on starter Lance Lynn for four runs in the first inning.

After throwing seven shutout innings against the Cubs Sunday only to watch Chicago win on a walk-off grand slam, Scherzer (16-5) left with a 5-0 lead and watched as the Nationals thwarted a Marlins rally.

Scherzer allowed at least one baserunner in four of six innings but worked out of trouble as Washington opened a six-game homestand with little margin for error as it seeks to get back into playoff contention.

Bryce Harper and Adam Eaton had three hits each for Washington, which has won two straight after losing seven of its previous nine.

Austin Dean homered for his first career hit for the Marlins, who have lost six straight.

BOSTON (AP) — Xander Bogaerts hit a two-run triple and added a pair of doubles, and Boston scored seven straight runs after allowing three in the first to beat Tampa Bay.

Jackie Bradley Jr. had two hits, including an RBI double in the sixth, and the Red Sox improved on the best record in the majors with their 87th victory.

Brian Johnson recovered after getting roughed up in the first with three runs on four hits and a walk. Johnson (4-3) didn't allow another run and pitched 5 2/3 innings before leaving after Joey Wendle's two-out double in the sixth — Tampa Bay's first hit since the first inning.

Wendle drove in two runs with a double in the first and Carlos Gomez had an RBI single for the Rays.

Yonny Chirinos (1-5) took over for Ryne Stanek in the second inning and allowed five runs on nine hits over six innings.

CINCINNATI (AP) — Phillip Ervin led off the 11th inning with a home run over the center field fence, lifting Cincinnati over San Francisco.

Ervin's third homer of the season and first career walk-off drive came on a 1-1 pitch from Ray Black (2-2).

David Hernandez (5-0) struck out two in a perfect 11th inning as the Reds ended a four-game losing streak.

Cincinnati starter Anthony DeSclafani pitched a season-high 7 2/3 innings, giving up six hits and one run with one walk and five strikeouts. He retired 11 consecutive batters from the fifth into the eighth.

Casey Kelly, making his 10th major league start and first since May 22, 2016, for Atlanta, pitched around giving up nine hits and a walk to allow just one run in 4 1/3 innings.

David Hess (2-7) allowed two runs in six innings for the Orioles. Trey Mancinci's RBI single in the eighth scored the only run for Baltimore, which has lost 11 of 13.

Cody Allen walked Renato Nunez with one out in the ninth. Pinch-runner Craig Gentry stole second before Tim Beckham flied out. Allen struck Joey Rickard for his 24th save in 27 chances.

Kyle Gibson (7-9) allowed three runs and eight hits and struck out five in seven innings for the Twins. Taylor Rogers earned his first major league save by striking out Jeimer Candelario with two runners on in the ninth.

Boyd (7-11) beat Minnesota on Sunday and had not allowed a hit over the previous nine innings until Austin singled to start the fifth on Friday. Boyd stranded Austin, but the Twins finally broke through an inning later.

Rosario homered to break the scoreless streak against Boyd. Austin started a four-run seventh with his second home run in five games for Minnesota, a towering shot that reached the second deck in left-center field.

Odor's two-run single capped a five-run outburst in the second inning off recently acquired Odrisamer Despaigne (2-1), the 14th starting pitcher used by the Angels this season.

Drew Hutchison (2-2) struck out six and allowed two runs over five innings in his third start for the Rangers. Jose Leclerc struck out the side in the ninth for his fourth save.

Gallo's double into the right-field corner made it 2-0 before he scored on a groundout by Isiah Kiner-Falefa. Odor's two-run single was the fourth consecutive Rangers hit after that, and he added a sac fly in the seventh inning.

Delmonico went 2 for 4 and had a career-high five RBIs. Tim Anderson went 3 for 3 with a walk and two stolen bases for Chicago, which has won eight of 14.

Abreu's homer was his 22nd. The White Sox have homered in a season-high nine straight games, totaling 13 during that stretch.

Yoan Moncada started the rally in the seventh with a walk. Yolmer Sanchez then followed with a slow grounder to shortstop that Alcides Escobar booted for an error — snapping the Royals' 16-game errorless streak.

Right-hander Jason Adam came on to replace Tim Hill (1-4) and Abreu hit the first pitch into the left-center bleachers to give the White Sox a 5-3 lead.