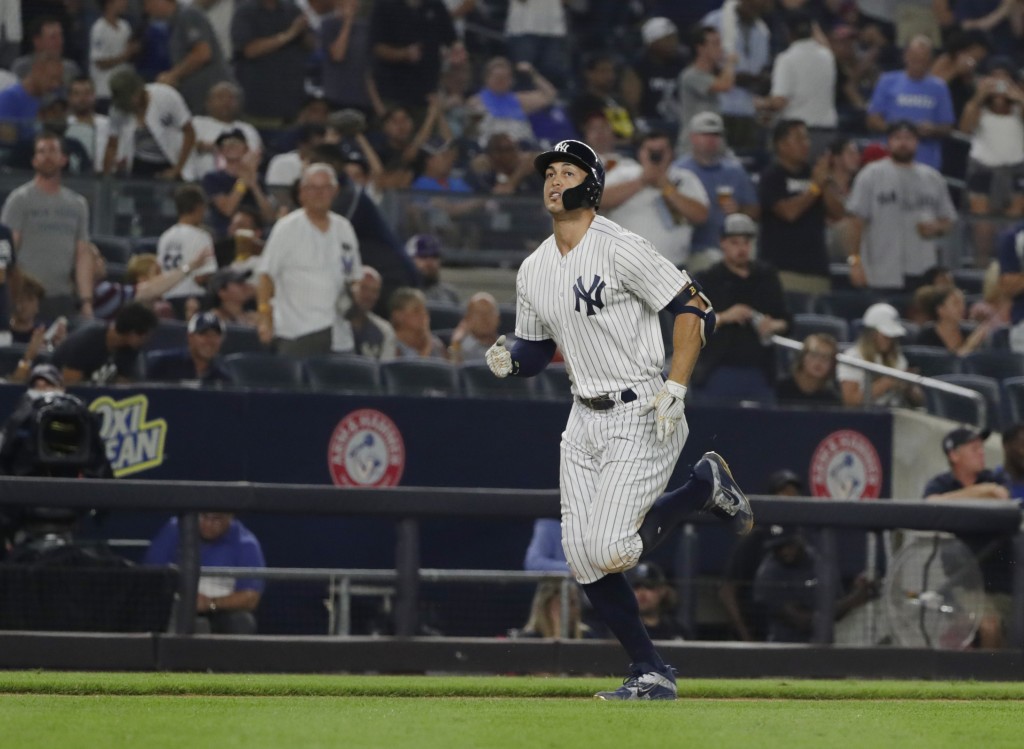 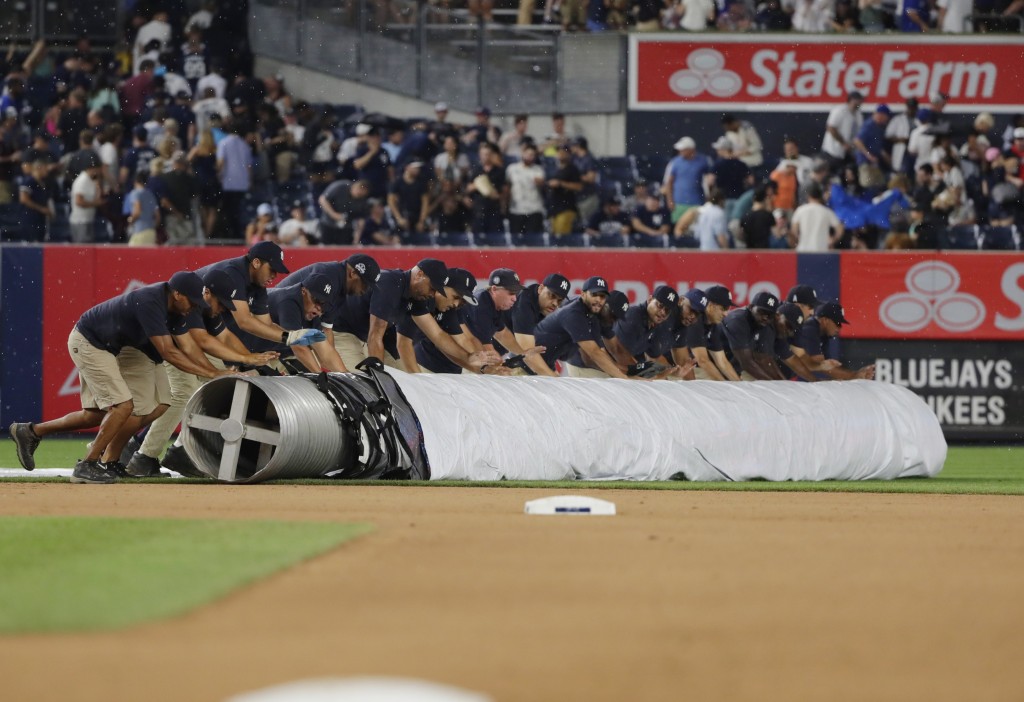 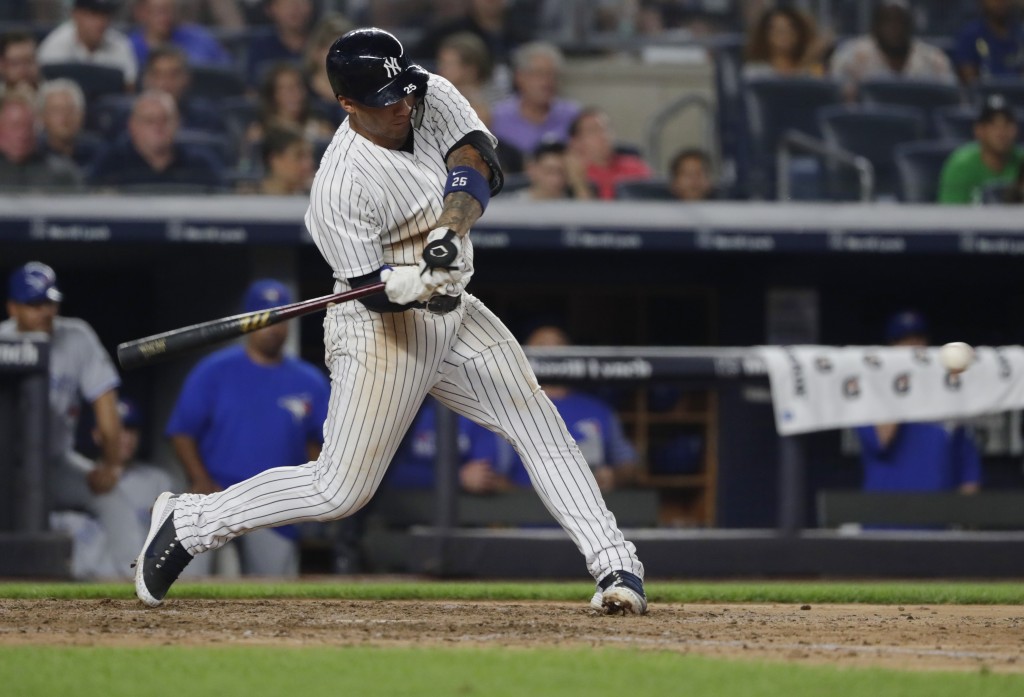 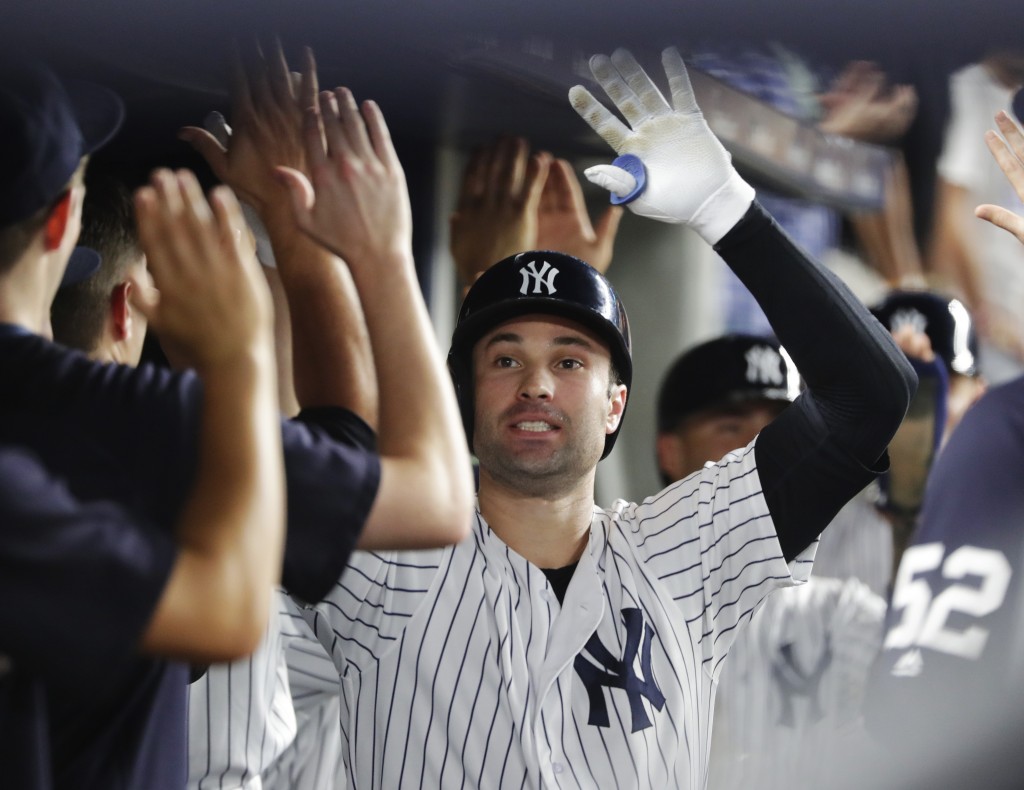 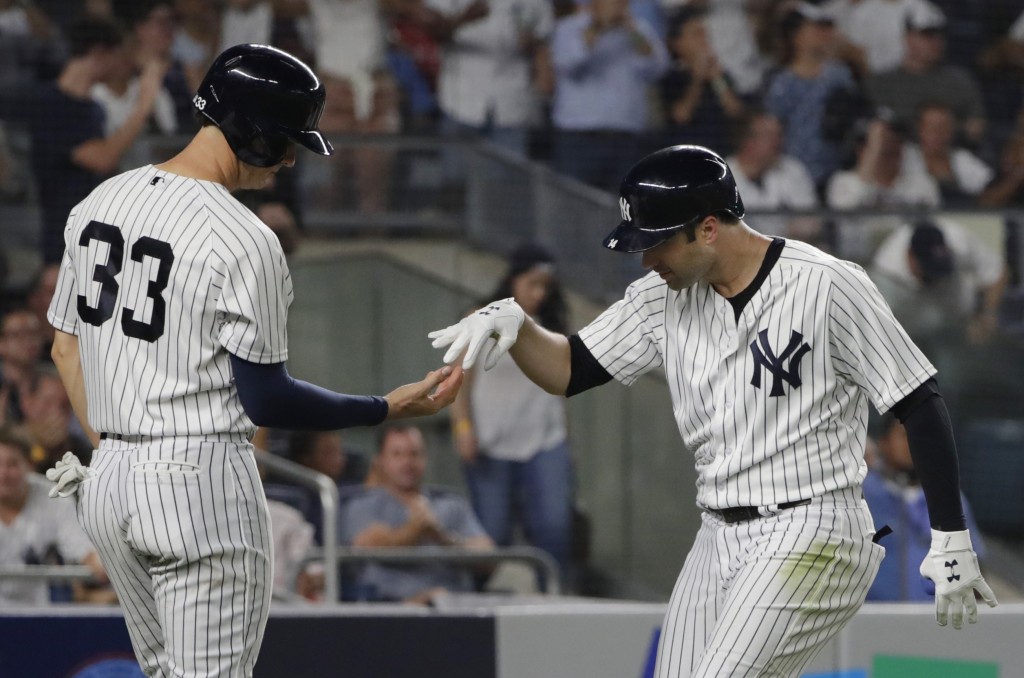 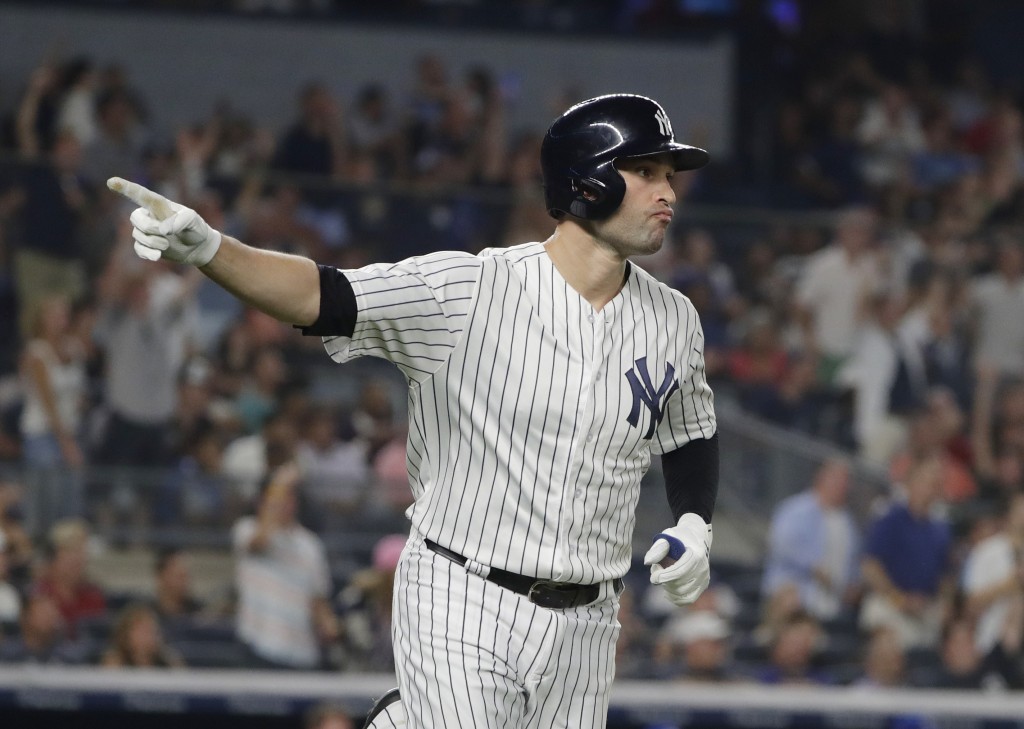 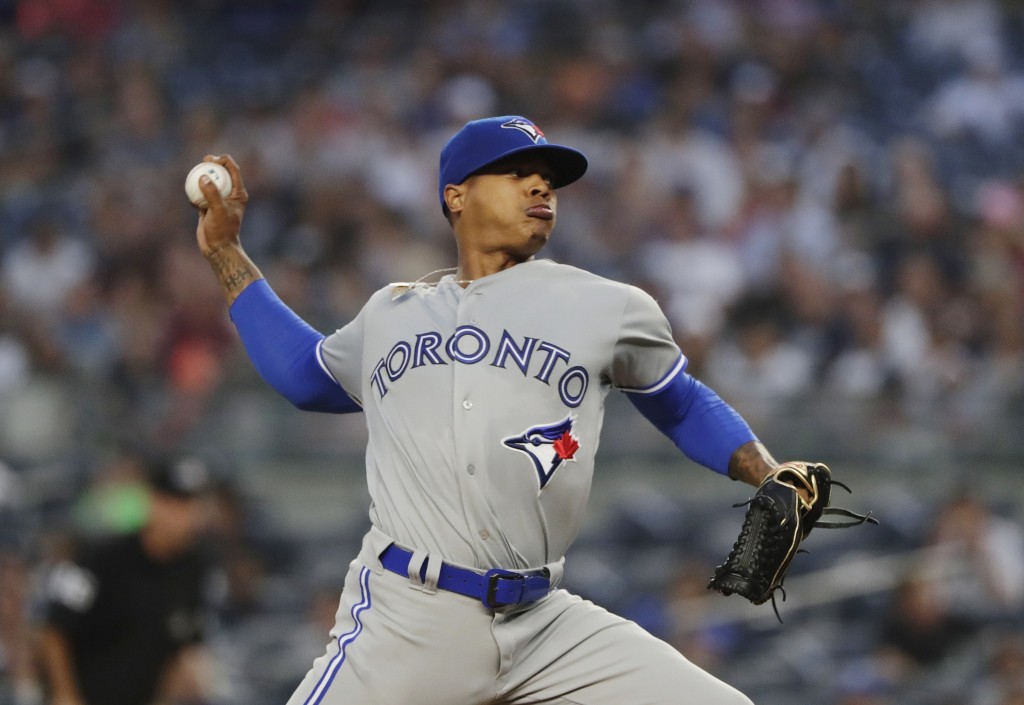 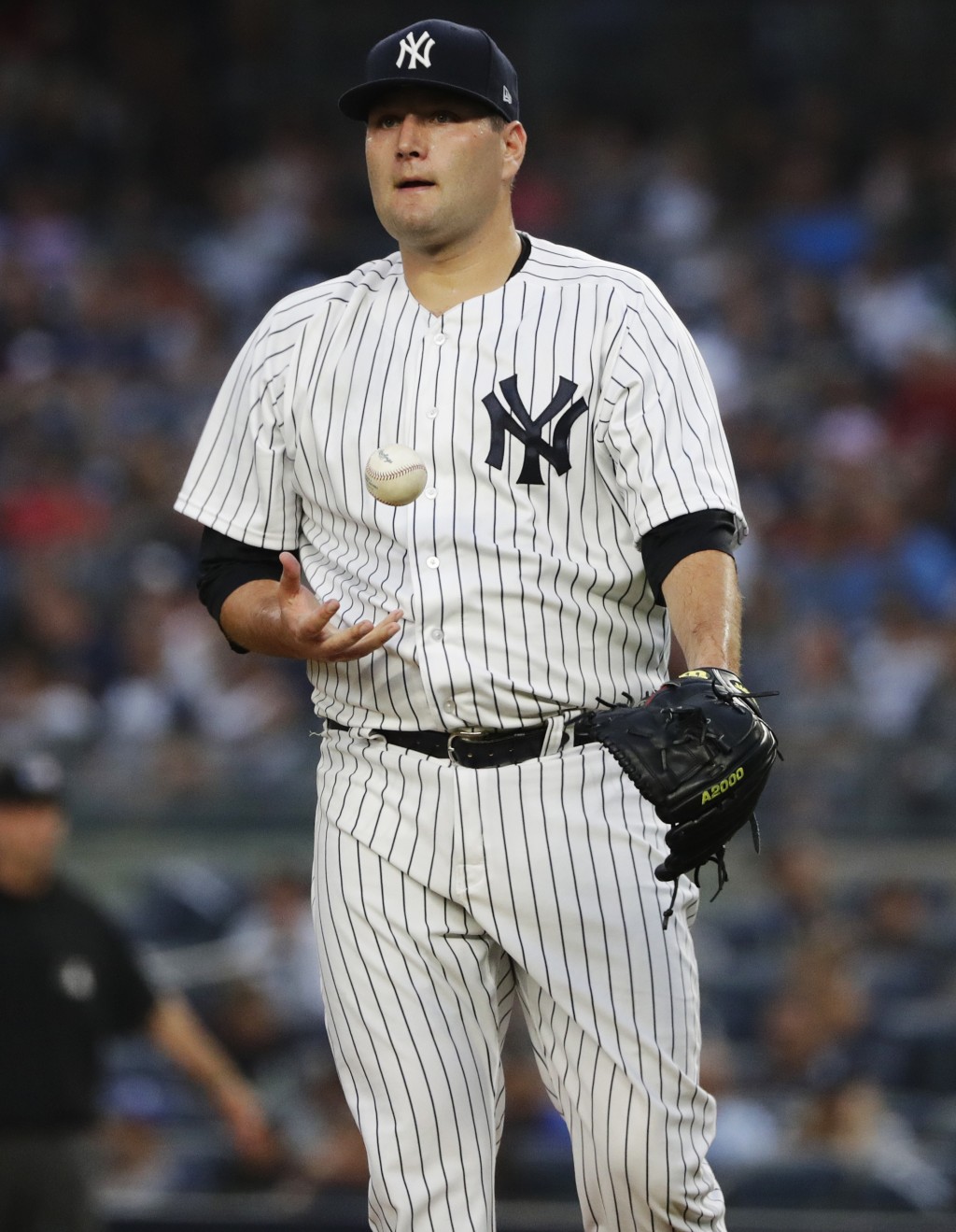 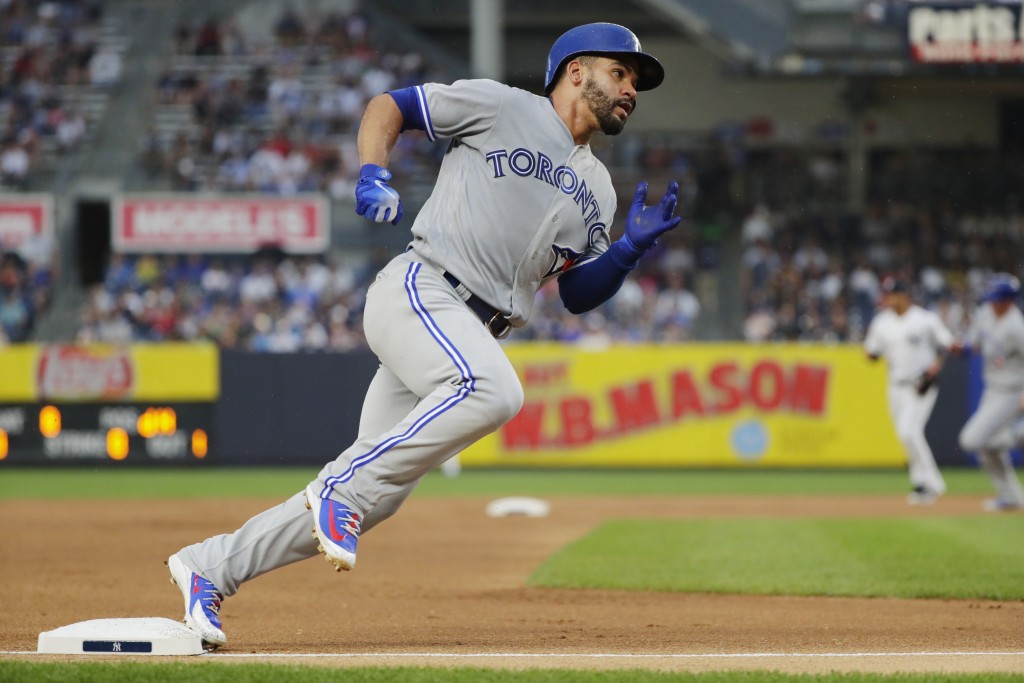 Stanton hit his 31st homer of the season into a party deck behind the home bullpen in the bottom of the seventh, and a batter later, umpires pulled the teams off the field amid rain at Yankee Stadium. The game was called with one out in the seventh after a delay of 1 hour, 25 minutes.

Chad Green (6-2) pitched two scoreless innings for the win. In a scoring oddity, David Robertson got his third save despite not recording the final out of the game.

Rookie Gleyber Torres drove in the go-ahead run with a fielder's choice off Joe Biagini (1-7) in the fifth.

Toronto jumped on starter Lance Lynn for four runs in the first inning. Kendrys Morales and Kevin Pillar each had RBI singles before Randal Grichuk walked to load the bases with two outs and Aledmys Diaz followed with a two-run single.

The Yankees, who were limited to just six runs in their previous three games against Tampa Bay, cut the lead in half in the bottom of the inning against starter Marcus Stroman. Aaron Hicks worked a two-out walk and scored from first when sure-handed center fielder Pillar misplayed Didi Gregorius' triple in the gap. Miguel Andujar added an RBI double.

Torres doubled and Greg Bird worked a 10-pitch walk off Stroman in the fourth before Walker delivered his shot. It was Walker's seventh homer of the season and put New York ahead 5-4.

Stroman gave up five runs and six hits in four innings. A graduate of Patchogue-Medford High School on Long Island, Stroman is winless in seven starts in the Bronx.

The Blue Jays chased Lynn in the fifth when Curtis Granderson doubled and scored on Devon Travis' single.

Lynn was charged with five runs and six hits in four innings. He struck out five but walked three.

IT'S UP IN THE AIR

Blue Jays general manager Ross Atkins said manager John Gibbons will lead the team through the remainder of the season before his future is addressed. Gibbons said last week he probably would not want to manage the club through a full rebuild.

Atkins thought the rumors regarding Gibbons' future with the club were becoming a distraction.

"This game's about the players, it's about fans. It's not about Gibby, it's not about me. It will never be," Atkins said.

An aging roster, injuries and lack of production has Toronto in fourth place in the AL East, 31 ½ games behind first-place Boston.

Gibbons' contract runs through the end of the 2019 season with a club option for 2020. He's in his second stint as Blue Jays manager after returning to team in 2013, and led Toronto to the 2015 and 2016 AL Championship Series.

Blue Jays: C Luke Maile was placed on the paternity list before Friday's game. OF Billy McKinney replaced Maile on the roster.

Yankees: Manager Aaron Boone said there was some improvement with C Gary Sanchez (groin) and OF Aaron Judge (fractured right wrist). Sanchez increased his running Friday afternoon, which he didn't see. "I was out there for his defensive work where he was throwing the bases. He looked really good," said Boone, who added Judge played some catch. "I think there was a chance he could have a bat in his hand and doing some dry swings. We'll see if that happens or not. Both guys progressing, so hopefully, it's out there."

Yankees: RHP Luis Severino (15-6, 3.27) is coming off a tough start in have up four runs in four innings for the loss against the New York Mets on Monday. He's 3-0 with a 2.19 ERA in his last 4 starts against Toronto.