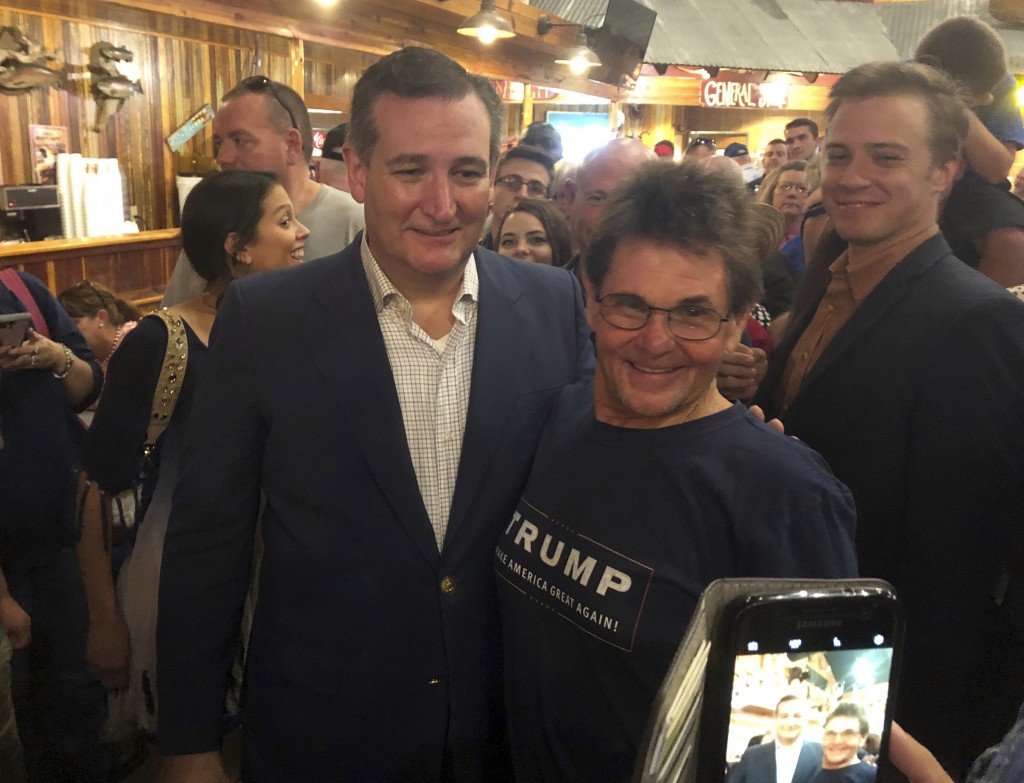 TEMPLE, Texas (AP) — Gary Malcik wore a Trump T-shirt as he waited in a long, post-rally line to pose for pictures with Ted Cruz.

It was a far cry from the waning weeks of the 2016 GOP presidential primary, when Donald Trump supporters repeatedly heckled the Texas senator at campaign events, and from that year's Republican National Convention when Cruz was booed for refusing to endorse the party's nominee. But Malcik, 69 and self-employed, said he's glad to no longer have to choose sides.

Now facing a high-profile re-election fight with Democratic Congressman Beto O'Rourke, Cruz says he'd welcome Trump coming to Texas before November — though he shrugged off suggestions he needs the president's coattails to win.

"In the last year and a half, we have seen major victories for Texans," Cruz said moments after posing with Malcik at a barbecue restaurant whose walls were cluttered with hunting trophies in Temple, 130 miles (210 kilometers) south of Dallas.

Trump has visited Texas five times as president, including after Hurricane Harvey and to address the National Rifle Association's annual convention. Still, the prospect of his potentially boosting candidate Cruz creates another twist in the awkward dance of one of the leading odd couples in all of politics.

The off-again, on-again relationship lays bare just how uncomfortable Trump is for Republicans who want to demonstrate loyalty to someone the Republican base loves, but who also thrived before his rise — and hope to continue to do so after he's gone. Complicating matters is Cruz's refusal to rule out running again for president after Trump leaves the White House, even if the political contortions get awkward in the meantime.

"It gets awfully hard to talk glowingly about a guy when you openly pined for his job," said Joe Brettell, a Republican strategist in Houston who nonetheless conceded that Cruz "has no other choice. Donald Trump's going to be president for at least two more years."

Cruz spent the early months of the 2016 presidential race praising Trump, betting that the reality TV star's supporters would flock to him if their candidate's meteoric rise flamed out. The two later clashed bitterly as Cruz finished second for the GOP nomination, with Trump suggesting that Cruz's Cuban-born father had a hand in John F. Kennedy's assassination.

Cruz responded that Trump was "utterly amoral" and refused to endorse him during their party's convention in Cleveland, only to suddenly announce his support barely a month before Election Day 2016. Neither has apologized for their earlier harsh words, but Cruz says his office now speaks to the White House weekly — sometimes daily — about policy.

"There's no doubt my relationship with Donald Trump has had its ups and downs," Cruz said, adding that, since 2016, on issues like pulling out of the Paris climate agreement, "I've been very grateful that the president has listened to me and agreed with my position."

The White House hasn't commented on the prospect of Trump campaigning in Texas. But the president has dropped into a number of battleground states, visiting Pennsylvania, Alabama and Ohio before elections there this year.

O'Rourke, a one-time punk rocker who has spent the past 18 months visiting all of Texas' 254 counties, has consistently outraised Cruz, including raking in $10.4 million to the incumbent's $4.6 million during the three-month period through June. His campaign declined to comment about the prospect of Trump coming to Texas.

Cruz remains favored in the race, but told hundreds who thronged the Temple rally, "We've got a battle on our hands."

"The far left is angry," he said. "They're energized and they're filled with rage and fury at the president. That's dangerous."

In one indication that Cruz still hasn't lived the presidential race down, a protester interrupted him with cries of "Lyin' Ted," Trump's trademark 2016 insult for Cruz. And, when the senator accused O'Rourke of being open to impeaching the president, a man bellowed "For what?" dissipating the anti-O'Rourke gasps Cruz was hoping to elicit.

Olga Bradley, a retired Veterans Administration employee, said she came to the Temple rally because she wanted to be reassured that Cruz would defend Trump after his past opposition. She said she'd repeatedly ignored phone calls seeking support from the Cruz campaign while she awaited further evidence.

"We want politicians who support the president," said Bradley, 72, who agreed with a friend wearing a "Make American Great Again" baseball cap who quipped that a joint Trump-Cruz rally in Texas would be so well attended that "they'd better have it in a 10,000-acre field."

Malcik said he wasn't worried about Trump-Cruz awkwardness but is afraid that O'Rourke can stay within striking distance of Cruz.

"If Trump came down it would be a lot easier," Malcik said. "He'd really pull him over the finish line."