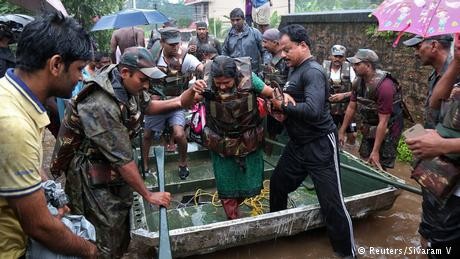 At least 164 people died in flooding in the India's southern state of Kerala, officials said on Friday. While Kerala is regularly pounded by monsoons, this year's flooding, exacerbated by flash landslides, is the worst in nearly a century.

Despite the torrential rain stopping on Friday, more downpours are expected in the coming days. At least one irrigation dam burst, causing a deadly landslide since the flooding started last week. Another 80 reached danger levels, according to Vijayan.

Authorities deployed helicopters and navy boats as residents gathered on the rooftops or higher ground areas. The army, navy and coastguarde were involved with the evacuation. At least 6,500 remained stranded as of Thursday evening.

On Monday, Indian media reported that a family was saved by its dog. The dog apparently started barking in the middle of the night, waking the household and prompting them to leave the house minutes before it was destroyed by a landslide.

"I went out to see and we had to just rush out of the house," Mohanan P. told Indian news network NDTV.

The entire family, including the dog, is now safe in one of the relief camps.