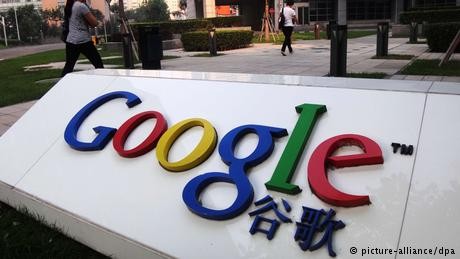 According to online news site The Intercept, more than 1,000 employees of Google have signed a letter demanding that the company come clean about an alleged secretive search engine it is building for use in China. The app is said to comply with Chinese government censorship guidelines.

The search app would ban information related to human rights, democracy and religion. These are topics that the government censors through China's so-called Great Firewall.

A Google employee, who requested anonymity and who admitted to taking part the protest, confirmed the letter's existence and its contents, DPA news agency said. Google has so far refused to comment on the matter.

The letter reportedly calls on executives to review ethics and transparency at the tech giant. Employees complained that most of them found out about the project, which has been nicknamed "Dragonfly," through media reports.

"We urgently need more transparency, a seat at the table, and a commitment to clear and open processes: Google employees need to know what we're building," the letter read.

Only a few hundred of 88,000 employees at Google have been informed of the secret project, The Intercept claims.

Employees urged the internet giant's leadership to recognize a "code yellow situation," an internal alert that signifies a crisis, The Intercept reported. They said the plans could be in violation the company's ethics code, which bars it from building or deploying technology that violates human rights.

"Currently we do not have the information required to make ethically informed decisions about our work, our projects, and our employment," the letter read.

Google has faced China's censorship before when it withdrew from the country in 2010 in response to its censorship norms. But recently, the tech giant has made inroads in the Chinese market.