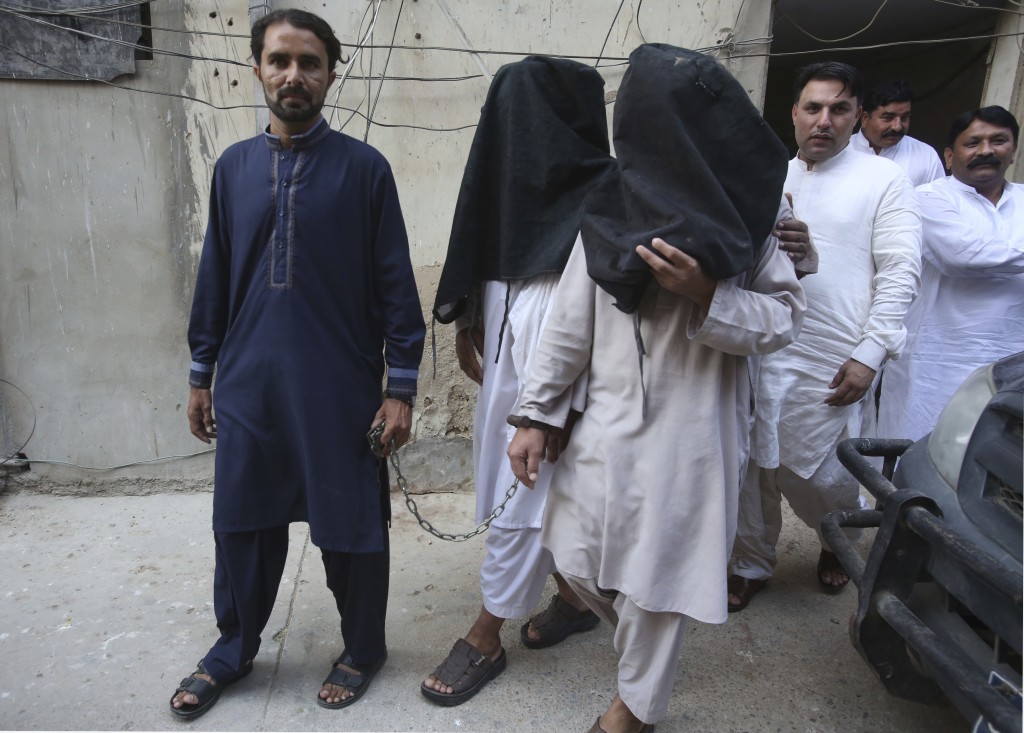 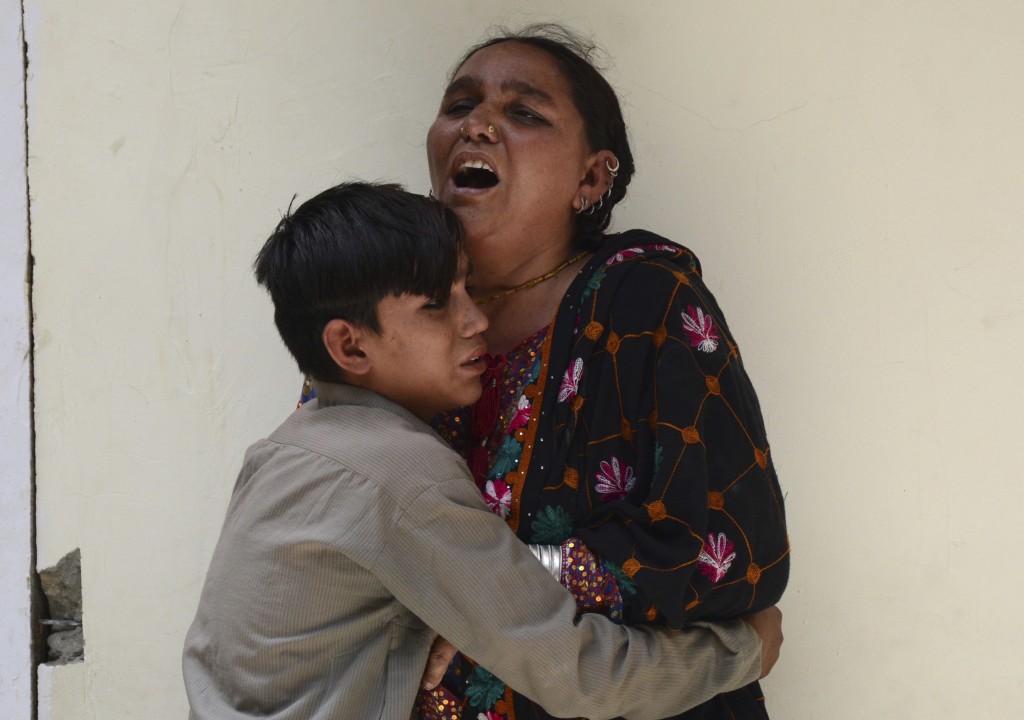 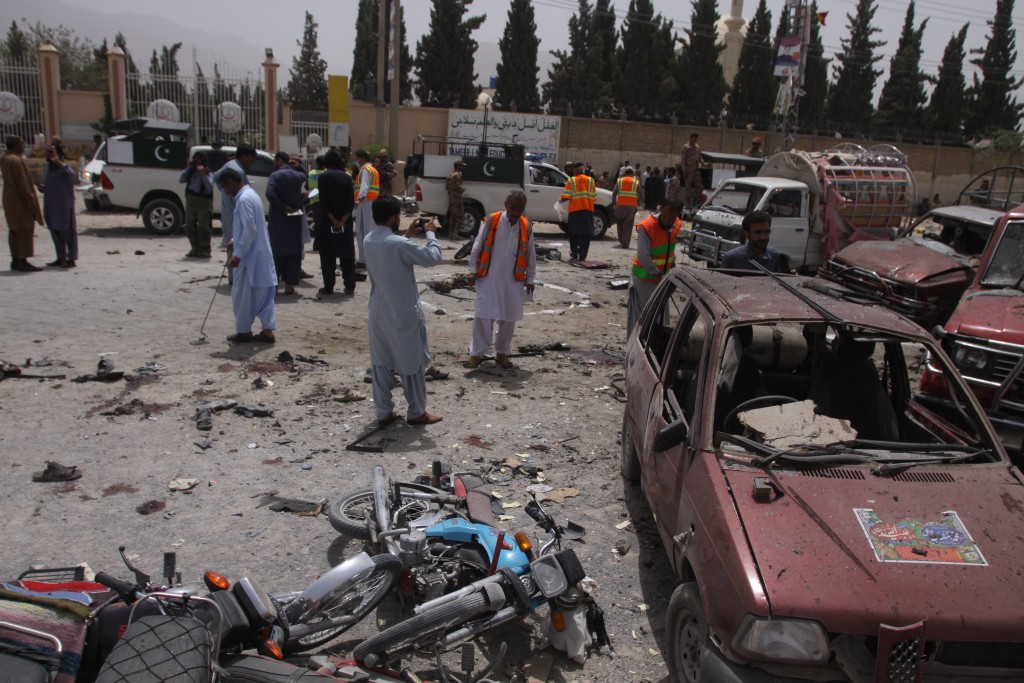 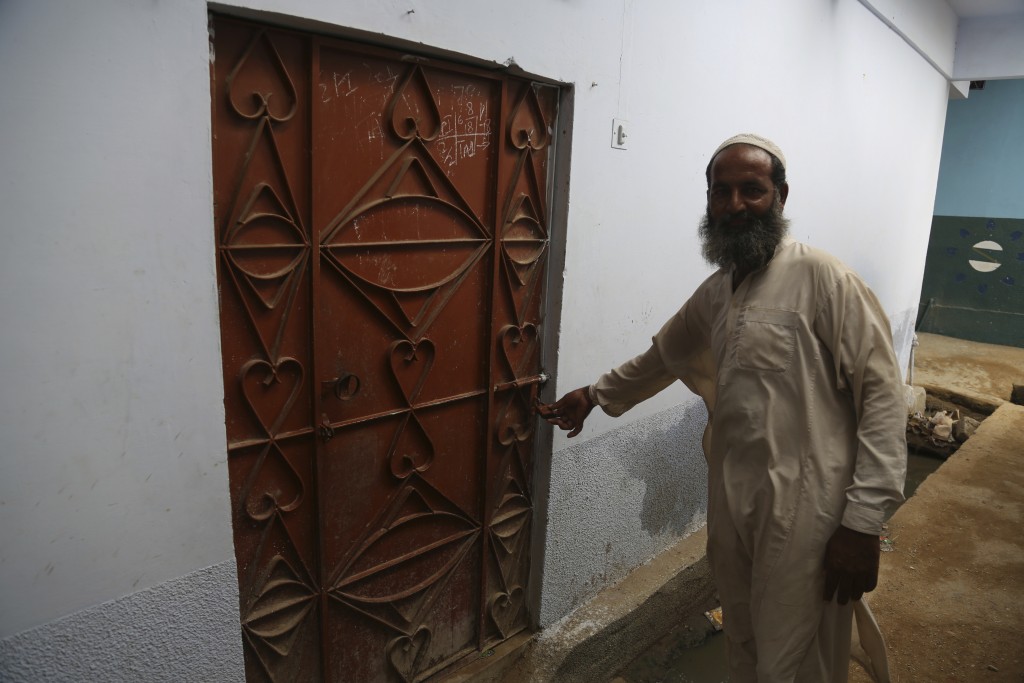 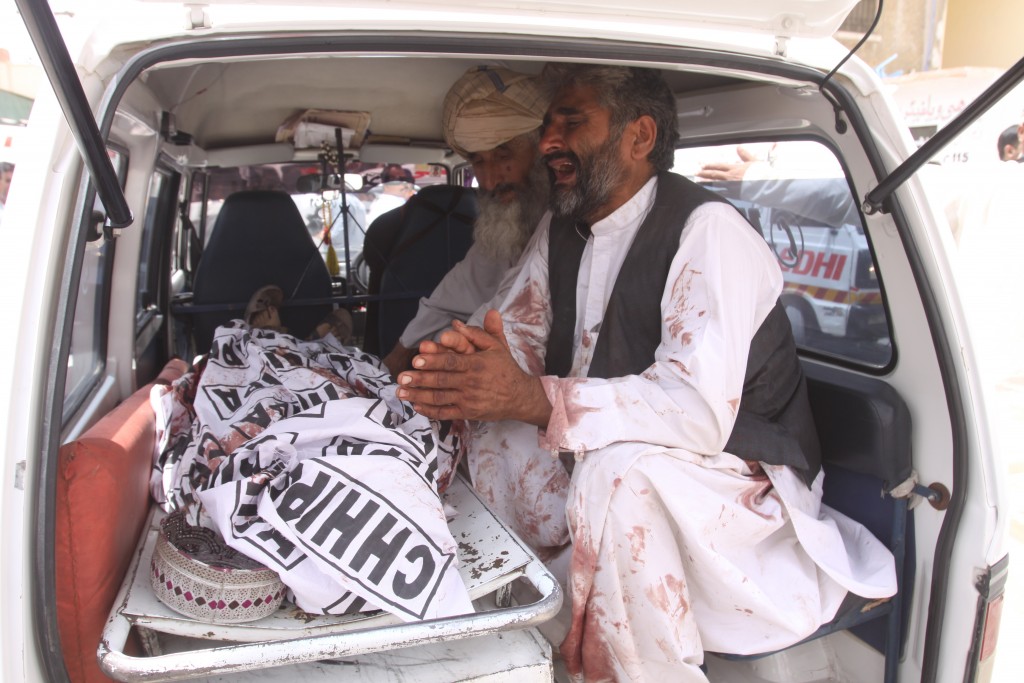 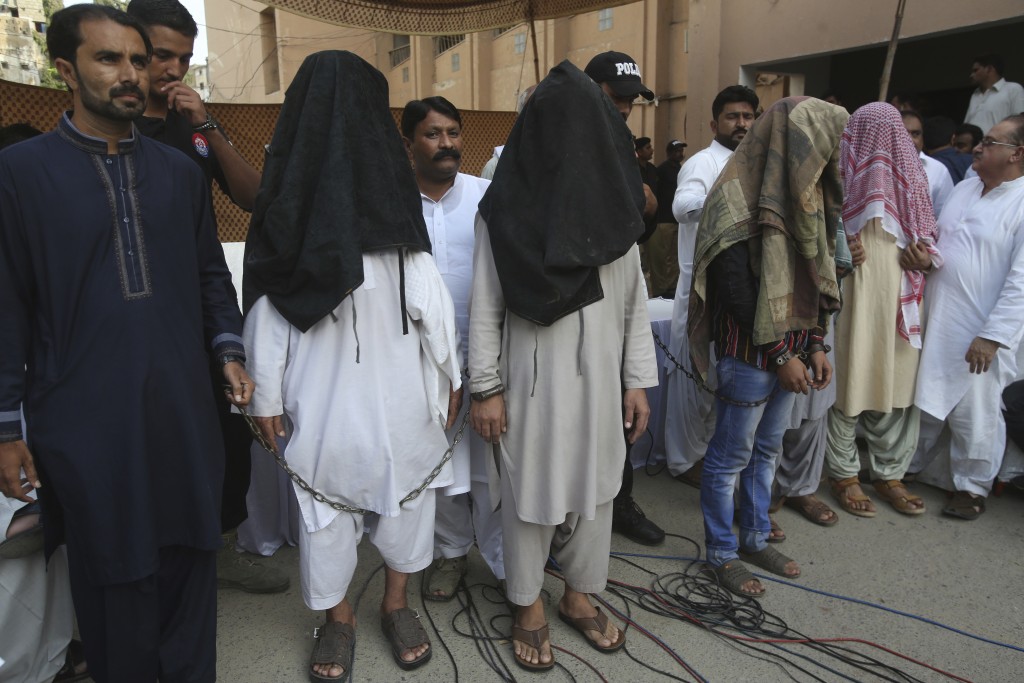 DHABEJI, Pakistan (AP) — Hafeez Nawaz was 20 years old when he left his religious school in southern Karachi to join the Islamic State group in Afghanistan. Three years later he was back in Pakistan to carry out a deadly mission: with explosives strapped to his body, he blew himself up in the middle of an election rally last month, killing 149 people and wounding 300 others.

The attack in southwestern Baluchistan province near the Afghan border just days before Pakistan's July 25 parliamentary elections has cast an unwelcome spotlight on Nawaz's tiny village of Dhabeji, where the presence of an IS cell in their midst has brought the full weight of Pakistan's security apparatus down on its residents.

"Now we are all under suspicion," said Nawaz's neighbor, who gave only his first name, Nadeem, for fear of the local police. "The security agencies now consider Dhabeji a security threat area."

Nawaz's trajectory from religiously devout student to jihadi and suicide bomber is an all too familiar one in Pakistan.

Since battlefield successes routed the Islamic State group from its strongholds in Syria and Iraq, hundreds of Pakistanis who traveled to join the extremists' so-called "caliphate" are unaccounted for and Pakistan's security personnel worry that they, like Nawaz, have gone underground waiting to strike.

Sitting in his office in a compound surrounded by high walls and heavily armed guards, Karachi's counterterrorism department chief, Pervez Ahmed Chandio, said IS is the newest and deadliest front in Pakistan's decades-old war on terror.

"It is one of the most dangerous threats facing Pakistan and we are ready to fight this war," he said.

It's the amorphous nature of IS that has counterterrorism officials like Chandio most worried. When one cell is disrupted another emerges, sometimes within weeks and often in an unrelated part of the country.

"It's what they don't know that is the most worrying for counterterrorism departments around the country," said Mohammad Amir Rana, executive director of the Islamabad-based Pakistan Institute of Peace Studies, which tracks militant movements in the region. "Its hideouts, its structure, its strategy are all unknown. They are an invisible enemy who is defeated in one area, only to resurface in another."

A U.N. Security Council report earlier this year warned of the changing face of IS, saying the extremist group was "entering a new phase, with more focus on less visible networks of individuals and cells acting with a degree of autonomy."

Hafeez Nawaz was just such a case.

Three years ago, he joined his older brother, Aziz, to study at Saddiquia Madrassa in Karachi's Shah Faisal Colony neighborhood, an area where the level of sectarian violence at the time was so brutal that even police could not enter. A crackdown by paramilitary Rangers has since led to the arrest and killing of hundreds of militants and criminals.

Today, the religious school is among 94 madrassas under surveillance in Karachi and elsewhere in southern Sindh province, Chandio said. They have been identified as breeding grounds for radicalism, schools where jihadis have emerged and that perpetrators of attacks attended. Many are financed by oil-rich Saudi Arabia to promote the rigid Wahabi sect of Islam practiced in the kingdom, Chandio said. The origin of the money, whether from the Saudi government or Saudi philanthropists, is not clear but the teachings at these schools espouse a rigid interpretation of Islam and the superiority of Sunni Islam.

It was at Saddiquia Mosque that Nawaz's brother, Aziz, fell in with a crowd of would-be jihadis and was persuaded to travel to Afghanistan's Spinboldak region on the border with Pakistan in 2014 to join the Taliban. But his allegiance was short-lived as commanders squabbled and Aziz returned to Pakistan. Once back home, he inducted his younger brother, Hafeez, into the jihadi circle but this time, it was the Islamic State group that held sway, said Chandio, who was part of the counterterrorism squad that, using little more than body parts and grainy cell phone pictures, identified Hafeez Nawaz as the suicide bomber behind the July 13 election rally attack.

Chandio learned from the brothers' father that Nawaz and Aziz packed up their three sisters and their mother and moved them to Afghanistan in 2016 to live among an Islamic State affiliate there. Two of the sisters have since married IS operatives. Their youngest brother, Shakoor, who was sent by their father a year later to plead with them to return, remains in Afghanistan, as does Aziz.

Chandio suspects 19-year-old Shakoor is now an IS operative and could be the next suicide bomber. He said Shakoor fits the criteria: a young man in his late teens or early 20s, religiously devout and susceptible to radicalization.

Hafeez Nawaz was just 23 when he walked into the middle of the election rally in Baluchistan's Mustang area and detonated the suicide vest that sprayed shrapnel throughout the tent packed with local tribesmen.

Nawaz's father and his oldest brother, Haq Nawaz, are now in custody, caught trying to flee to Afghanistan, Chandio said.

Some analysts say the threat posed by the Islamic State group in Pakistan is, at least in part, the result of the country's bewildering attitude toward the toxic mix of militant groups that operate in the country.

Since 2004, the Pakistani military has killed or driven thousands of militants from their mountain redoubts in the tribal regions that border Afghanistan, suffering thousands of casualties in those battles. Yet Pakistan allows banned groups, some with a long history of sectarian violence, to re-emerge and operate under new names, and known militants to move about freely.

"This is a sad reality of Pakistan: if militant leaders are useful to the state's interests, then they're free to do as they wish," said Michael Kugelman, deputy director of the Asia Program at the Washington-based Wilson Center. "So long as terrorist leaders roam free, there's still a very big terrorism problem."

A case in point is the outlawed Lashkar-e-Taiba, a global terrorist organization that has been resurrected as Jamaat-ud-Dawa, a group known to have sent scores of fighters to Syria and Iraq to bolster the Islamic State group, according to Pakistani intelligence officials, who spoke on condition of anonymity to discuss the sensitive issue.

Hafiz Saeed, the co-founder of Lashkar-e-Taiba, who has a $10 million U.S.-imposed bounty on his head, lives unrestricted in Lahore, the capital of Pakistan's Punjab province, where 60 per cent of the country's 200 million people live.

Just last month the U.S. State Department declared another of the group's senior commanders, Abdul Rehman al-Dakhil, a global terrorist, who poses "a significant risk of committing acts of terrorism that threaten the security of U.S. nationals or the national security, foreign policy, or economy of the United States."

Dakhil, who also now lives freely in Lahore, was arrested in Iraq in 2004 and held in U.S. custody in Iraq and Afghanistan until 2014, when he was returned to Pakistan, where he spent a brief stint in prison before being released.

"ISIS is cut from the same basic ideological cloth as the other Islamist terror groups in Pakistan," said Kugelman, using an alternate acronym for the Islamic State group. "Marriages of convenience can never be ruled out, whether in terms of operational partnerships or cost-sharing. ... We've seen a model of Afghanistan-focused ISIS members linking up with local facilitators in Pakistan to stage attacks."