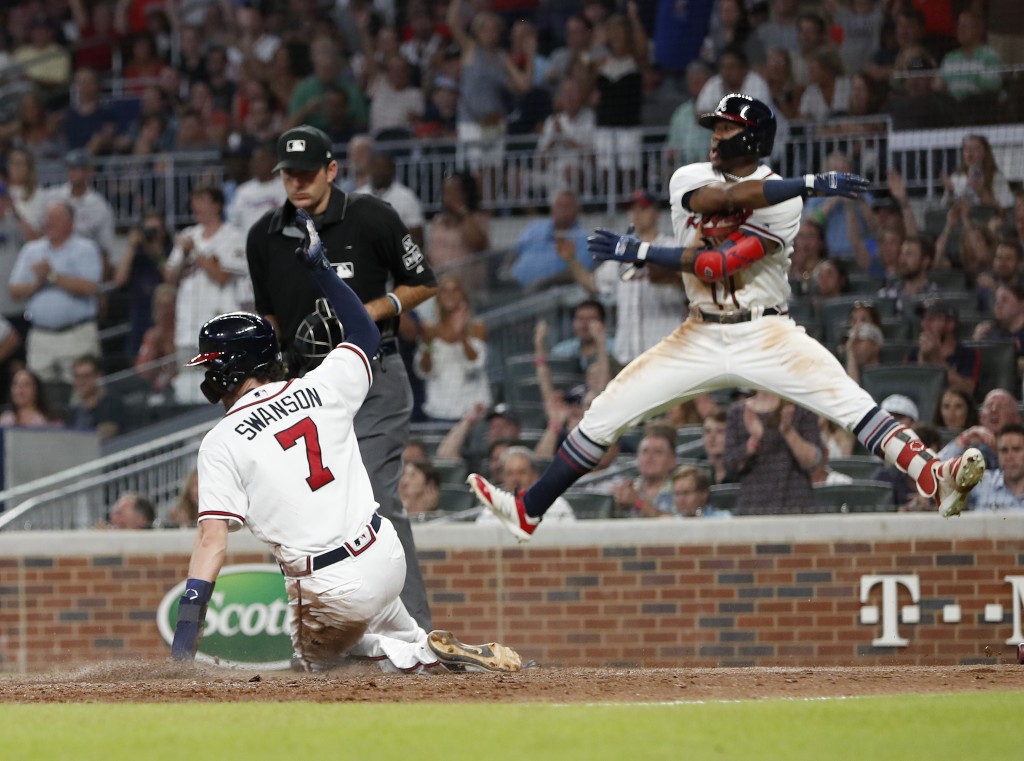 David Dahl homered in the third and capped the winning rally with a two-out, two-run single off Brad Brach (1-3). The Rockies took advantage of an error by shortstop Danby Swanson leading off the ninth to win for the fifth time in six games.

One night after being plunked in the left arm by Miami's Jose Urena, Acuna was back in the lineup looking to extend his homer streak to six games. Wearing a red protective guard, the 20-year-old slugger received a standing ovation his first time up and lined the second pitch — one more than he saw the previous game — into center field for a single, extending his hitting streak to nine games.

That was the highlight of his night. Acuna finished 1 for 4, lining out to right in the eighth in his last chance to become the first player in Braves franchise history to homer in six straight games.

Seunghwan Oh (5-3) earned the win and Wade Davis worked a scoreless ninth for his 33rd save.

ST. LOUIS (AP) — Bryce Harper had three hits and drove in three runs, and a beleaguered bullpen held on as Washington snapped a four-game losing streak.

The Nationals won for just the third time in their last 10 games and snapped the Cardinals' season-high, eight-game winning streak.

A bullpen that had blown two leads to start the losing streak took care of the rest. Justin Miller pitched two scoreless innings and Koda Glover earned the save in the first opportunity since Ryan Madson was placed on the disabled list on Tuesday.

Just two of the four runs Luke Weaver (6-11) allowed in his 3 2/3 innings were earned. He gave up seven hits, including two to Roark, who scored both times.

In the first game, Jose Bautista hit a grand slam and had a career-high seven RBIs as the Mets set a franchise record for runs, prompting the Phillies to use two position players to pitch the final three innings of a 24-4 rout.

The Mets kept on hitting in the nightcap with three straight doubles on Zach Eflin's first four pitches. Michael Conforto's two-run double made it 2-0.

But then Hoskins crushed one high off the foul pole to give the Phillies a 3-2 lead in the bottom half against Steven Matz (5-10), just activated from the disabled list. Hoskins, who went deep in both ends of the twinbill, has 11 of his 25 homers since the All-Star break — and three in the last four games.

PITTSBURGH (AP) — Jon Lester pitched six innings to win for the first time in just over a month and Ian Happ homered as Chicago beat Pittsburgh.

Lester (13-5) allowed five hits, struck out eight and had no walks while improving to 3-1 against the Pirates this season. His previous victory came July 15 at San Diego and he had gone 0-3 with a 10.32 ERA in five starts since the All-Star break.

Steve Cishek, Carl Edwards Jr. and Pedro Strop each pitched one inning to complete the six-hitter. Strop hit David Freese with a pitch with two outs in the ninth but converted his 10th save in 13 opportunities.

Happ connected with one out in the fourth inning off Ivan Nova (7-7) for his 13th home run, a drive deep into the right-center seats that was the game's only extra-base hit. There was a fair share of cheers while Happ rounded the bases as he is from suburban Mount Lebanon, Pennsylvania.

NEW YORK (AP) — Rookie left-hander Adam Kolarek pitched out of a bases-loaded, no-out jam in the ninth inning to lift Tampa Bay over New York to win its first series at Yankee Stadium since 2014.

Tampa Bay had lost 12 straight series in the Bronx, a record since the ballpark opened in 2009.

The Rays' bullpen mostly cruised following Blake Snell's five sharp innings until Sergio Romo allowed consecutive singles to Didi Gregorius and Gleyber Torres in the ninth — Torres' bloop ended his 0-for-17 skid. Romo walked Neil Walker on four pitches, then was replaced by Kolarek, a side-arming lefty who earned his first career save.

Tommy Pham helped the Rays jump on Masahiro Tanaka (9-3) with an RBI double during a two-run first inning, and Snell (14-5) and the bullpen took over from there.