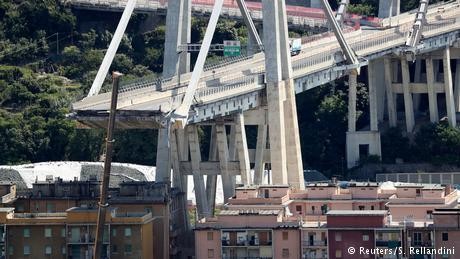 The Italian government on Thursday opened an investigation into the company responsible for the operation of a major bridge that collapsed in the city of Genoa, killing at least 38 people.

A section of the Morandi Bridge spanning about 100 meters fell through on Tuesday during lunchtime traffic, causing dozens of vehicles to drop some 50 meters.

The firm at the center of the crisis, Autostrade per l'Italia, is 90 percent owned by international motorway operator Atlantia.

Prosecutors have focused their investigation on possible design flaws or inadequate maintenance of the bridge that opened in 1967 but have not publicly identified a cause.

The Italian government said Autostrade per l'Italia could face a hefty fine or lose its concession over the incident.

Bridge due for repairs

A €20 million ($22.7 million) project to upgrade the bridge's safety had been approved before the collapse on Tuesday, with public bids to be submitted by September.

According to the business daily Il Sole 24 Ore, the improvement work involved two weight-bearing columns that support the bridge — including one that collapsed on Tuesday.

Read more: This is how engineers test concrete structures for strength

The Italian CNR civil engineering society also called for an ambitious plan to repair or replace tens of thousands of Italian bridges and viaducts built in the 1950s and 1960s, citing a number of collapses in recent years, not all fatal.

Factors that may have had the potential to contribute to the collapse of the Morandi Bridge include poor maintenance, design or wear and tear from weather and traffic that surpassed what the bridge was originally built to sustain.

The bridge was designed to be used for about 50 years but bridges can last longer than their given timeframe with adequate maintenance and repairs. The environment the bridge is in also plays a major role.

The CNR civil engineering society said structures as old as the Morandi Bridge had surpassed their lifespans.