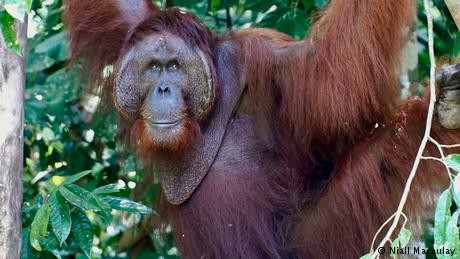 Warden Nor Emel Farnida Biniti Jaddil ranges through the Semenggoh Wildlife Center, surveying the treetops. Located in Sarawak, in Malaysian Borneo, this is one of just four orangutan rehabilitation centers in the world.

Jaddil picks up some fallen wild fruits that the orangutans like to eat. Then, seemingly out of nowhere, the park's famous alpha male orangutan — Ritchie (pictured above) — appears only meters away.

From a safe distance, she throws a pineapple and a coconut, and the ape reaches down to pick up the fruit.

Ritchie came to Semenggoh in 1989 as a youth of 30 kilograms (66 pounds), and now weighs around 140 kilograms (308 pounds). He was originally discovered in the Batang Ai area by author James Ritchie, up for sale, squeezed into an 18-inch square cage.

They rescued the orangutan and brought him to the wildlife center, where the ape bearing his name now lives peacefully.

Despite Ritchie's safety, the future of the species is by no means secure.

Keeping orangutans safe for the world

The Bornean orangutan (Pongo pygmaeus) is critically endangered, with its population in decline due to habitat destruction and illegal hunting.

And though you don't often hear good news about orangutans, there are places dedicated to their preservation.

"It's not just important for Borneo, but for the whole world," said Jaddil of the preserve. "We are keeping these beautiful apes, and creating a safe place for them to move here in the forest."

The heartbreaking viral video of an orangutan defending its territory from loggers, by trying to challenge their earthmover, recently brought worldwide attention to their plight.

Located in one of the oldest forest reserves in Sarawak just 24 kilometers (15 miles) from the Malaysian capital Kuching, the Semenggoh Wildlife Center (established in 1975) cares for animals kept illegally as pets, orphaned, or found injured in the rainforest.

Over the years, numerous orangutans have been successfully rehabilitated and released into the 653-hectare (1,600-acre) reserve. Also the offspring of such "graduates" have prospered, roaming wild at Semenggoh.

The center educates local people about the orangutan's importance — as well as drawing in excited tourists. The rehabilitation part of the program has recently transferred to Matang Wildlife Centre in the Kubah National Park, allowing Semenggoh to concentrate solely on studying the biology and behavior of these great apes.

At a regular feeding time, the ranger briefs more than 100 tourists to be especially quiet, and avoid stressing the animals.

The orangutans here spend most of their time in the forest seeking out their favorite fruits. Though they are fearful of humans, some return to the platforms of the feeding station for supplemental food.

"If people are able to have the image of this wild animal living in the wild setting, I believe we can touch their hearts," said Jaddil. "They will also become our assistants to protect other parts of nature, the forest, and other animals as well."

The family of great apes includes orangutans, gorillas, chimpanzees — and humans. As such, orangutans share nearly 97 percent of their DNA sequence with us.

Yet humans are the only great ape that is not threatened with extinction.

With a mere 30 orangutans living at Semenggoh, the forest reserve is close to capacity; yet some believe the work undertaken there is vital to their future survival.

The next step of the conservation program is to link the Semenggoh reserve with 8,000 hectares of nearby protected forest.

But that's not enough, says Oswald Braken Tisen, general manager of the Sarawak Forestry Corporation, which was established by the Malaysian government to carry forward sustainable forest management.

"The bigger picture of connectivity in Sarawak or in Borneo is called the Heart of Borneo initiative," Tisen explained.

The Heart of Borneo is a conservation plan initiated by WWF to protect the largest rainforest left standing in Southeast Asia, covering 220,000 square kilometers in central Borneo (or 85,000 square miles — an area equivalent to Great Britain).

Read more: The world is losing vital forests quicker than ever

The conservation effort, supported by the Sarawak state government and spanning the countries of Brunei, Indonesia and Malaysia, is even getting bigger.

"Our Heart of Borneo will be expanded to the very tip of Sarawak — now we are looking at more than 2 million hectares of land in Sarawak territory," Tisen said.

That would give the animals room to roam, a larger breeding pool and better access to seasonal foods. Even some areas allocated for logging are becoming part of the conservation area, tied together by connecting corridors — good news for the survival of orangutans.

But orangutans and humans living side-by-side has plenty of challenges. "Society has been there for a long time," says Tisen of the land planned for preservation.

"The only way that we will be able to allow animals like orangutans to pass through is through an awareness program where people appreciate them."

Tourism has boosted the local economy, and is a big motivator. Community-based tourism around other wildlife, such as crocodiles, has already been established.

"I do believe that since orangutans are a much more attractive species, we might get the community to be the drivers to protect them themselves," Tisen said.

In that sense, the orangutans' future survival is likely to be driven by the public.