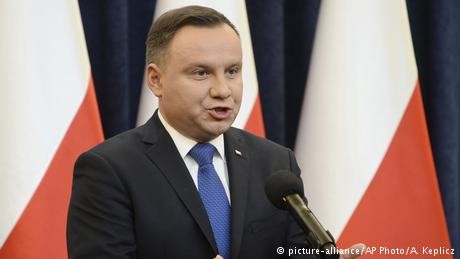 Polish President Andrzej Duda on Thursday said he would not sign a law put forward by the ruling Law and Justice (PiS) party that would have effectively meant that no small party in Poland would have a chance at European Parliament elections next year.

"I've decided to veto this bill. This change would mean that the effective electoral threshold would rise to as much as 16.5 percent from 5 percent," Duda said on public television.

"This means that only two parties would have a real chance of winning representation in the European Parliament," Duda added.

Duda himself, a PiS ally, may have to rely on the support of smaller parties to be re-elected in 2020 polls.

Read more:Polish Senate speaker: We are not anti-Europe

The proposed law would likely have exacerbated concerns in the European Commission that Poland's right-wing government is undercutting democracy in the country.

On Tuesday, the Commission increased pressure on Warsaw over a law that would force the early retirement of more than a third of Supreme Court judges. The EU sees the legislation as another step toward the PiS party bringing Poland's entire court system under its control.

The Commission said it could open a case at the EU's highest court in a month.

In December, in an unprecedented move, Brussels launched Article 7 proceedings against Poland over "systemic threats" to the rule of law, which could eventually see Warsaw having its voting rights suspended.