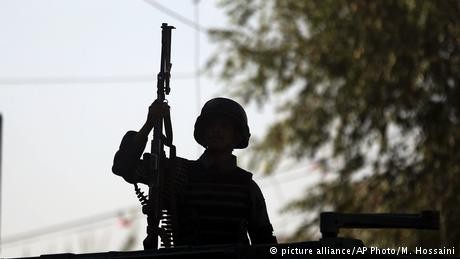 Gunmen on Thursday launched an attack on an intelligence training facility in the Afghan capital of Kabul, officials said.

"Clashes are ongoing and the area is cordoned off by the Afghan security forces," said Kabul police spokesman Hashmat Stanikzai.

Read more: Are Taliban and Kabul teaming up against 'Islamic State'?

The Afghan capital has been inundated by a wave of attacks, with dozens of students killed on Wednesday when a suicide bomber detonated explosives strapped to his body inside an education center, claiming at least 37 lives. Many of the casualties were students between ages of 16 and 18.

Afghan President Ashraf Ghani condemned the "terrorist" attack on the center in a predominantly Shiite neighborhood, saying it "martyred and wounded the innocent." The "Islamic State" militant group on Thursday claimed responsibility for the attack.

Kabul has been targeted by at least 16 attacks since January. The attacks have left more than 240 people dead.

According to the UN Assistance Mission in Afghanistan, 363 children were killed and nearly 1,000 others injured across the country during the first half of the year. In 2017, more than 10,000 civilian were killed or injured.