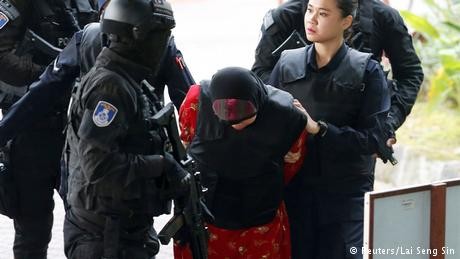 A court in Malaysia ruled that there was enough evidence against the women suspected of killing Kim Jong Nam, the brother of North Korea's dictator, Kim Jong Un, to warrant continuation of the trial on Thursday. Previously, the court heard arguments from the prosecutors and dozens of prosecution's witnesses on the women's role in the apparent assassination at the Kuala Lumpur airport in February 2017.

Under Malaysian law, the judge has the right to throw out the case after the prosecutors present their arguments. On Thursday, however, the judge ordered for the trial to continue and for the lawyers of the accused to present their side of the case.

According to the judge, the prosecutors presented evidence to infer a "well-planned conspiracy" to set up a "political assassination."

The women, Indonesian Siti Aisyah and Vietnamese Doan Thi Huong, admit to being at the scene and approaching Kim Jong Nam, but claim they were told they were taking part in a candid camera prank. According to their attorneys, they were duped by a group of four North Koreans with suspected links to Pyongyang's embassy in Malaysia. The North Koreans have already fled the country.

Read more: Who's who in the Kim Jong Nam murder trial?

On Thursday, however, judge Azmi Ariffin said the killing was "no prank." If convicted, the pair could face the death penalty and be executed by hanging. North Korea has denied involvement in the case.