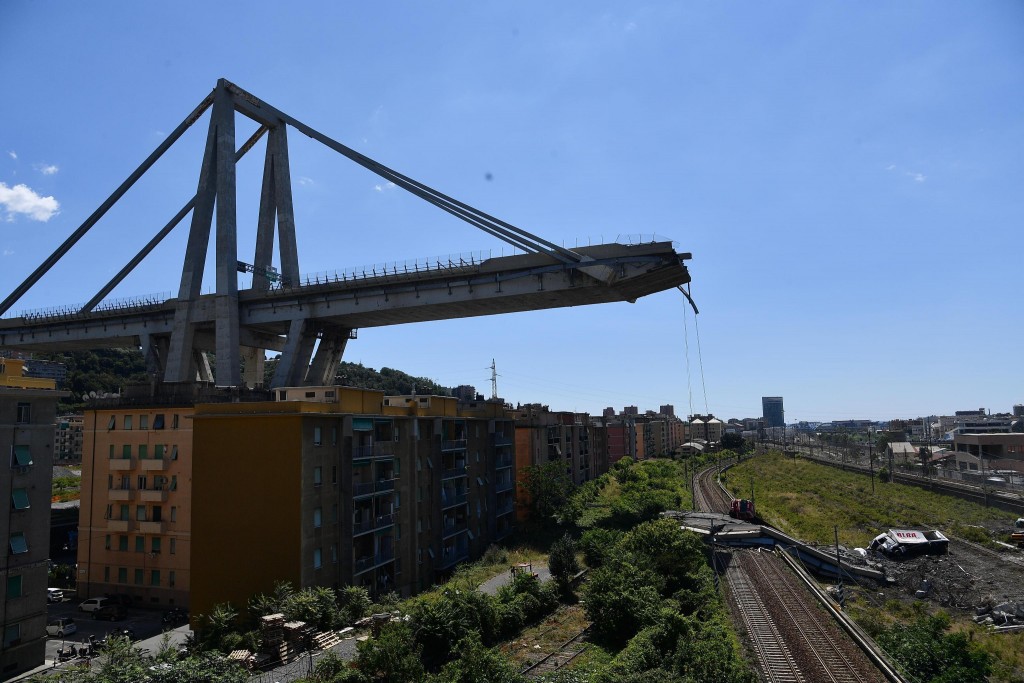 NEW YORK (AP) — The bridge that collapsed in the Italian port city of Genoa was considered a feat of engineering innovation when it was built five decades ago, but it came to require constant maintenance over the years. Its design is now being investigated as a possible contributor to its stunning collapse.

The Morandi Bridge was severed in its midsection during a heavy downpour Tuesday, killing at least 39 people. Italian prosecutors focused their investigation into possible design flaws or inadequate maintenance of the 1967 bridge.

Engineering experts said the disaster points to the challenges of maintaining any aging bridge, regardless of its design.

"What the general public does not comprehend is that bridges have been traditionally designed in the past for a life span of 50 years," said Neil Hawkins, a professor emeritus of engineering at the University of Illinois, who specializes in reinforced and prestressed concrete design. "The environment in which the bridge exists can have a major effect on how much it can last beyond that 50-year design life span."

The structure is a cable stayed bridge designed by Italian engineer Riccardo Morandi, who died in 1989. Among its unusual features were its concrete-encased stay cables, which Morandi used in several of his bridge designs instead of the more common steel cables. There are two similar bridges in the world, in Libya and Venezuela.

Experts have said a number of factors could have contributed to the collapse, including wear and tear from weather and traffic that surpassed what the bridge was originally built to sustain.

"Genoa is a port city so that there can be marine effects and also it is a major industrial center so that there can be air pollution that impairs the concrete," Hawkins said in an e-mail. "Whether any of these effects, or other major deficiencies in the foundations, were present I have no knowledge. But all can contribute to a bridge failure."

Antonio Brencich, a professor of construction at the University of Genoa, said the design lent itself to swift corrosion and the bridge was in constant need of maintenance.

Most recently, a 20 million-euro ($22.7 million) project to upgrade the bridge's safety had been approved before its collapse, with public bids to be submitted by September. According to the business daily Il Sole 24 Ore, the improvement work involved two weight-bearing columns that support the bridge — including one that collapsed Tuesday.

But Brencich, who warned two years ago that the design of the bridge was a failure, said the structure should have been destroyed rather than be subjected to more repairs.

The Genoa bridge, along with the two similar bridges in Libya and Venezuela, have deteriorated at "unimaginable speeds," Brencich told Sky News Italian television station Wednesday. "Since this bridge was under constant maintenance, the time had come to consider a replacement for the bridge."

The Italian CNR civil engineering society said structures as old as the Morandi Bridge had surpassed their lifespans. It called for an ambitious plan to repair or replace tens of thousands of Italian bridges and viaducts built in the 1950s and 1960s, citing a series of collapses in recent years, not all fatal.

The collapse of a freeway bridge in Minneapolis in 2007 drew similar alarm bells about aging infrastructure in the U.S.

The Interstate 35W bridge, whose collapse into the Mississippi river killed 13 people, was also built in the 1960s, though federal investigators ultimately concluded that poor maintenance wasn't the main cause of the disaster. Instead, they pointed to a design defect, saying crucial gusset plates that held the beams together were only half as thick as they should have been.

Since then, there has been a push to improve bridge designs and make changes to the way they are inspected.

A more recent fatal collapse involved a newly constructed pedestrian bridge in Florida. U.S. investigators have said they are looking at the emergence of cracks in the structure before the collapse of the bridge near Florida International University, which killed six people.

Matteo Pozzi, an associate professor in the Department of Civil and Environmental Engineering at Carnegie Mellon University, said the bridge in Italy "was known to have problems," as evidenced by the upcoming upgrades. But he said older bridges can often be sustained with maintenance and repairs — and collapses are rare.

"It's still a challenge to predict exactly when, or if, a bridge will collapse," Pozzi said. "Overall, we are doing a good job because a failure of this kind is rare. But we are trying to improve the ways in which we understand and monitor these bridges."

Of the bridge's design, Hawkins said the concrete encasement improves the anchorage of the cables but "in a marine environment there can be a build-up of chloride in the concrete and that can lead to cable corrosion." He said any broken cables would have to be examined to determine whether that was the case in the Morandi bridge.

The bridge in Venezuela, which is much larger and spans Lake Maracaibo, also has had mishaps. In 1979, corrosion caused the rupture of one of the concrete-encased cables, forcing a complicated effort to replace it.

Pozzi said use of concrete-encased cables for bridges was considered a "pioneering technique" at the time but it was never widely adopted and came to be considered problematic.

However, he said there are many bridges around the world whose original technology has been abandoned, and he cautioned against concluding that any are in danger of collapse.

More often, it means "there is a maintenance cost," he said. "The question is for how long and in what way."