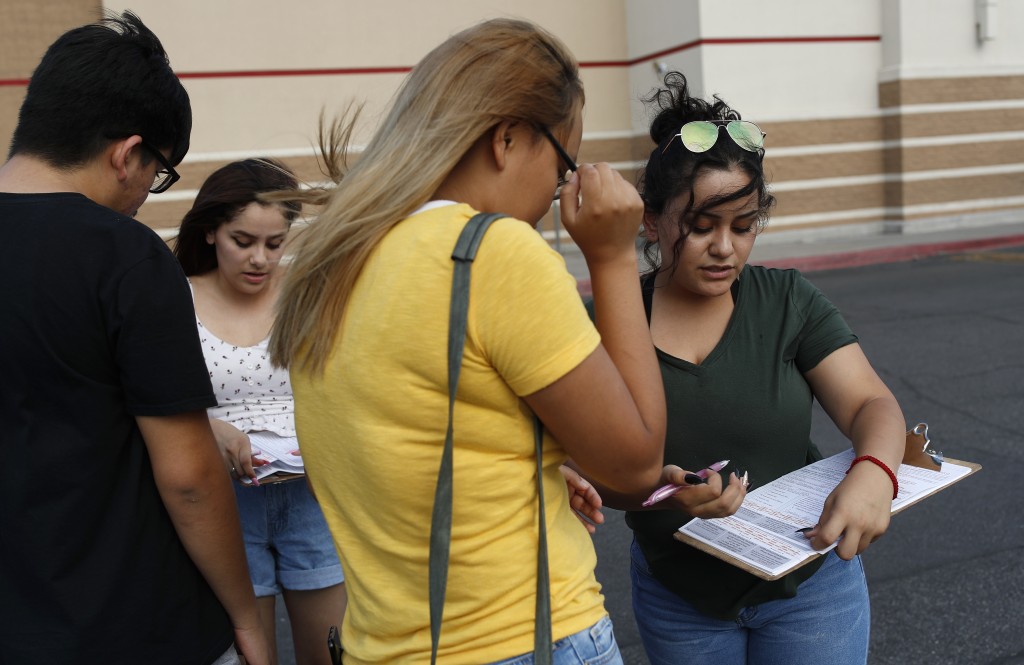 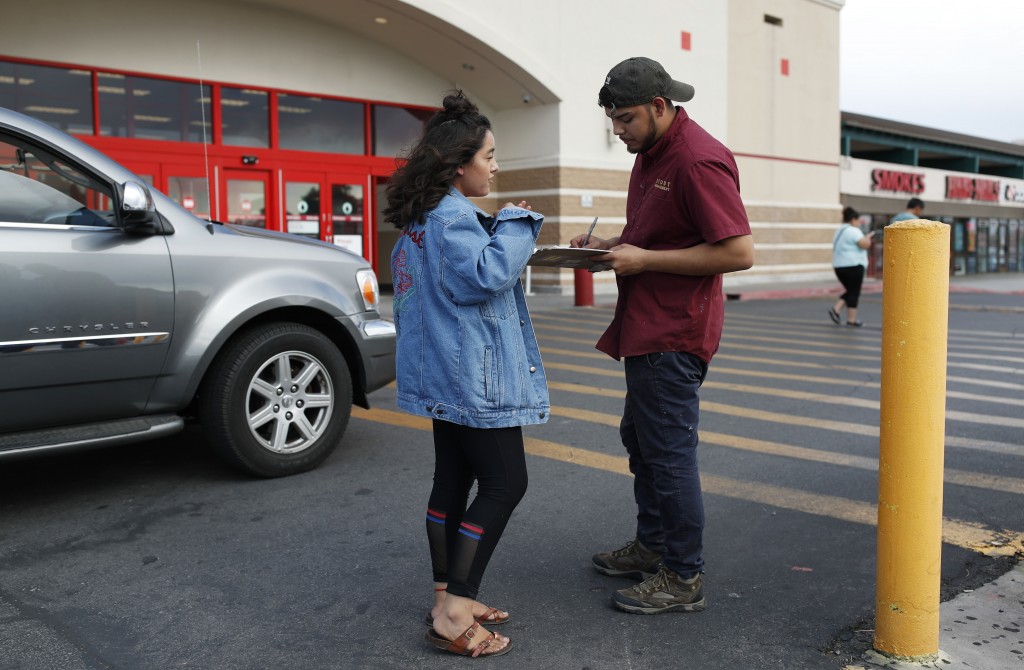 LAS VEGAS (AP) — As temperatures topped 110 degrees last week outside a Latin American grocery store in Las Vegas, 19-year-old Diara Hernandez bounded up to customers, greeting them with a smile and a clipboard to ask in Spanish if they're registered to vote — or can vote.

Hernandez, a College of Southern Nevada political science student and aspiring immigration lawyer, is part of the Democratic Party's battalion of volunteers working to register and engage Latino voters in this year's midterms. Democrats hope to re-create the big wins the state's Hispanic and immigrant community are credited with delivering for the party two years ago.

Backlash against President Donald Trump's tougher immigration policies may help Democrats, but the party is also running into headwinds as they try to engage communities facing fear and uncertainty.

Silva, a 30-year-old woman in Las Vegas who was brought to the U.S. without authorization at age 4, said that while she feels energized by the prospects of a "blue wave" in November, many in her community are grappling with deportations from routine check-ins with U.S. Immigration and Customs Enforcement and the uncertain future of DACA.

At a Las Vegas kickoff of a Democratic Latina organizing initiative called "¡Mujeres Mobilized!," Silva said she's heard many people say they won't vote because they don't think it will make a difference.

"Our political power is there, I just think it's buried under a lot of fear, a lot of frustration and also a lot of misinformation," she later told The Associated Press.

Kate Marshall, the Democratic nominee for lieutenant governor whose family came to the U.S. from Mexico in 1921, said in the Latino community, Democrats "must spend some time talking to people about how our government is legitimate and worthwhile and needs your participation."

Twenty-nine percent of people in Nevada are Latino and turning them out to vote makes a big difference in this swing state.

In 2014, lagging Hispanic turnout in the midterm election was cited as one reason Republicans won key victories across the state. Two years later, heavy organizing among Latinos and immigrant-dominated labor unions was credited with delivering Nevada to Hillary Clinton, along with helping Democrats keep a U.S. Senate seat, flip two U.S. House seats and take control of both state legislative houses.

Christina Lopez, a state Democratic Party organizer, said her goal is to "destroy the narrative" that communities of color fail to turn out for midterm elections.

"We're here to prove that communities of color swing them," Lopez said.

Republicans, too, are making concentrated efforts to reach out to Hispanics. The state and national party's strategic initiatives have included meetings with community leaders, political operative trainings in Spanish and relationships with groups like the Latin Chamber of Commerce and Republican National Hispanic Assembly.

Slider, who is of Cuban heritage and a cousin of Florida Republican Sen. Marco Rubio, said she reminds people that families like hers left socialist and communist countries - such as Cuba and Venezuela - for the United States.

"They've been told that they're Democrats," she said. "But when you talk to them about the issues, they realize they're actually conservatives."

Still, the president's harsh rhetoric, policies and racially-tinged comments remain a roadblock for some Latinos who would otherwise vote Republican.

"I'm thinking about maybe changing my vote," he said. "Republicans are a little more straight about that."

But Silva said despite considering a vote for GOP candidates, he won't support the party's leader.

"Oh no, I'm Latino. I'd never vote for Trump," Silva said. "I think a lot of things Trump is doing is right. But he's a racist guy."

Erik Baltazar, a 21-year-old who moved to Las Vegas a few months ago from Mexico, said he can appreciate Trump trying to crack down on illegal immigration, but the president "has the worst approach ever."

Baltazar, a U.S. citizen born in Phoenix, cited the Trump administration's separation of families and children being held in cages at border facilities, saying "I think it's not human to do that stuff."

If he doesn't hear a message of compassion or tolerance, Baltazar said he's not planning to vote at all.