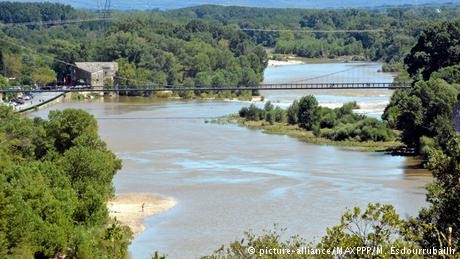 The German caretaker's body had been found in the Ardeche River near the Saint-Julien-de-Peyrolas campsite on Monday and his identity was confirmed on Wednesday. An autopsy is to be held on Thursday.

Campers, including a group of German children, on the riverside land in the southern Gard region near Avignon had been surprised by the storm and flash floods last Thursday.

The 136 children and 48 adults were evacuated by French rescue teams and taken to a shelter before returning home to Leverkusen. Nine of the campers had been slightly injured. Only the 66-year-old caretaker was reported missing after his caravan was swept away in the flood.

The president and vice president of the Leverkusen club, Jugendförderung Saint-Antonius, which owned the land and organized the campsite are under investigation for "involuntary injury, aggravated by the placing of others in danger."

Previous brush with the law

The mayor's office in Saint-Julien-de-Peyrolas had tried to have the campsite removed last year but the Leverkusen association had successfully argued in court that it respected the rules that applied to holiday camps and everything had been done for the children in terms of hygiene and provision of food.

The mayor's office had appealed, claiming the court had not taken into account questions concerning a construction permit for the campsite in a zone subject to flooding. The appeal is to be heard in September in Nimes.