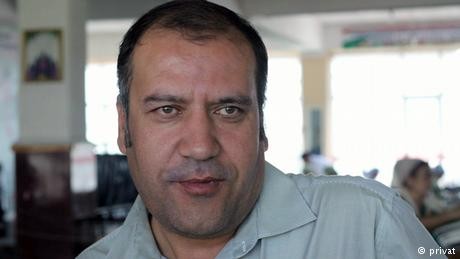 Journalist and comedian Khayrullo Mirsaidov was found guilty last month of embezzlement, misuse of state funds and false reporting to police. A court in northern Tajikistan sentenced him to 12 years in prison and fined 12,000 euros ($13,600) for alleged damages against the state. Now he is fighting that verdict. The court will hear his appeal on August 22.

In addition to his work in journalism, Mirsaidov is famous for managing his country's satirical comedy troupe on the well-known Russian TV show KVN. In the show, teams compete by giving funny, quick answers to questions. Most contestants represent their city, region or country, which supports them financially. In return, the teams promote where they are from.

Friends and colleagues rush to help

The case against Mirsaidov began last year, when a problem he had with the local authorities went public. In a letter to President Emomali Rahmon, Mirsaidov accused officials of demanding bribes and misusing public funds set aside for his KVN team. These accusations were not investigated; instead, Mirsaidov was arrested. Independent observers, human rights activists and colleagues are convinced that the entire affair has been created to silence Mirsaidov.

Danish journalist Michael Andersen, who is a friend of Mirsaidov's, called the imprisonment "shocking." Andersen told DW that he launched the social media campaign #FreeKhayrullo "with Mirsaidov's friends and colleagues" as soon as the verdict was announced, noting the courage it takes to live in Tajikistan and publicly support Mirsaidov.

Hundreds of people around the world have used Twitter to call for his release. Andersen sees this as a heartening part of the campaign's all-important goal of giving Mirsaidov's family a sense of support. Meanwhile, Mirsaidov's supporters have paid the court-ordered fine, though his family said that doing so does not mean they recognize his guilt.

In a joint statement, diplomats and international organizations such as Reporters Without Borders, Human Rights Watch, the National Association of Independent Media of Tajikistan and the Norwegian Helsinki Committee have called for Mirsaidov's immediate and unconditional release.

The Office of the United Nations High Commissioner for Human Rights has also criticized the verdict. "The conviction of Mirsaidov signals that the authorities are cracking down on reporting of corruption, rather than on corruption itself," the office said. The Organization for Security and Co-operation in Europe (OSCE) has also called for the journalist's release, telling DW they are monitoring the situation. Germany's Federal Commissioner for Human Rights Policy and Humanitarian Aid, Bärbel Kofler, has urged that the verdict be reviewed.

Mirsaidov, who worked as a freelance correspondent for DW until 2012, also has the support of DW's editor-in-chief, Ines Pohl, who has joined the call for his release. Additional Western embassies, including that of the United States as well as the European Union's delegation to Tajikistan, have spoken up for Mirsaidov.

Andersen credits his #FreeKhayrullo campaign for compelling Western governments to speak out publicly against President Rahmon. Nonetheless, he is still calling for more support, including from the OSCE. The West cannot praise democracy and free speech in Tajikistan, he said, while leaving locals to their fate for defending the principles of Western democracy.