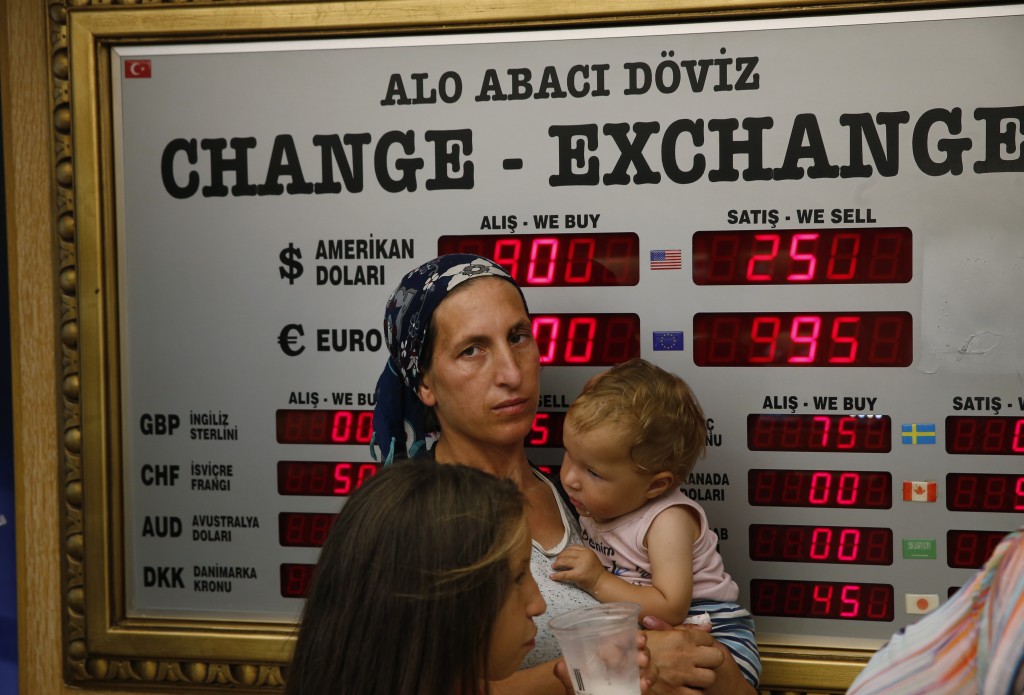 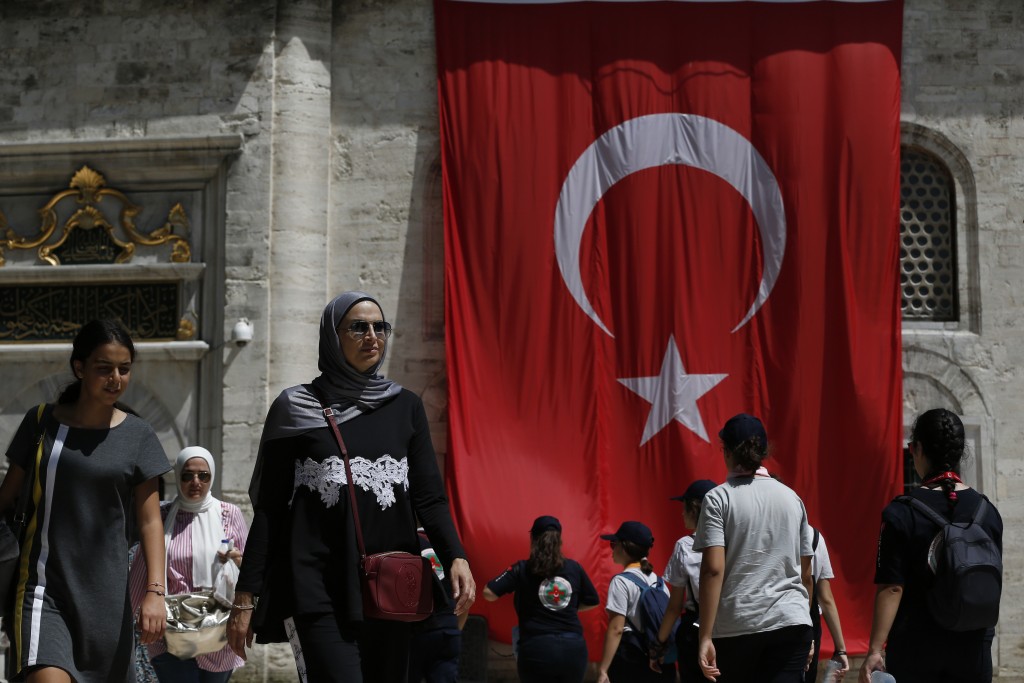 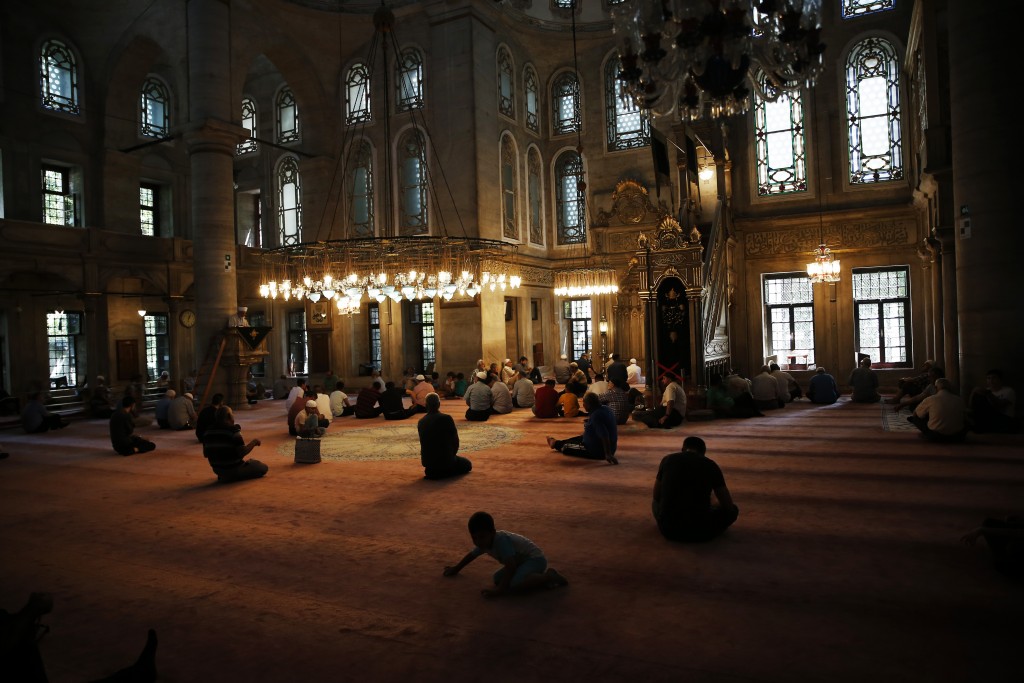 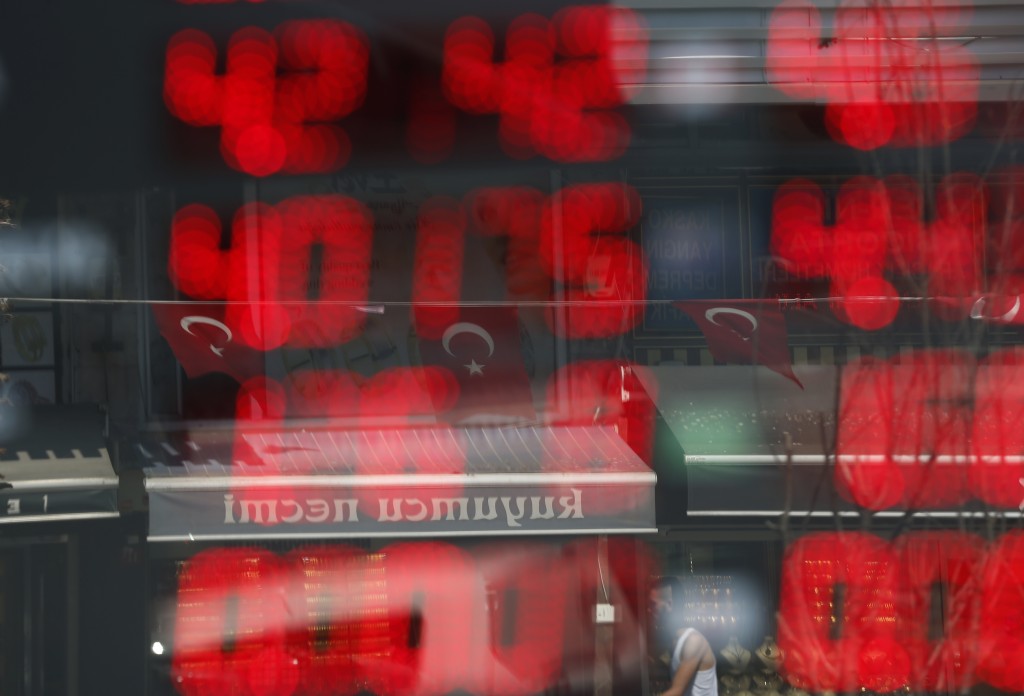 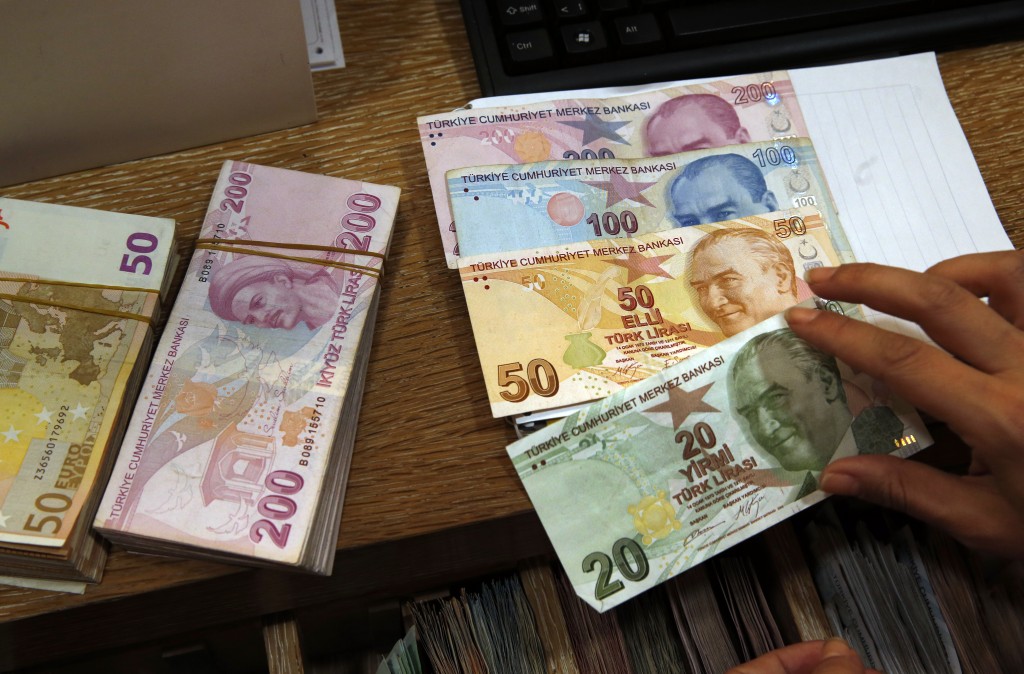 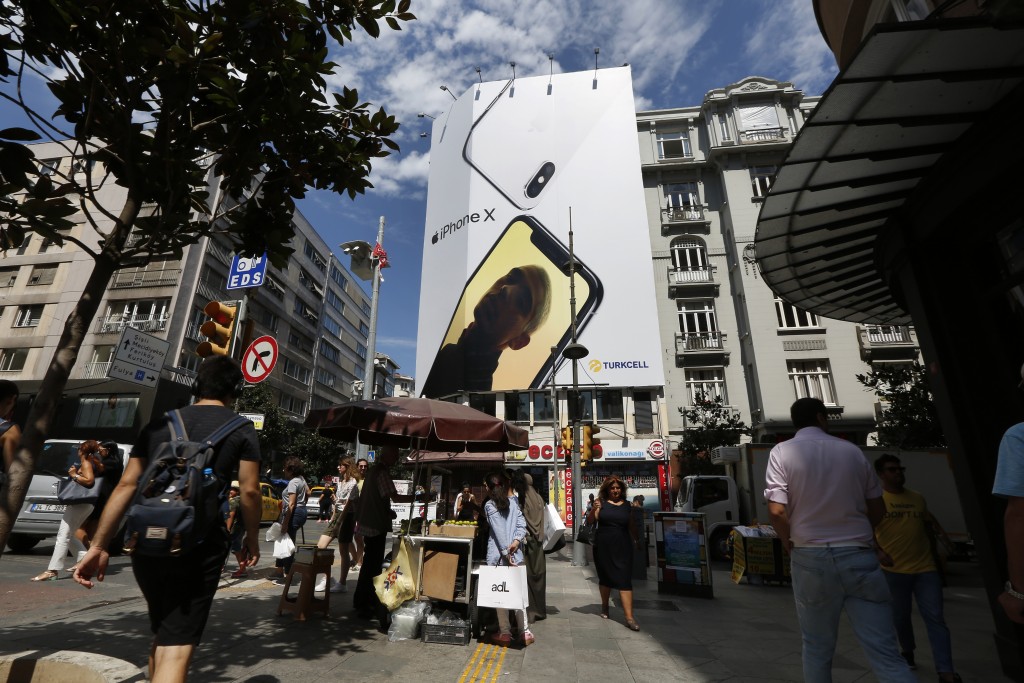 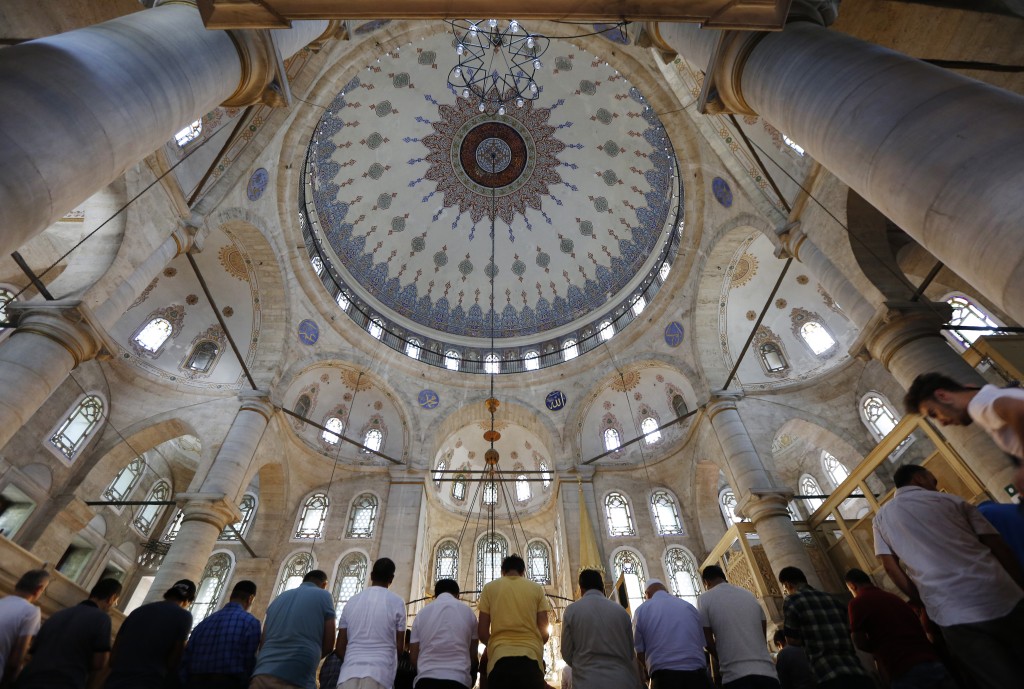 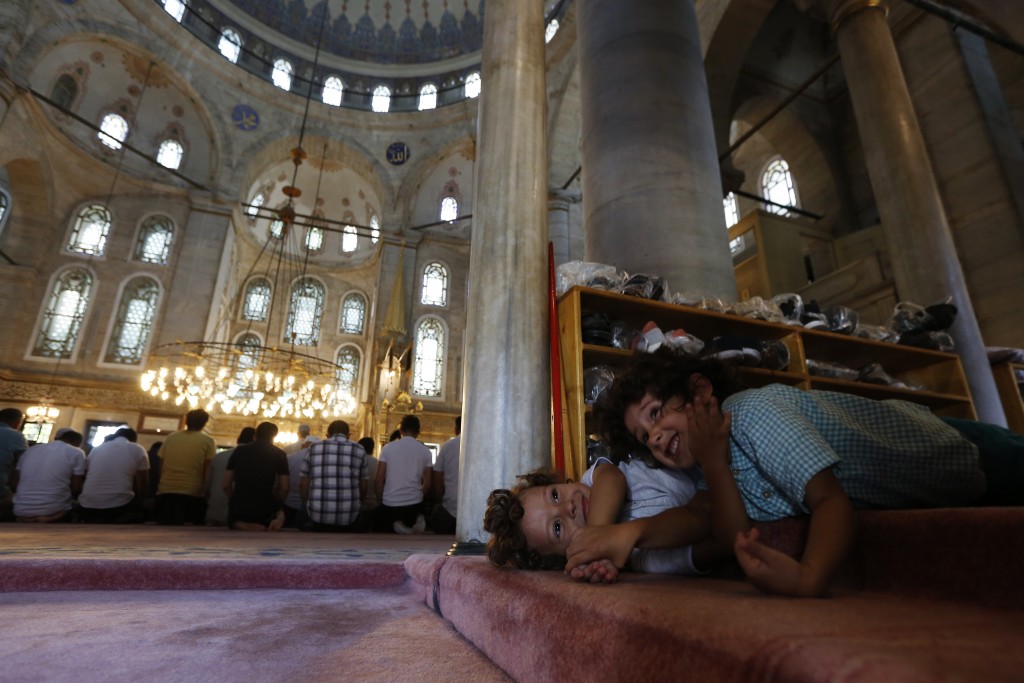 ISTANBUL (AP) — Some Turks are reacting with defiance to their plunging currency and an escalating trade and political dispute with the United States — an indication that they are ready to endure economic pain and risk further deterioration in a key, yet troubled alliance dating from the Cold War.

"We don't like those who don't like us," said Rifat Tepe, an electronic goods seller in Istanbul who said he will heed a call by President Recep Tayyip Erdogan to stop selling American electronic products.

Analysts question the effectiveness of any Turkish boycott of U.S. goods and view Turkey's tit-for-tat taxes — imposed Wednesday on American exports, including cars, tobacco and alcohol — as mostly symbolic because they have relatively little value to a global trade giant engaged in similar disputes with China and other major economies. But the Turkish government's framing of its problems as an epic battle for sovereignty against outside enemies, particularly U.S. President Donald Trump, resonates among core supporters, even as fears grow that further falls of the Turkish lira could threaten bankruptcies among Turkish firms carrying high foreign currency debt.

While Turks who propelled Erdogan to election victory in June recognize they could face hardship, there is little domestic criticism of a leader who presided over years of debt-fueled growth that drew warnings of a looming bust and currency crisis. Turkey is deeply divided between Erdogan's pious Muslim base and secular Turks who once held sway over the country, but opposition voices have been mostly muted as Erdogan, who has concentrated power in a new presidential system of government, projects an image of a righteous state under siege.

"I think we should always use locally made products," said Gurcan Ulusum, another Istanbul electronics goods shop owner. "After the spike of the U.S. dollar, prices of foreign products have increased dramatically and the consumer has no purchasing power."

Haydar Tastan, an Istanbul resident shopping for a cell phone, said a boycott of American goods could be a "great thing" but he wished there were alternatives.

"I'm not looking for a new product anyway," he said. "I'm looking for something that's secondhand."

Cevdet Erdol, president of the Health Sciences University in Istanbul, urged Turks to boycott U.S. tobacco products and "to stop smoking altogether," according to Turkey's state-run Anadolu news agency. It said the southeastern Turkish city of Gaziantep has halted imports of American brands and products.

Many economic crises in emerging market countries like Turkey follow periods of domestic support for governments that focus on electoral gains and avoid unpopular economic reforms, and pressure on the Turkish lira is likely to persist if Turkish authorities shun decisive action, said Nafez Zouk, an analyst at Oxford Economics. Possible measures include an interest rate hike, capital controls, a reduction in spending and an easing of tensions between Turkey and the United States, which are NATO allies, he said.

The lira, which has lost about 40 percent of its value this year, recovered a little on Wednesday after the Turkish government took steps to support it.

Still, analysts expect the currency crisis to persist or even worsen, and the feud with the United States simmered as a Turkish court rejected an appeal for the release of Andrew Brunson, an American pastor being tried in Turkey on espionage and terrorism-related charges. Washington has imposed financial sanctions on two Turkish ministers and doubled steel and aluminum tariffs on Turkey as the Trump administration tries to secure the release of Brunson, who it says was framed.

The long relationship between Turkey and the United States was always "high maintenance" and often in "crisis management mode," said Ozgur Unluhisarcikli, director of the office of the German Marshall Fund in Ankara, the Turkish capital. Now, he said, the alliance between the two is "very vulnerable" because they have conflicting interests as well as different priorities, including in the Syrian war and over relations with Russia.

"It's not only one problem," he said. "Pastor Brunson is perhaps the tip of the iceberg."

One Ankara resident, Aydin Cavus, said consumer prices are "normal right now" while another shopper said inflation was hitting hard, reflecting mixed impressions about the looming impact of Turkey's financial challenges. Bar owner Burhan Coban said consumer and distributor prices for American whiskey are the same, for now, despite the currency plunges and the new Turkish tariffs. But, he said, a 20 percent or 30 percent increase would force him to take bourbon off the menu.

Some Turks have taken to selling their gold for extra cash as the crisis starts to bite.

"Everyone has taken out the gold they've been hiding under their pillows," said jewelry shop owner Tuncay Lus. "The customer isn't buying anything right now. They're just selling. We don't have enough money" to buy all the gold.

Associated Press writers Yagmur Cengiz in Istanbul, and Eren Guvendik and Suzan Fraser in Ankara, Turkey, contributed to this report.