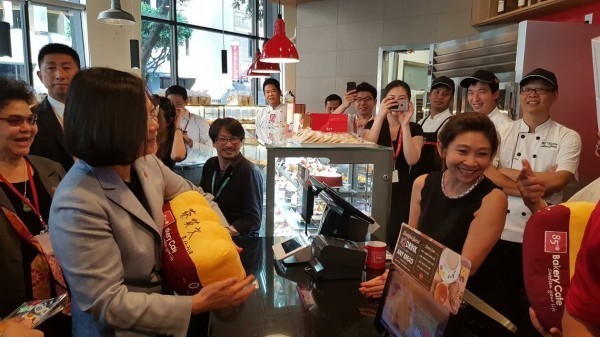 Tsai visited a 85C café to buy a coffee and interact with staff, at the Taiwanese-run international coffee chain. During the visit, Tsai autographed a pillow for one of the staff members, sparking outrage and great leaps in logic by Chinese netizens and government.

Tsai is currently on a state visit to Latin America allies Paraguay and Belize, where she will attend the inauguration ceremony of Paraguay's President-elect Mario Abdo Benítez on August 15. Tsai made a brief stop-over in Los Angeles, where she met with U.S. officials, visited a high school, and gave a speech.

China's state-run media was upset with Tsai's visit to 85C, assuming the visit and pillow signing was part of a corporate strategy and political statement by the private business, saying it was annoyed that the private company would give Tsai a "big gift package." 85C has since proven this assumption wrong, stating that an employee asked Tsai to sign the pillow in a personal capacity, and the ordeal had nothing to do with the company, reported the Liberty Times.

Lu Chiang (鹿強), head of the Chinese American Federation went a step further, saying "85C has many branches in China. We would like to ask 85C to explain why they do this? I think if they want to operate in China on the one hand, and support Taiwanese independence on the other… this is unacceptable and they should be cast aside," reported CNA.

It is unclear how a brief visit to a café by Tsai can be construed as clear and demonstrable support for Taiwanese independence by 85C.

Chinese netizens continued with the harassment of 85C, with many threatening to boycott the shop and posted their discontent on 85C's official Weibo social media webpage.

This harassment from the Chinese government and netizens led 85C to go on the defensive and kowtow to Beijing's world view. 85C swiftly published a statement on their Weibo webpage apologizing and voicing support for the Communist Party of China.

85C meekly said in a statement that the company "firmly supports the 1992 consensus," as well as "opposes any behavior or remarks that divide the feelings" between China and Taiwan. 85C vowed to "uphold the cross-strait family" to service the people of both China and Taiwan.

In addition, 85C praised various Chinese government departments for their help in supporting 85C in China, despite being corralled by the Chinese government to backtrack on something which may well have been outside of its control.

Taiwan Presidential Office Spokesman, Alex Huang (黄重谚) said on August 15 that any imposition of ideology on international business is a manifestation of a non-civilized society. Huang added that the Taiwan government condemns such action against the rule of law and freedom of speech.

CNA reported that despite all the upset Chinese netizens posting on the internet, 85C cafes in Beijing were as busy as normal and no effects of the ordeal were evident.