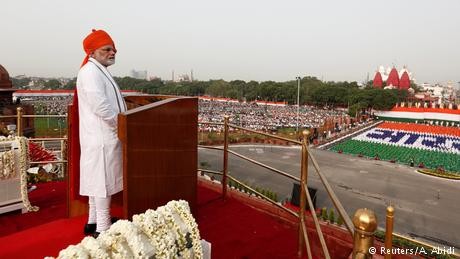 In a wide ranging 80-minute speech from New Delhi's Red Fort, Modi outlined his conservative government's achievements and ambitions ahead of a general election early next year in which he is seeking another five-year term.

Read more: The unlit side of India's rural electrification

"India has always advanced in space science but we have decided that by 2022 when India completes 75 years of independence, or even before that, a son or daughter of India will go to space with a national flag in their hands," he said.

A successful manned flight would make India only the fourth country to send a human into space after Russia, the United States and China. In 1984, Rakesh Sharma became the first Indian to reach space, but that flight was aboard a Soviet rocket.

India has had a space program since the 1960s and sent scores of satellites into space. It has also conducted an orbiter mission to Mars and the moon. The world's sixth-largest economy seeks to use its space program to leverage technological advancements to solve problems at home.

Modi also said the government would launch a health insurance scheme in September that would benefit 500 million poor people.

He also touted the government's economic progress and fight against corruption and poverty.