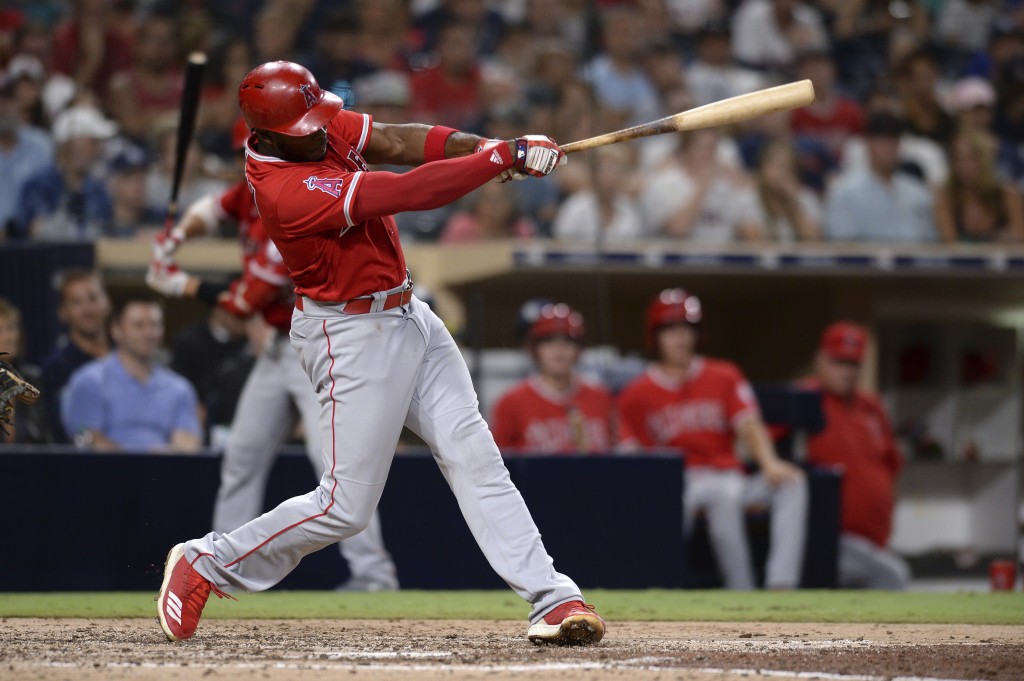 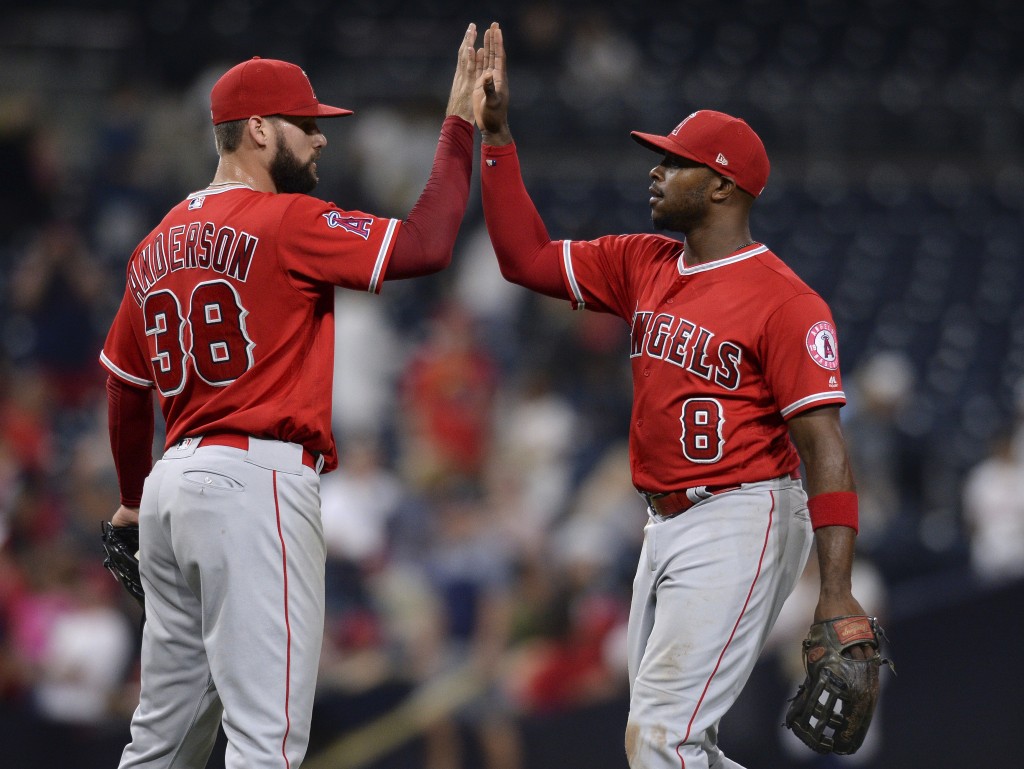 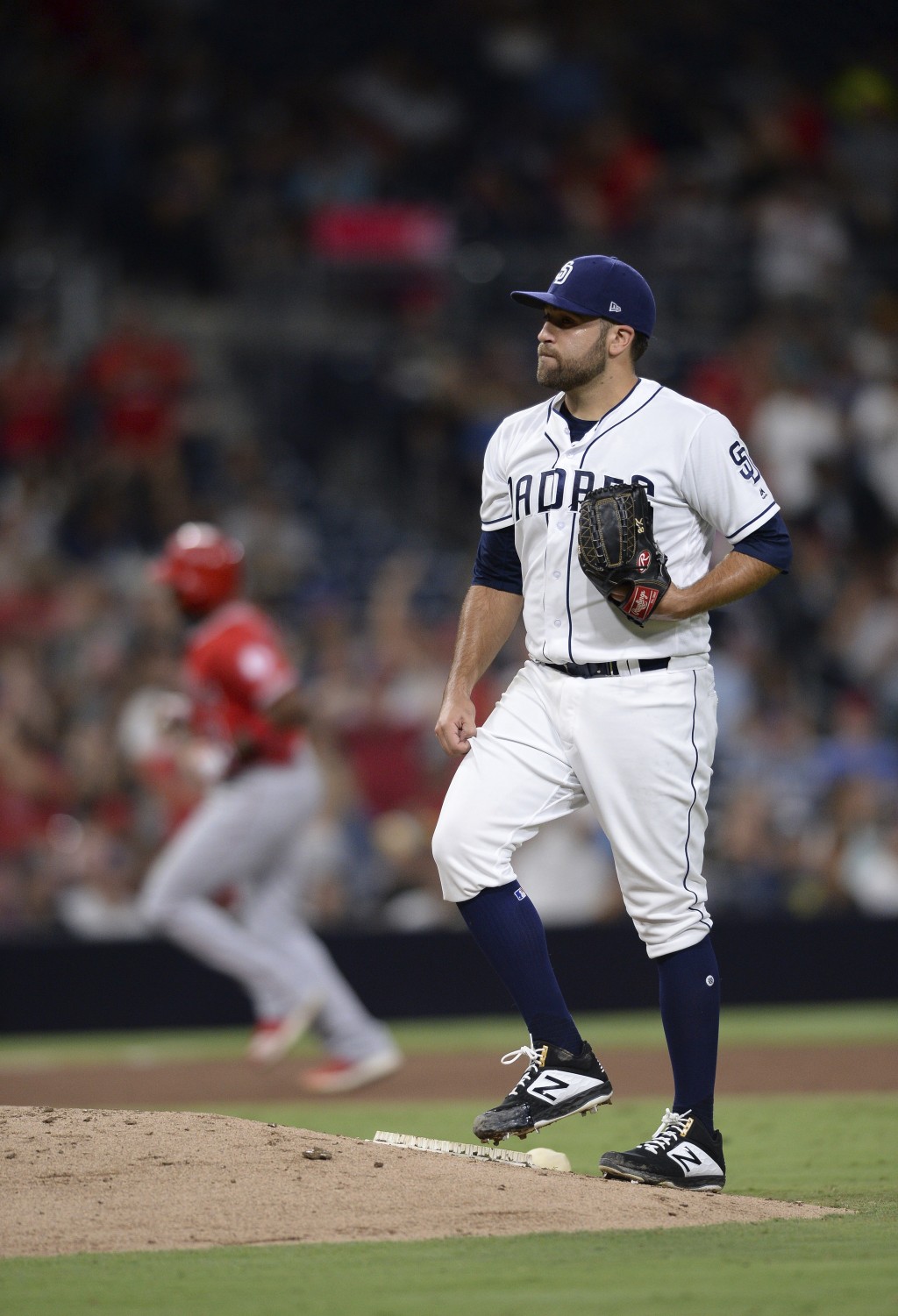 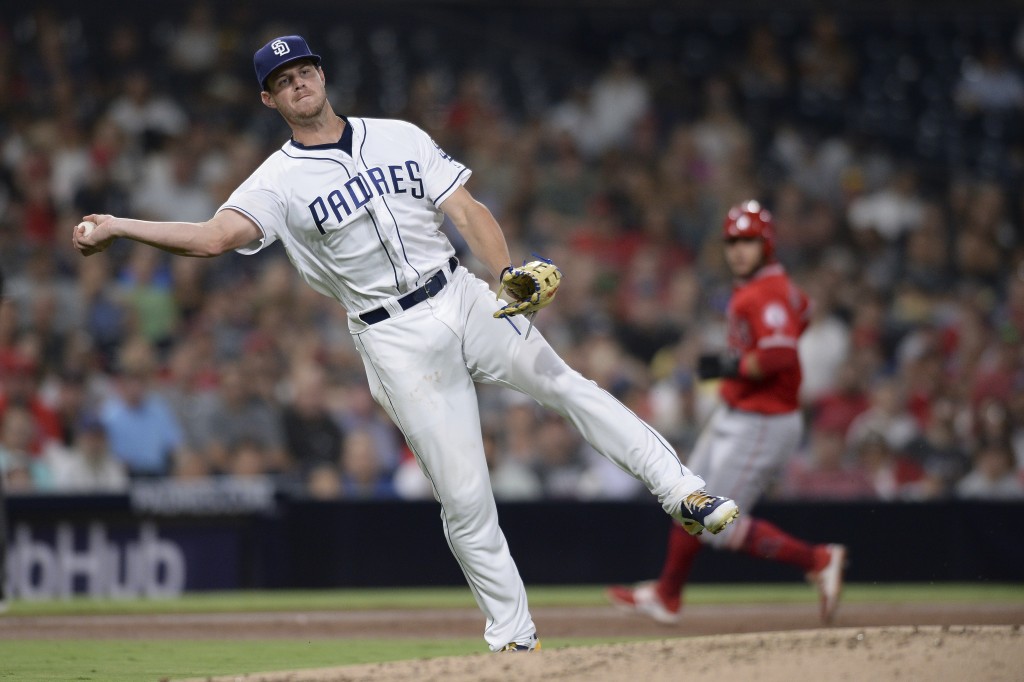 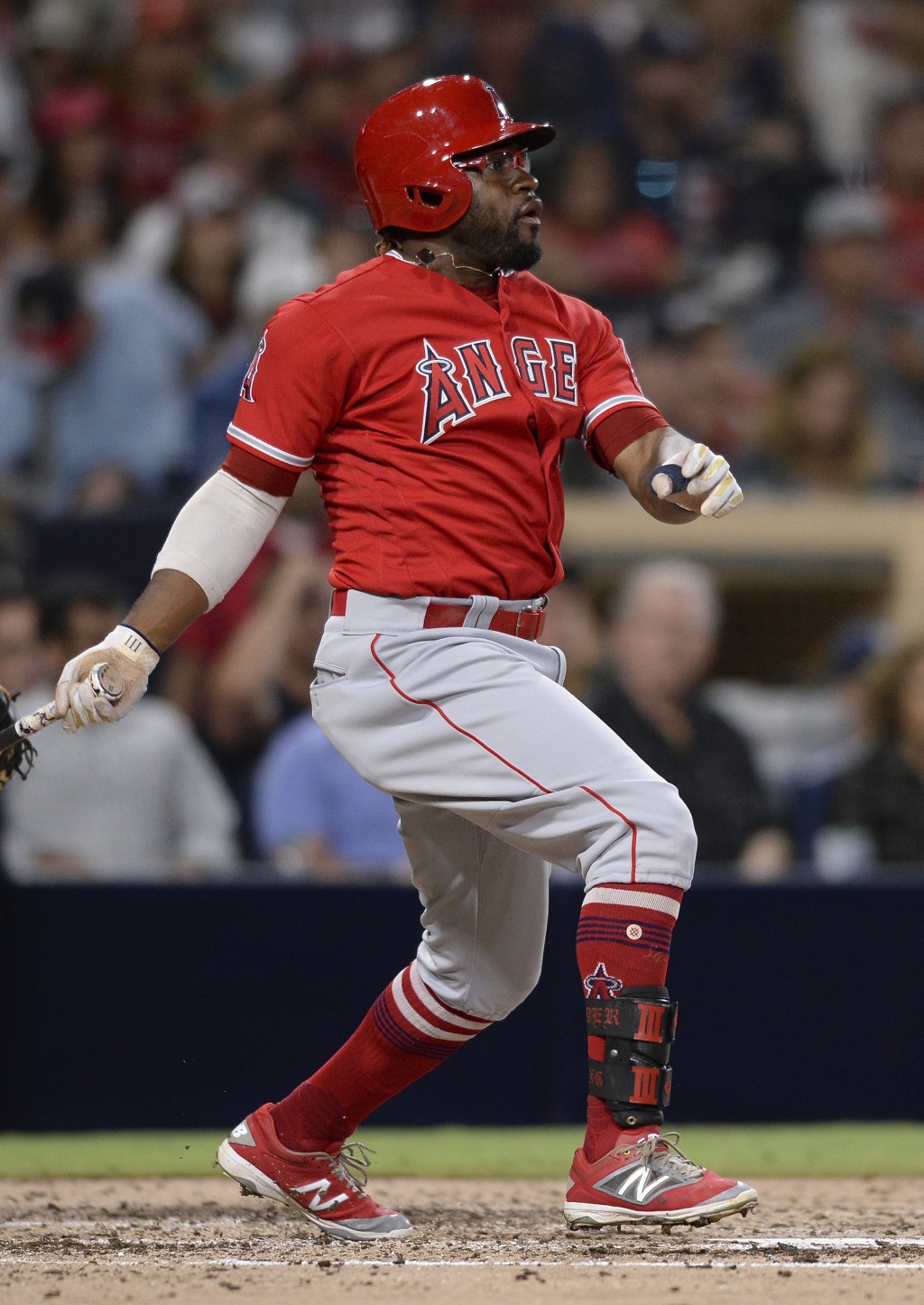 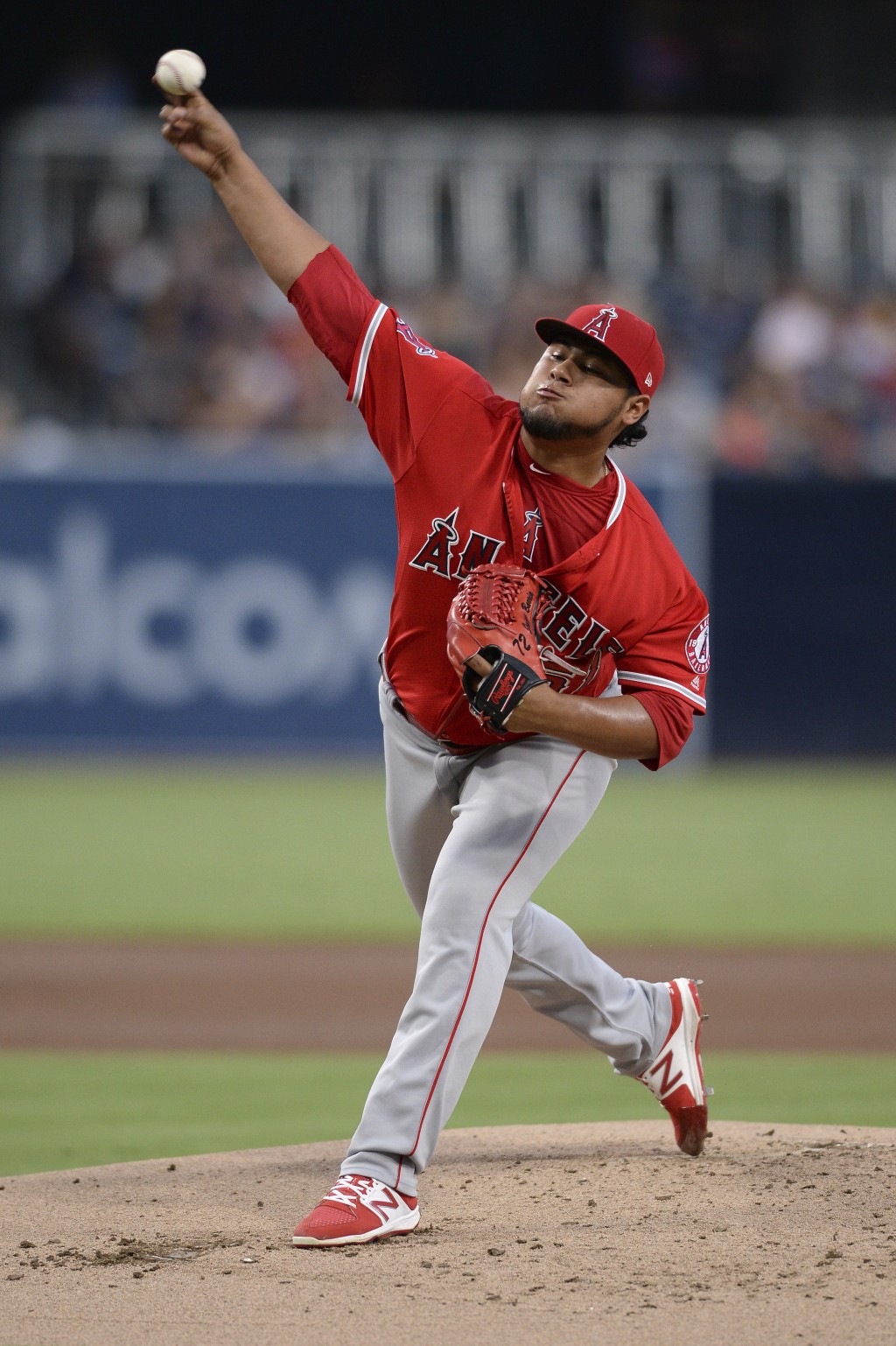 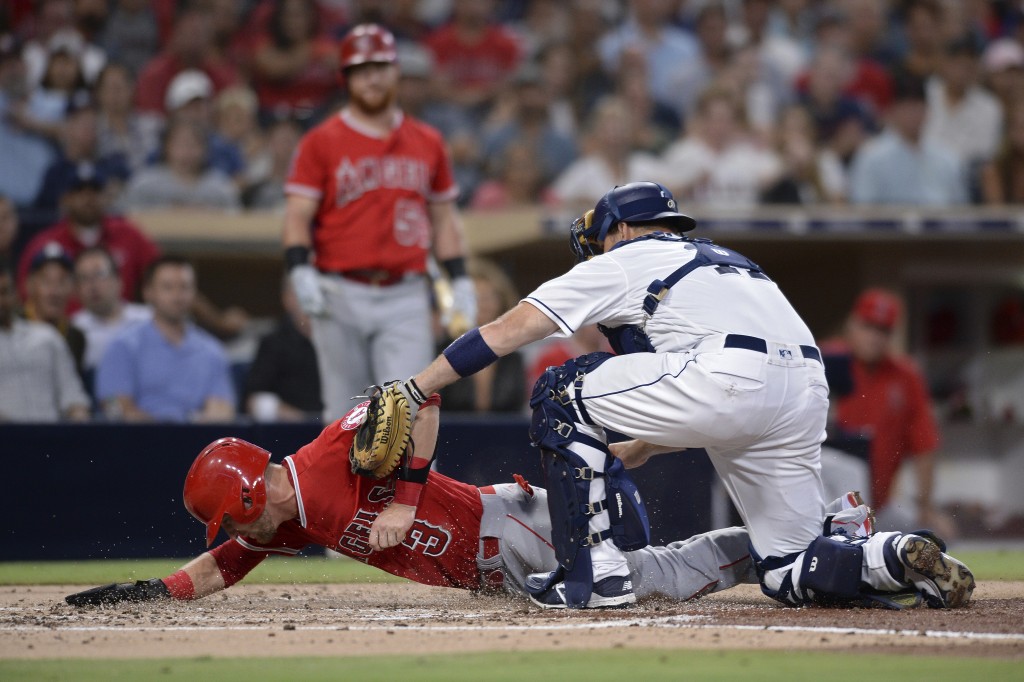 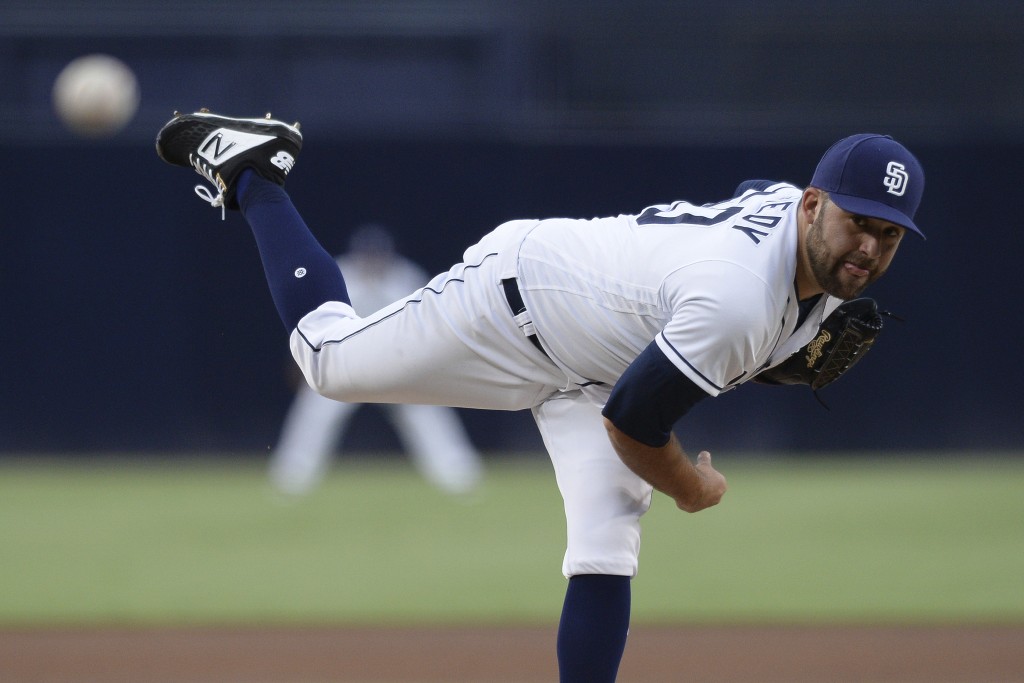 SAN DIEGO (AP) — Justin Upton had three hits, including a home run for the second straight night, and drove in three runs to lead the Los Angeles Angels to a 7-3 victory over the San Diego Padres on Tuesday night.

Eric Young Jr. tripled and had two RBIs, and rookie Taylor Ward had two hits, including an RBI double in his first major league at-bat, as the Angels won their second in a row over San Diego.

Upton crushed a 1-1 pitch from Brett Kennedy 435 feet into the left-center field bleachers for his 26th homer of the season to make it 5-1 in the fifth inning.

Upton, who capped the Angels' 10-inning win Monday night with a two-run shot, added an RBI single in the seventh.

Freddy Galvis hit his third home run in three games for the Padres, a solo shot with one out in the fourth. It's the first time in his career that Galvis has homered in three consecutive games.

Young's triple came in the fourth when his liner to right-center field scooted past San Diego right fielder Travis Jankowski all the way to the wall, scoring Ward from first base.

Jaime Barria (8-7) held the Padres to one run and six hits in five innings, striking out seven while walking one, for his third victory in four starts after losing six in a row.

Kennedy (0-2) gave up five runs and nine hits over five innings in his second major league start. He lost his debut on Aug. 8 after becoming the first pitcher in the modern era (after 1900) to give up three consecutive home runs in the first inning of his debut.

Ward, the 26th overall pick in the 2015 draft, was called up Monday night after posting a .349 average with 14 homers and 60 RBI over 102 games split between Double-A Macon and Triple-A Salt Lake. He finished his debut 2-for-3 with a walk and an RBI.

After recording eight assists and a putout in his debut at third base Monday night, Wil Myers made a fine play at the position in the second inning, barehanding a slow roller and throwing out Andrelton Simmons at first.

Manuel Margot's single with one out in the second snapped an 0-for-16 slump. Travis Jankowski stole his 20th base of the season.

Angels: Shohei Ohtani came out of Monday night's 33-pitch bullpen session in "good" shape, Angels manager Mike Scioscia said. Ohtani is expected to throw a bullpen session Wednesday, increasing the intensity and number of his pitches. ... 1B Albert Pujols got the night off.

Padres: C Austin Hedges got the night off after starting 11 of the previous 13 games.

Padres: LHP Robbie Erlin (2-3, 3.36) is set to face the Angels for the first time. Erlin has made four starts and 27 relief appearances this year.