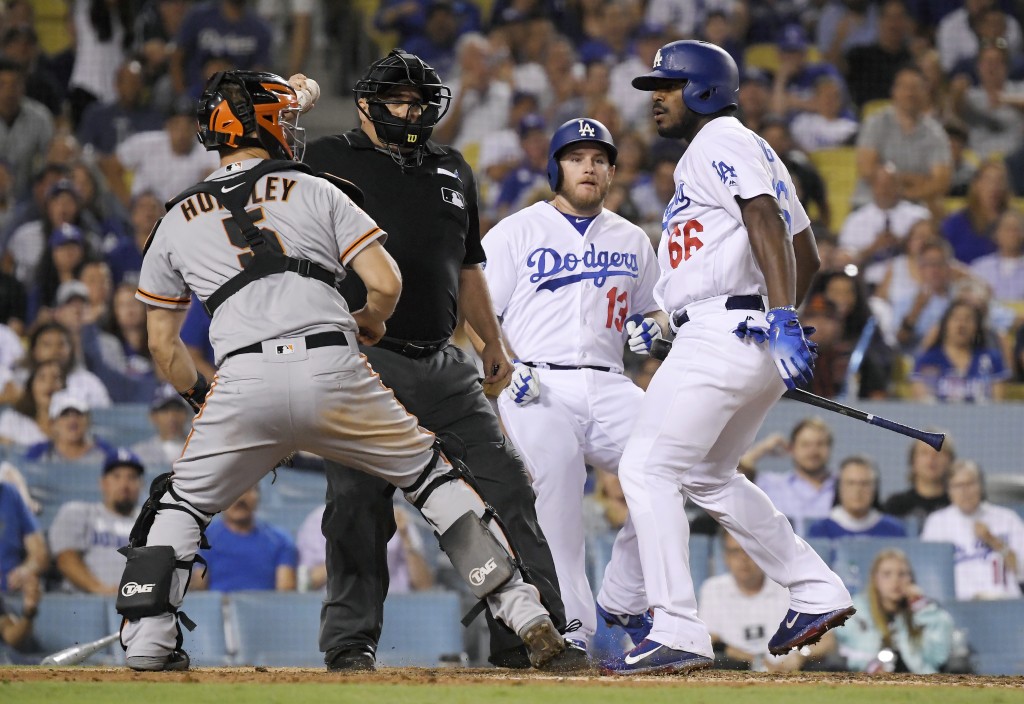 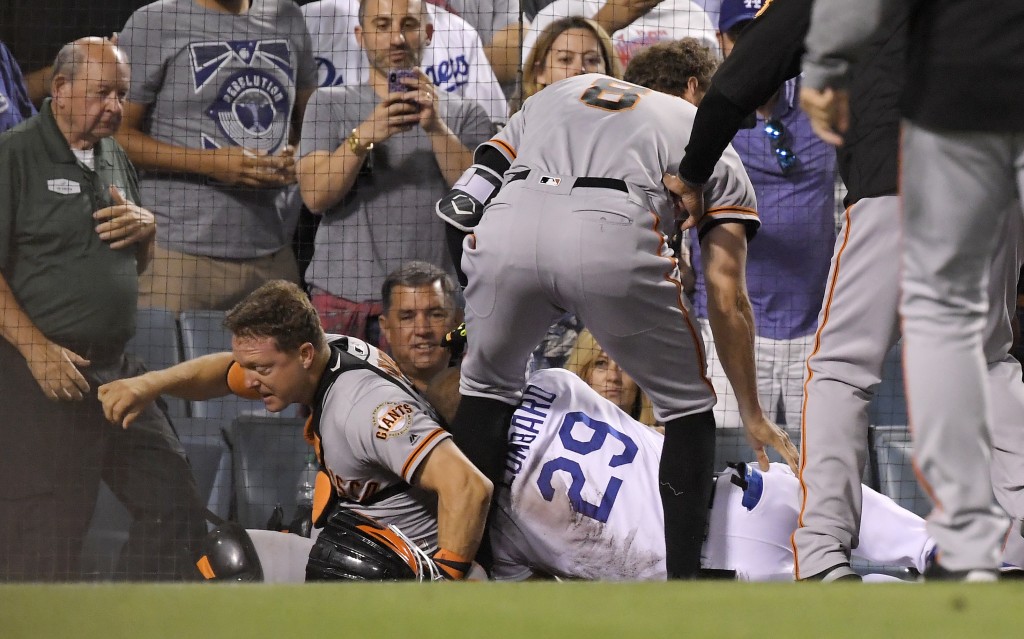 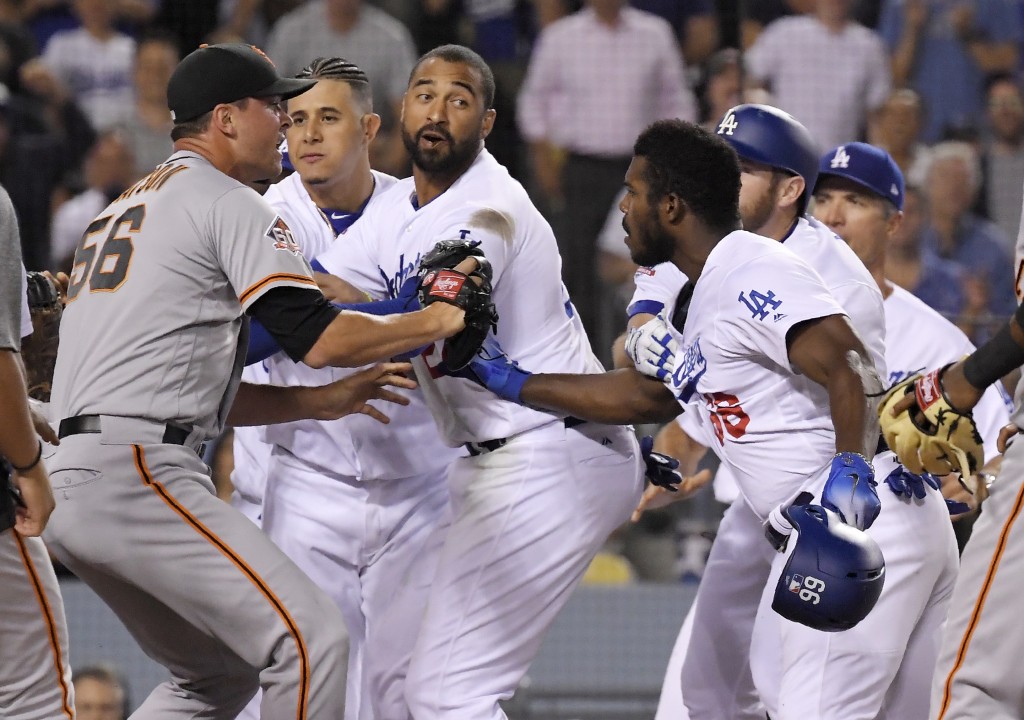 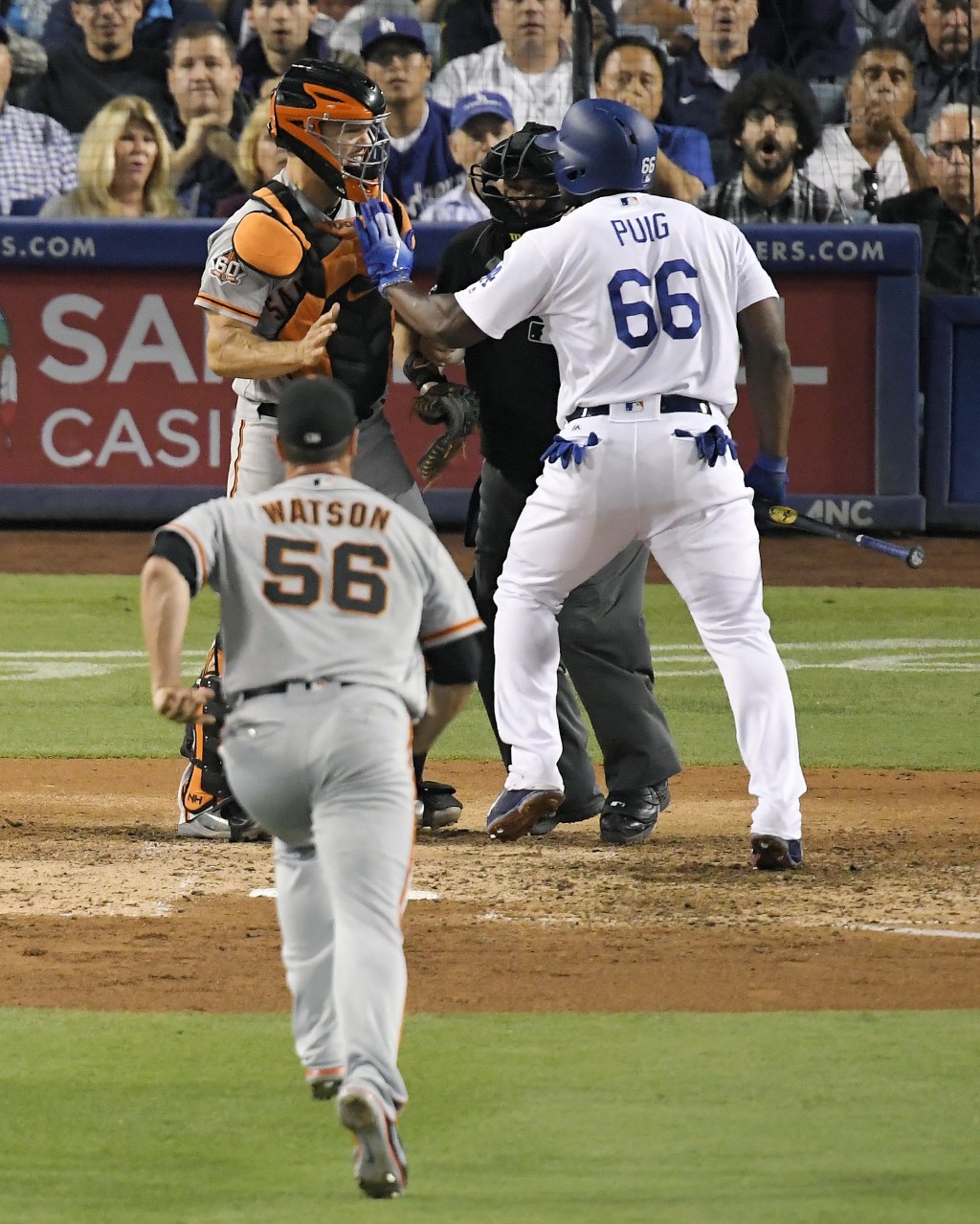 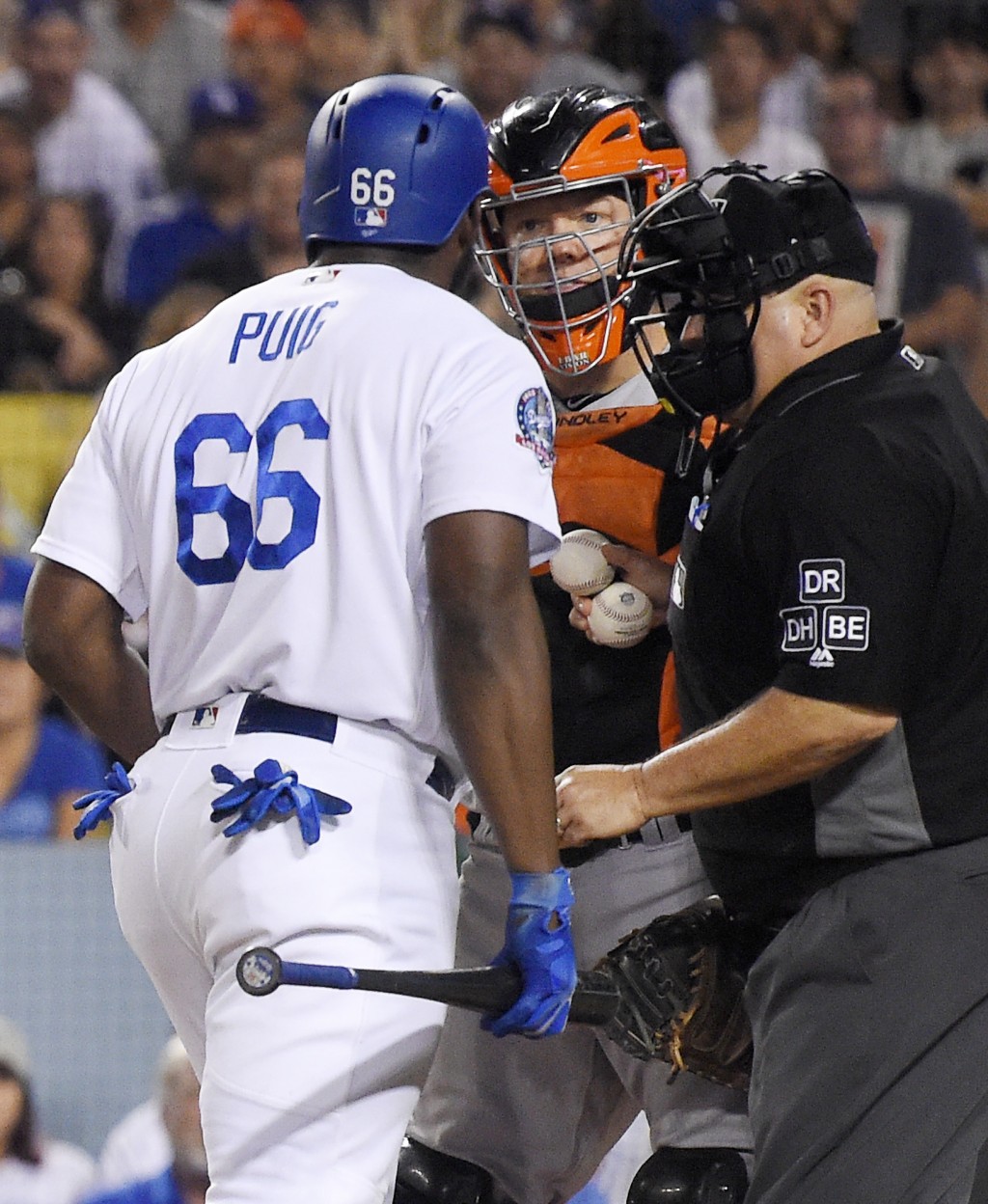 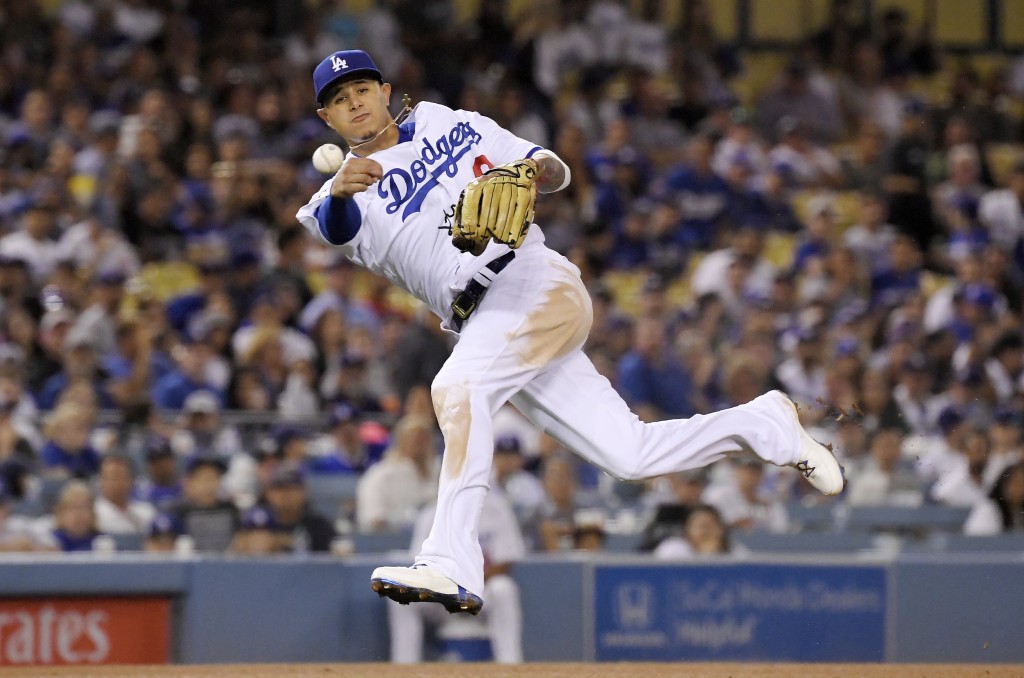 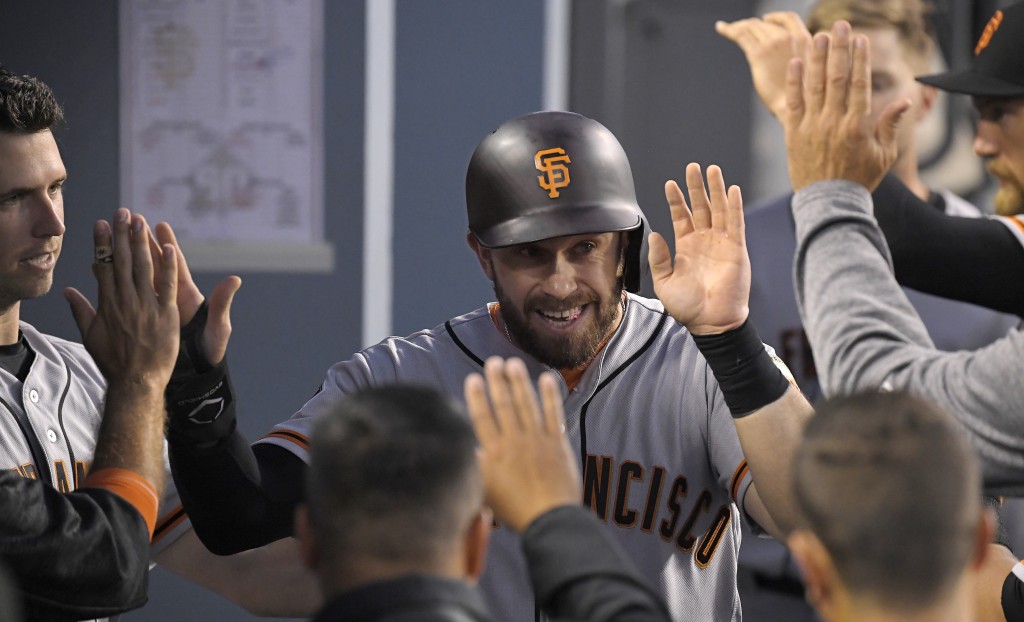 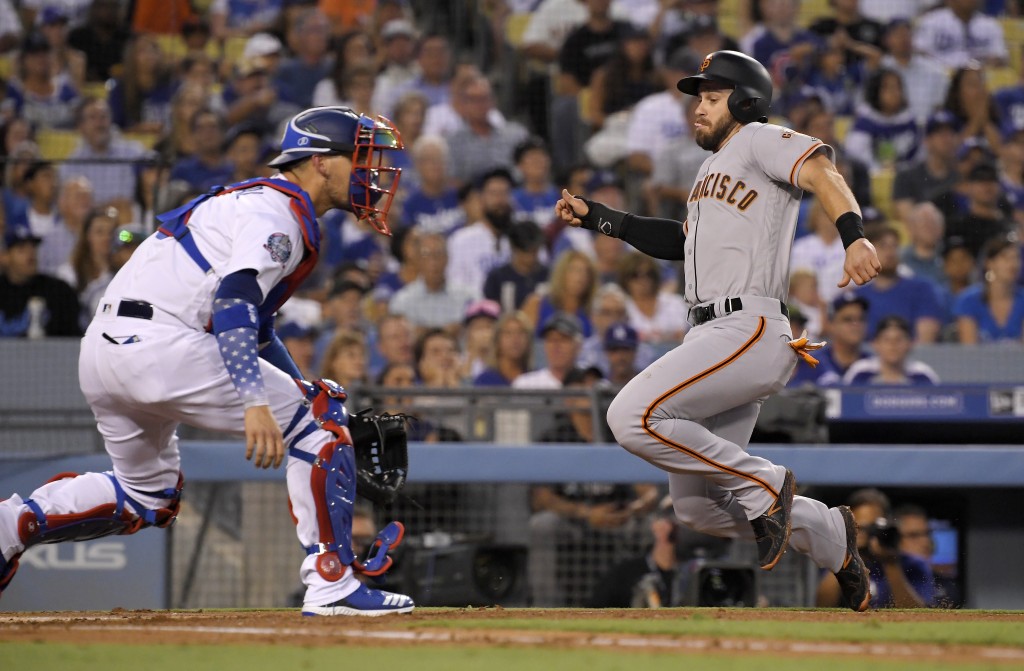 LOS ANGELES (AP) — Yasiel Puig took a swing at Giants catcher Nick Hundley during a benches-clearing scrap in the seventh inning, then Alen Hanson hit an RBI single in the ninth to lift San Francisco over the Los Angeles Dodgers 2-1 on Tuesday night.

The fracas starter when Puig swatted his bat in frustration after fouling off a pitch from Tony Watson, and Hundley said something to the mercurial slugger while still in his crouch. Puig turned around and walked toward Hundley, the catcher stood up, and they stood face to face and argued for a moment before Puig shoved Hundley twice.

That brought players out of the benches and bullpens. Puig and Hundley were momentarily separated, but Puig ducked around teammates, coaches and manager Dave Roberts before reaching back to hit Hundley. He smacked Hundley with an open hand across the front of his catcher's mask.

The players were then separated again for good. After discussing with both managers, the umpires ejected both Puig and Hundley.

It was the fourth career ejection for Puig, who had also got into a skirmish with Giants pitcher Madison Bumgarner in 2014.

Hansen's single in the ninth came off Kenta Maeda (7-8), making his first relief appearance of the season, and gave the Dodgers their fifth consecutive loss, all against the bullpen. The Dodgers had a play at the plate, but catcher Yasmani Grandal dropped the throw home.

The Giants led 1-0 most of the game after Hanson's RBI single in the second inning.

The Dodgers tied it with two outs in the eighth on Justin Turner's third double and Manny Machado's base hit off Sam Dyson (3-2). It was Machado's first RBI this month.

Will Smith threw a scoreless ninth to earn his 10th save.

Andrew Suarez started for the Giants and threw six scoreless innings, allowing only two hits. He walked three and struck out four.

Left-hander Alex Wood was coming off the disabled list for the Dodgers but missed only one turn with a sore hip. He threw 92 pitches over five innings, allowing one run, three hits and a walk while striking out six.

Giants: SS Brandon Crawford was out of the lineup Tuesday as he continued his concussion protocol following a collision with OF Gorkys Hernandez on Monday. Manager Bruce Bochy said he may be available off the bench. ... 1B Brandon Belt (hyper extended right knee) rejoined the team following a Monday rehab start and entered the game at first base in the seventh after Hundley was ejected. He singled and scored on Hanson's single in the ninth.

Dodgers: 2B Brian Dozier was back in the lineup after leaving Monday's game due to dizziness. The Dodgers said an EKG showed abnormalities, but Dozier said he's long had an irregular heartbeat. A cardiologist ran a battery of tests Tuesday and he was cleared to play. "When you're talking about the ticker, you want to make sure everything is OK, so we went through it all," he said. "And everything was muy bien." Dozier blamed the dizziness on taking a sinus medication. ... Former phenom Julio Urias (shoulder surgery) was scheduled to throw two-plus innings for Class A Rancho Cucamonga on Tuesday. The Dodgers hope to bring him back this season as a reliever. ... RHP Ross Stripling's move to the bullpen may be delayed by a sore back. ... RHP John Axford was placed on the 10 DL with a fractured fibula.

Giants: LHP Derek Holland (6-8, 3.97 ERA) is scheduled to start Wednesday against the Dodgers. Holland won his last start Aug. 10 vs. the Pirates, earned his first win since June 20 at Miami.

Dodgers: LHP Hyun-Jin Ryu (3-0, 2.12) is scheduled to come off the disabled list and make his first start since going down with a badly strained groin on May 2.