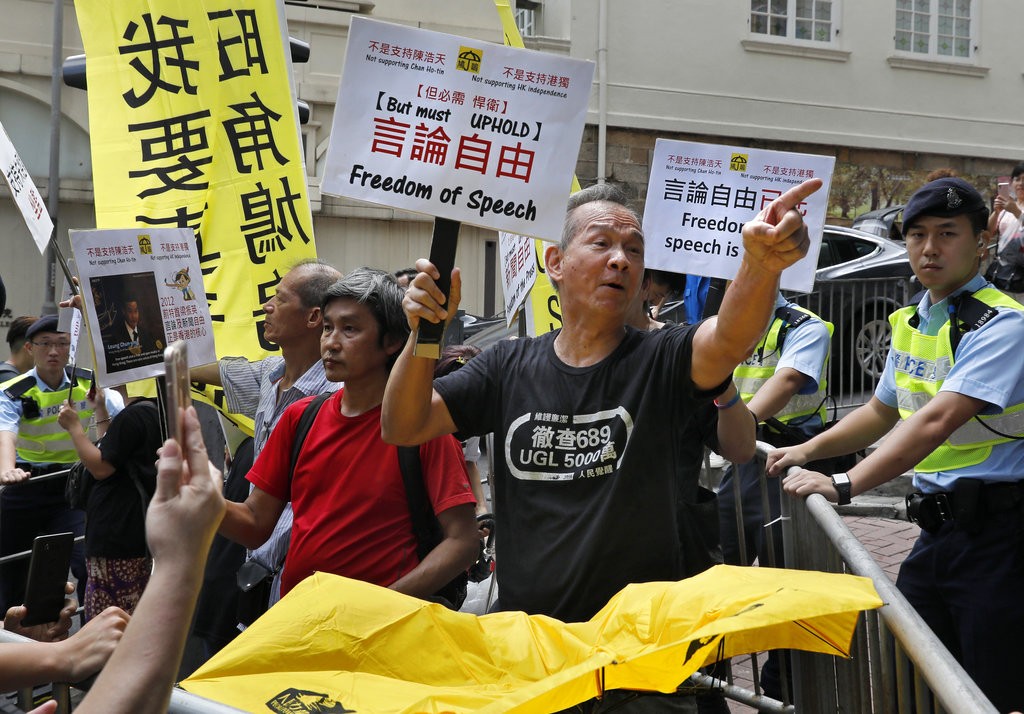 HONG KONG (AP) — A Hong Kong pro-independence activist decried Beijing's rule over the city as modern-day colonialism in a speech Tuesday to a foreign journalists' association that defied the Chinese government's demand that the event be canceled.

The Chinese government swiftly criticized the talk, saying that freedom of speech in Hong Kong does not extend to discussions of independence for the Chinese city, which it said was a threat to national security. "We express our indignation and condemn it," the Chinese foreign ministry office in Hong Kong said in a statement.

The government's demand raised questions about Beijing's growing influence in the former British colony, which was promised semi-autonomy and freedom of speech as part of the 1997 handover. President Xi Jinping and other officials have warned separatist activity would not be tolerated.

Small groups of pro-Beijing and pro-democracy protesters gathered outside the Foreign Correspondents Club's building in Hong Kong ahead of and during the speech by Andy Chan of the Hong Kong National Party. Some pro-Beijing protesters carried banners saying "Hong Kong independence is poisonous."

Current and former Hong Kong leaders have criticized the FCC for hosting Chan, whose party is facing a possible ban on national security grounds.

"Sadly, we are a nation that is quickly being annexed and destroyed by China," Chan told the FCC audience. "The cry for Hong Kong independence is therefore a cry against colonial invasion."

The Chinese government criticized the FCC for hosting Chan, comparing Hong Kong's pro-independence advocates with Nazis in Germany and terrorists in the United States. It said governments have the right to restrict expressions of ideas that, it said, threaten social order.

"No country will allow foreign institutions to invite separatist forces on their own land to advocate splitting the country and inciting violent resistance," the statement said. During his talk, Chan said he condemned violence in political action.

The 75-year-old FCC has previously hosted politicians and newsmakers, including pro-Beijing speakers, at its clubhouse in central Hong Kong. It says it believes its members and the public have the right "to hear the views of different sides in any debate."

The perception that Beijing is reneging on its promise of semi-autonomy and eroding Hong Kong's free elections and freedom of speech is helping fuel a rising generation of young activists calling for greater autonomy, if not outright independence.

Huge pro-democracy protests erupted in 2014 in response to the decision by China's ruling Communist Party to retain the right to effectively pre-screen candidates for Hong Kong's leadership.

Hong Kong officials have dismissed the FCC's argument that Chan's appearance amounts to a free speech matter, with the territory's former chief executive, C.Y. Leung, equating the FCC event with giving a platform to "criminals and terrorists."

Current Hong Kong leader Carrie Lam told reporters on Sunday that it was "inappropriate" for the FCC to host Chan and asked the organization to respect that Hong Kong is an unalienable part of China.