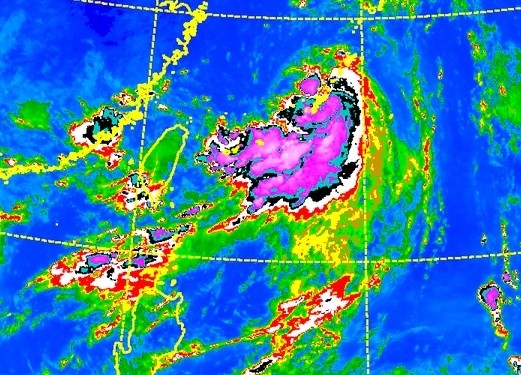 TAIPEI (Taiwan News) -- As southwest winds continue to affect Taiwan, Central Weather Bureau (CWB) forecaster Wu Yi-fan (吳依帆) said rain is likely throughout the country, in addition a tropical depression just to the east of Taiwan may affect the weather tomorrow and could become a typhoon.

Wu said that due to the influence of southwest winds and a tropical low-pressure cloud system, showers and thunderstorms are likely in southern and central Taiwan, while other areas could experience brief periods of rain, including sudden downpours, especially in the afternoon. Rain is also possible at night, early morning hours and mid morning. High temperatures are expected to range from 31 to 34 degrees Celsius throughout the country. While Miaoli, Yilan and Hualien could see highs of up to 36 degrees.

A tropical depression hovering 550 kilometers east of Taipei is moving at a speed of 15 kilometers per hour. Starting from tomorrow, the periphery of the system will start to affect Taiwan's weather and Wu said he cannot rule out the possibility of it developing into a typhoon and CWB is closely monitoring it.

As for the other tropical storms in the region, Tropical Storm Hector has weakened into a tropical depression. Tropical Storm Bebinca is still in the sea off the coast of southeast China and is expected to move west and affect Guangdong and Hainan, while not having a direct impact on Taiwan.

Tropical Storm Leepi made landfall in Kyushu, Japan in the early morning and will gradually weaken in the future as it turns north-northeast. Tropical Storm Rumbia, the 18th tropical storm of the season, is expected to slow down in the East China Sea before impacting China, but is not expected to have a direct impact on Taiwan. However, strong southwest winds introduced by its periphery will still bring rain and a high sea waves to Taiwan.