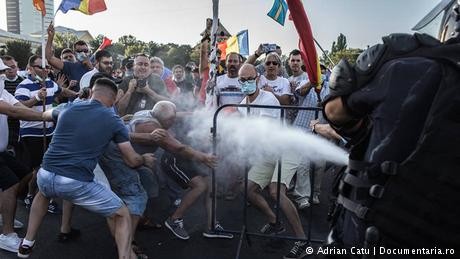 "Our correspondent was wearing his press credential visibly and also identified himself to the police officers as a journalist," Jumpelt said. "In spite of this, a group of police officers took to beating him with their shields and clubs."

Several journalists, including one cameraman from Austrian public broadcaster ORF, were assaulted while covering the protest. Israeli tourists were also beaten by police, according to Israeli officials.

DW has informed the German Foreign Ministry and the German Government Press Office of the case.

Read more: Opinion: What is happening in Romania is not democracy

'Without having to fear'

"We expect the Romanian authorities to take the necessary steps to bring those police officers involved in this outrageous incident to justice," said Jumpelt.

Thousands of anti-government protesters continue to take to the streets of Bucharest and other Romanian cities to rally against judicial reforms targeting anti-corruption laws in the EU country. But the government has yet to appease protesters, prompting calls for resignations.

Read more: Why are police clashing with expats in Romania?

Due to the gravity of the situation in Romania, DW will continue to cover newsworthy events in the country. Jumpelt urged authorities to guarantee the safety of journalists.

"We are also calling on you to ensure that journalists can report freely about any future demonstrations without having to fear physical harm from Romanian police forces," Jumpelt added.