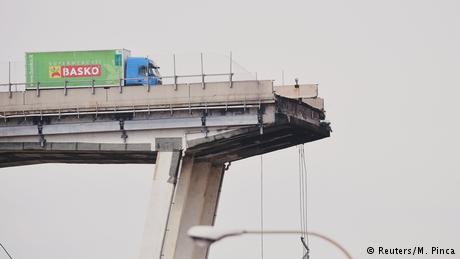 The Morandi Bridge — known to locals as Genoa's "Brooklyn Bridge" — was a key artery to the Italian Riviera and to France's southern coast. A huge section of the structure collapsed on Tuesday in the Italian city of Genoa, sending cars and trucks plunging into heaps of rubble. Scores were killed and the death toll is expected to rise.

Regional weather services had issued a storm warning for the morning of the collapse and the national police force said on Twitter the disaster happened amid a "violent cloudburst."

The civil protection agency could not confirm witness accounts that the bridge cracked after being hit by lighting.

Two years ago Antonio Brencich, a professor specializing in reinforced concrete construction at Genoa University, called the bridge a "failure of engineering" during an interview. "That bridge is wrong. Sooner or later it will have to be replaced. I do not know when. But there will be a time when the cost of maintenance will be higher than a replacement," he told local TV station Primocanale.

The Morandi Bridge— named after its designer Riccardo Morandi— was built in the 1967. Italy's CNR civil engineering society pointed out on Tuesday that the working lifespan of bridges built in the 1950s and '60s was some 50 years. Tens of thousands were built during those decades using reinforced concrete, the best known technology at the time.

Mehdi Kashani, an associate professor in structural mechanics at Britain's University of Southampton, said maintenance issues and pressure from "dynamic loads" such as traffic and wind could have resulted in "fatigue damage in bridge components."

"As this reinforced and pre-stressed concrete bridge has been there for 50 years, it is possible that corrosion of tendons or reinforcement may be a contributory factor," said Firth.

Comments made by CNR suggest the bridge should have reached the end of its 50-year lifespan around last year. The bridge was undergoing reinforcement work at the time of the collapse and was under constant monitoring.

The cost of updating and reinforcing '50s and '60s bridges is more than it would cost to destroy and rebuild them, CNR said. As such, it called for a major program to replace most of the bridges with new ones which would have a lifespan of 100 years.

Tuesday's tragedy will likely reopen a debate on the need to invest billions on major infrastructure projects. Within hours of the bridge collapse, the country's government said it showed Italy needed to spend more to improve its dilapidated infrastructure, ignoring EU budget constraints if necessary.

"We should ask ourselves whether respecting these (budget) limits is more important than the safety of Italian citizens. Obviously for me it is not," said Deputy Prime Minister Matteo Salvini, who is also leader of the nationalist League party in a power-sharing government.

Whatever the cause of the collapse, Salvini said he wanted the names of those to blame because a tragedy like this in 2018 was not acceptable. "They will have to pay, pay for everything, and pay a lot," he said.