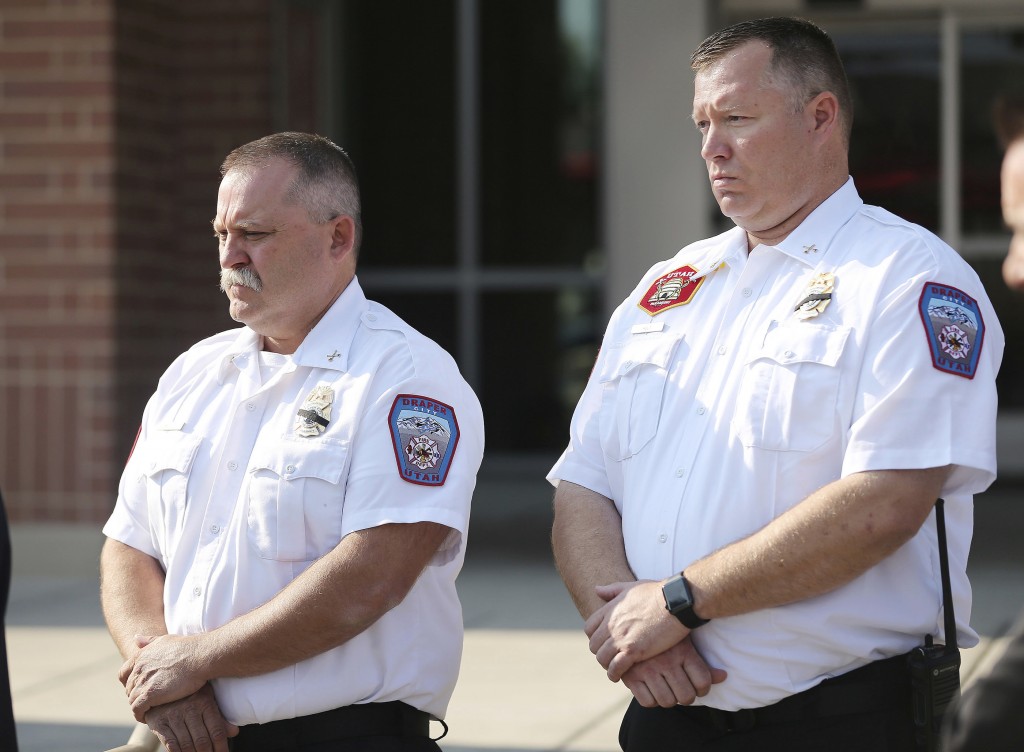 DRAPER, Utah (AP) — Utah firefighter Matthew Burchett said goodbye to his wife and 6-year-old son in early August and volunteered to head to California along with 37 other firefighters from the state to help battle blazes that have been ravaging homes in the coastal state.

On Monday night, Burchett, 42, died after he was injured while fighting the largest recorded blaze in California history, the Mendocino Complex fire north of San Francisco. California officials have declined to provide details about what led to Burchett's death.

In Utah, city and fire officials in the Salt Lake City suburb of Draper where Burchett lived and worked mourned his death on Tuesday. A large American flag flew at half-mast outside the town hall, and smaller American flags were put up lining the sidewalk.

Draper Mayor Troy Walker said at a news conference that Burchett was a veteran firefighter with extensive experience working on wildfires. He said he didn't have details about the events that led to Burchett's death.

"These men are American heroes. They literally stand in the fire to help other people," Walker said. "I don't know how you get better than that. I know he was proud to do it. I know all of them are."

He was one of five Draper firefighters who went to California, Walker said.

Burchett had just started with the Draper Fire Department in May after 20 years with another Salt Lake City area fire department. He was a battalion chief who was hired to oversee the city's wildland firefighting efforts, colleague Bart Vawdrey said.

Burchett was a good man with a dry wit who was very professional and a "master of his craft," said Vawdrey, a fellow battalion chief in Draper.

"It's tough anytime you lose a brother," Vawdrey said. "We get into this profession to help people, and Matt jumped at the chance to go assist in California."

Firefighters from all over the country have been helping California battle a series of deadly and devastating wildfires in recent weeks that have spread through drought-parched forests and rural communities.

Six firefighters have died in those wildfires.

Funeral services are pending for Burchett.

Utah Gov. Gary Herbert said in a statement that he's heartbroken over Burchett's death and offered his prayers for Burchett's wife and son.

"When he left with his fellow firefighters to battle the wildfires in California we were so proud of his service — now his heroism leaves us both proud and devastated," Herbert said. "He gave everything to defend the lives of others."