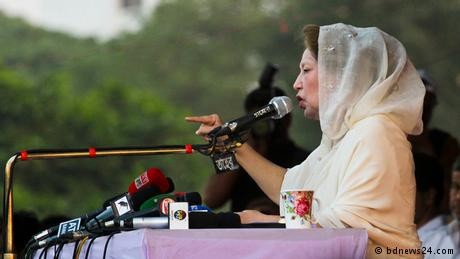 At 72-years-old, former Bangladeshi Prime Minster Khaleda Zia's political ambition remains strong, even as she faces dozens of legal cases. Zia has been sitting in a Dhaka jail since February after she was sentenced to five years imprisonment for transferring 21 million taka ($248,000, €218,000) from a charity, the Zia Orphanage Trust, to her personal account.

Zia was granted bail in the orphanage case, but her release was suspended. There are currently 34 cases filed against her across the country. Her supporters say the charges are politically motivated. Zia is the leader of the opposition Bangladesh Nationalist Party (BNP), the biggest adversary of the ruling Awami League (AL), led by 70-year-old Sheikh Hasina.

On Monday, Zia was granted bail in a case related to defamation, but remains in prison because of other pending charges. Though Zia's political future looks dire, BNP senior leaders remain hopeful that she will be released from prison and take part in Bangladesh's national elections planned for the end of 2018.

"In most of the cases she got bail, except three that are still pending in two courts outside Dhaka. We are hopeful to get bail on those three cases as well," Moudud Ahmed, Khaleda's lawyer and a senior BNP leader, told DW.

Can Zia take part in the election?

Zia's lawyer Ahmed said there is an "unnecessary delay" in lower courts when it comes to processing the cases against her. The lawyer also contends that the government is unwilling to let Zia participate in the national polls. Furthermore, there is a constitutional barrier to her participation in elections.

Bangladesh's constitution disqualifies anyone convicted of "immoral crimes" from election for at least two years. Zia's lawyers said that Bangladesh's high court can still suspend her "conviction" and "sentence." If this happens, there will be no legal barrier against her contesting in the polls.

Ahmed claimed that there are instances where convicted individuals have served as elected members.

"If a convicted person can't take part in elections, then how can some ministers and MPs serve in the current government? The law should be the same for everyone," he said.

Badiul Alam Majumder, a prominent Bangladeshi political observer, told DW that the final decision will come from the election commission.

"Everything will depend on what happens in the next two to three months," he said. "The situation is very complicated and it is becoming even more complicated."

A key Zia adviser and Bangladeshi political analyst, Emajuddin Ahmed, told DW that he doubts Zia will participate in the election. "The pace at which these cases are running indicates that they will linger even after the election," he said.

Khaleda Zia was first elected prime minister of Bangladesh in 1991, after the BNP formed a government when the autocratic rule of former President HM Ershad ended in 1990 following massive protests.

Since then, Zia and the BNP have been locked in a political rivalry with Sheikh Hasina and the AL party, and there has been an alternation of rule between the two.

In 2014, the BNP boycotted elections and accused the AL of rigging the vote. BNP supporters were criticized for violent protests and the AL government was accused of repressing opposition leaders.

Political observers say that the decision to boycott the 2014 elections was a political mistake, which led to frustration among the BNP's political base.

Analyst Ahmed said the future of the BNP is uncertain along with that of Zia, whose health is unstable.

"According to the constitution, if she loses the case and remains imprisoned for at least two years, then she won't be able to contest any election for five more years," he said. "She is old and sick. I see a deep uncertainty in her political career."