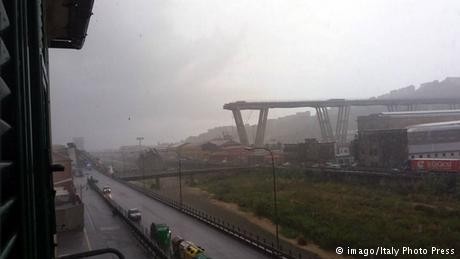 Part of a motorway viaduct in the northwestern Italian city of Genoa collapsed on Tuesday, the local fire brigade said, adding that several cars could have been involved in the accident.

Italian news agency Adnkronos, citing local ambulance services, reported that there were "dozens of dead" in the collapse.

Italy's Transport Minister Danilo Toninelli said the bridge collapse looked like an "immense tragedy" and that he was "following with the greatest apprehension what has happened in Genoa."

Interior Minister Matteo Salvini said that some 200 firefighters had been deployed to the seen of collapse. "We are following minute by minute the situation of the bridge collapse in Genoa," he posed.

A witness told Italian broadcaster SkyTG24 that he could see "at least eight to nine" vehicles crushed under the rubble from the bridge and "said it was an apocalyptic scene."

The incident took place on the eve of a major Italian holiday, Ferragosto, and traffic would likely have been busier than usual. The Morandi Bridge is one of the main thoroughfares connecting the A10 motorway towards France and the A7 that runs northwards towards Milan.