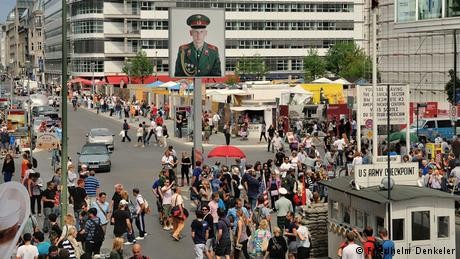 In 1961, after the Wall was built, tanks faced each other at Checkpoint Charlie in Berlin making it a world-famous symbol of German division. Today, however, visitors can only barely understand the significance of the former border control point on Friedrichstraße. 57 years after the construction of the Wall and 28 years after its fall, the place is an overflowing tourist magnet. There isn't much left of the original east west border crossing, which became a symbol of the Cold War.

s it historical heritage or commerce?

In front of a reconstructed US Army guard house, fake soldiers pose with US flags, and charge three euros for a photo. A sign warns as in the past: "You are now leaving the American sector." It is a copy, as the original is to be found in the private Wall Museum just a few meters away. Next to it is the rotunda by artist Yadegar Asisi with the panorama, which depicts an average day in divided Berlin. A few steps further on, "Die Bude" (the shed) offers Currywurst sausage and French fries. Between them a street vendor attempts to sell gas masks and military hats. And "Charlies Beach" is the place to "chill out".

As an "antithesis to trivialization," the Berlin Senate set up a black box providing information about the Cold War. The area is framed by display boards with historical photos and descriptions. "For 28 years the place has lacked a clear design concept", complains the director of the Berlin Wall Foundation, Axel Klausmeier. Others speak of a kind of "Disneyland", located 200 meters from the memorial to Peter Fechter who was shot and killed by East German border guards at the Berlin Wall. The Berlin Senate is also unhappy with the current state of affairs. "The way Checkpoint Charlie is being used and experienced today may well be a place that attracts masses of visitors, but its provisional design and predominantly touristic use is regarded with great ambiguity," said Katrin Lompscher, Senator for Urban Development from the leftist Linke party .

A concept is urgently needed

Now, after several ownership changes, local authorities and a private investor have agreed on the corner points of a development for the area. The aim is to make clear the extent of the border crossing in the future as well as creating an "urban square with open spaces". In addition, a museum is to be set up in one of the new buildings as a "place of education and remembrance". The conservative CDU party, which sits in opposition in Berlin's state government, speaks of "opaque agreements", while Klausmeier, the foundation's director, talks of a "major joint effort" by the Senate and the investor. The opportunity to adequately explain the historical dimension of the site is within reach. The foundation is developing a concept for the museum. When it will be built and opened is still to be decided.

And where did the Berlin Wall stand again?

Only a few weeks after the Berlin Wall was built in August 1961, the world watched with bated breath. On October 27, 1961, following the stationing of American tanks, Soviet tanks also arrived at the checkpoint. For 16 hours, the superpowers equipped with live ammunition faced each other across the border - only meters apart. It was one of the most precarious moments of the Cold War. The test of strength could have quickly turned into another war. The East German government afterwards quickly transformed Checkpoint Charlie into a fortress-like bulwark. Only foreigners, diplomats and allied military personnel were permitted to pass the inner-city border between East and West Germany.

Today, tourists from all over the world stand spellbound in front of display boards or have themselves been transported to the time of partition by travel guides. Many want to see "The Wall" and are disappointed. The pavement strip in the ground, which traces the course of the wall, is hardly noticed by most people. "The Wall was here? Wow, I wouldn't have thought that," says 26-year-old Amira from the US state of North Carolina. Pietro Lensi (54) from Italy misses remnants of the Berlin Wall and a memorial at the square: "This should be done differently". Lucy Gilcrest (32) from England thinks: "An impressive place, but quite touristy." The original Berlin Wall on Bernauer Strasse? No, all three of them have never heard of it.

In fact, it is difficult to experience traces of the division in Berlin. In the euphoria after the fall of the Wall, large parts of the monstrous concrete barrier, including watchtowers and signalling systems, were demolished, smashed or sold. Land - some of it in a prime inner-city location - went to private investors. Thought came later.

Apart from the Bernauer Strasse Wall Memorial, the only other places of remembrance are the East Side Gallery, the Martin-Gropius Building Wall section - and Checkpoint Charlie. The planned museum on the history of the Cold War is the last unfinished project of Berlin's concept of commemorating the Wall, which is based on decentralized memorials. The foundation director Klausmeier imagines the Checkpoint in future as a "networking place". From here it is possible to reference other places in the history of the German partition. After all, Berlin is "the largest open-air museum of contemporary history in the world".