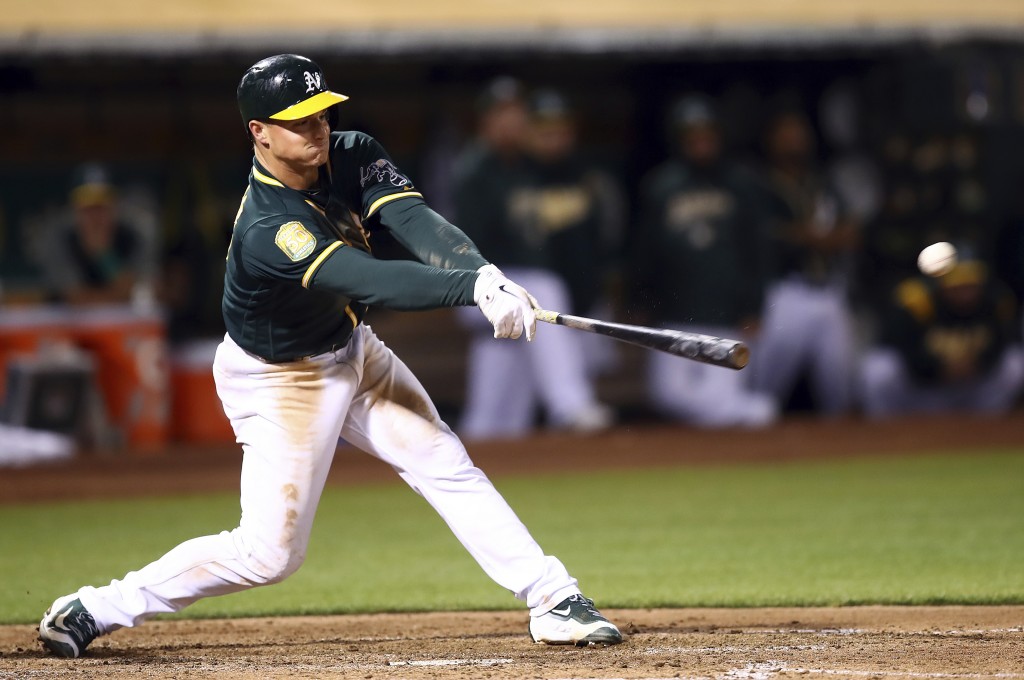 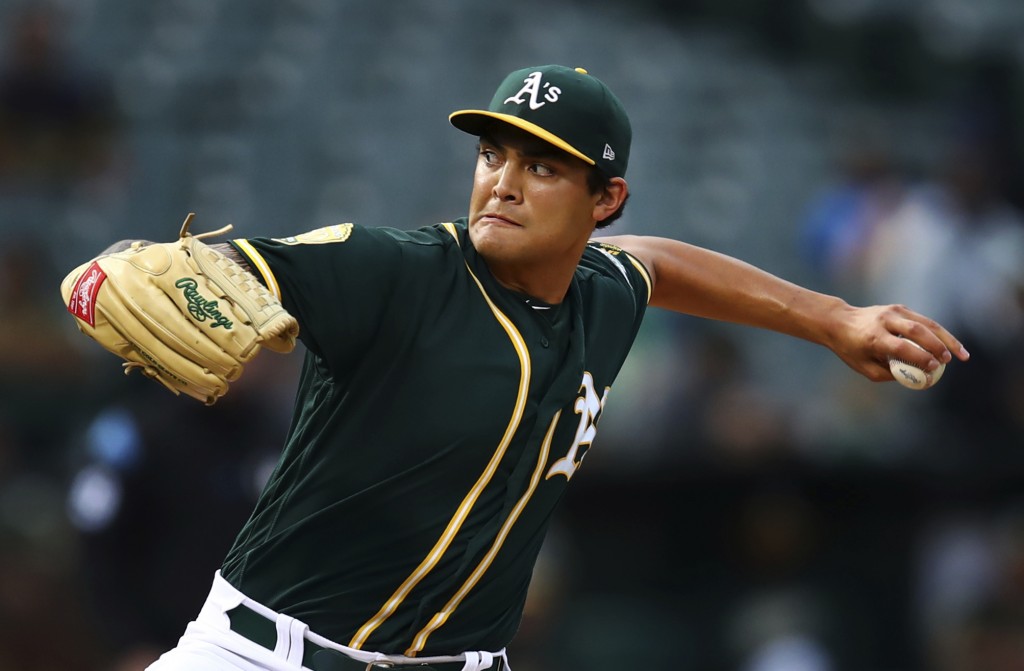 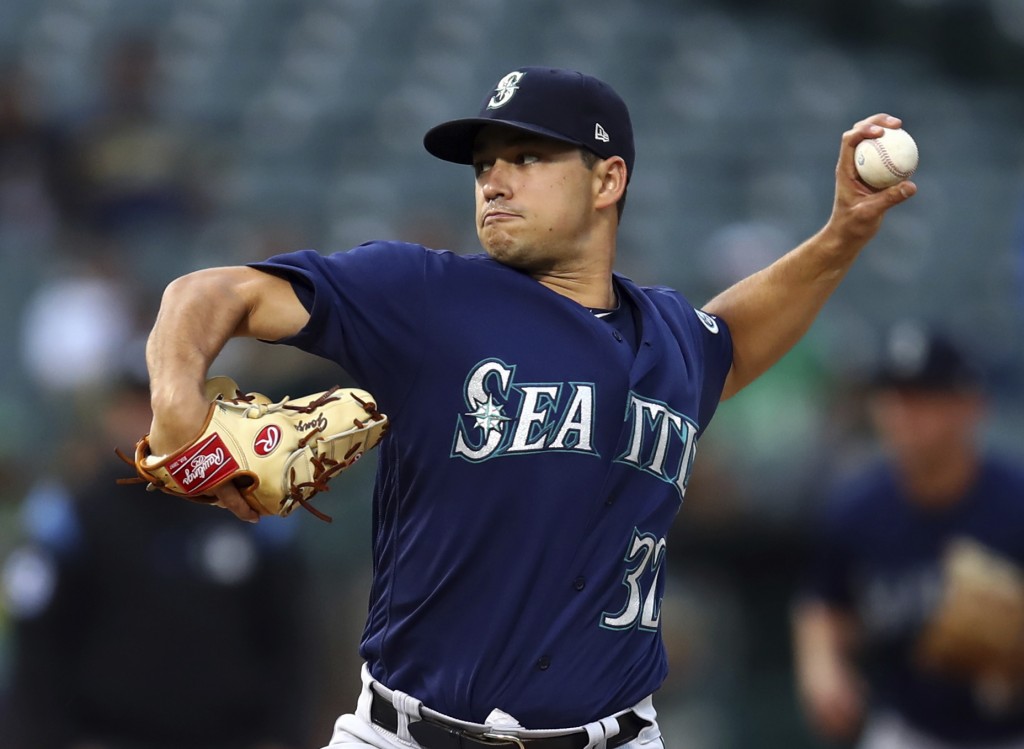 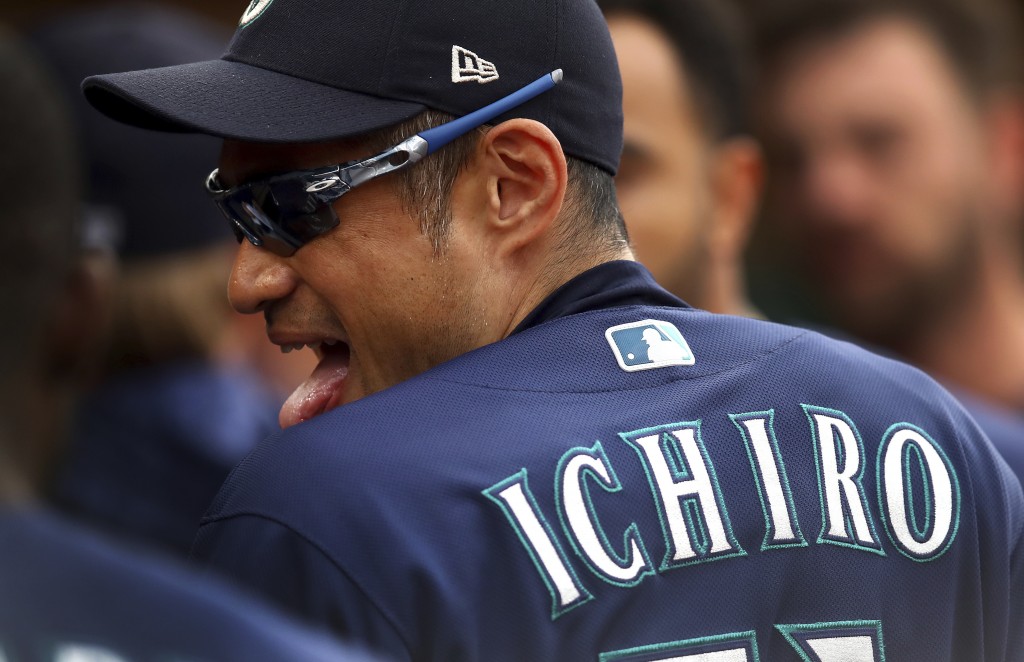 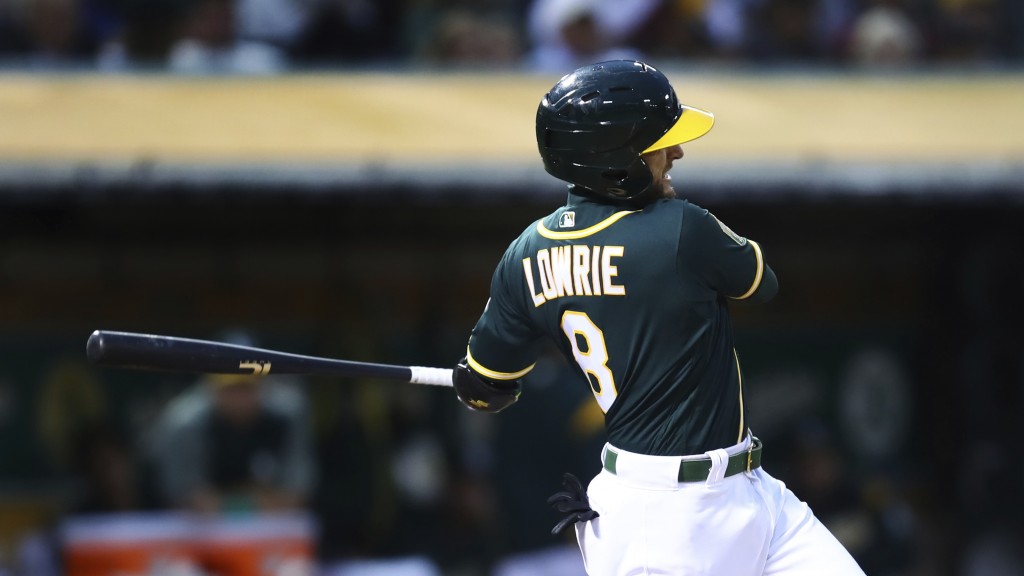 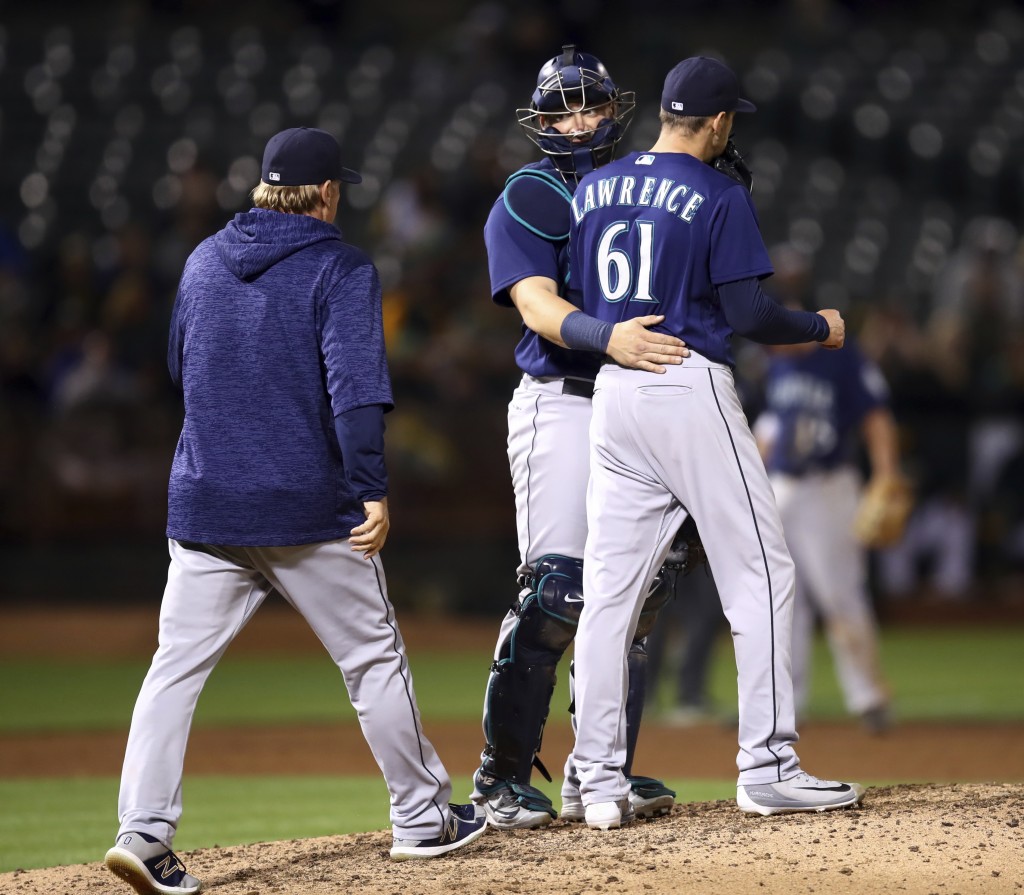 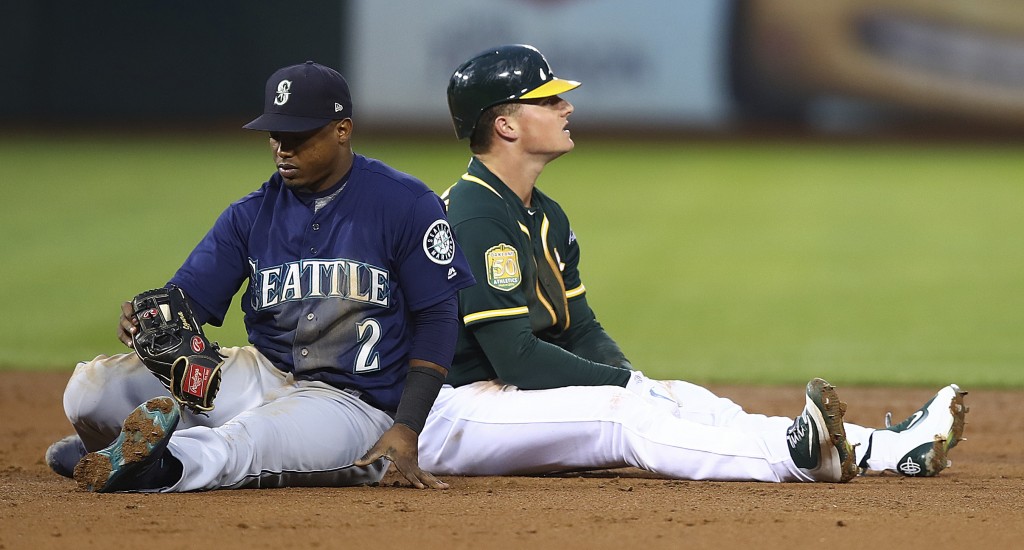 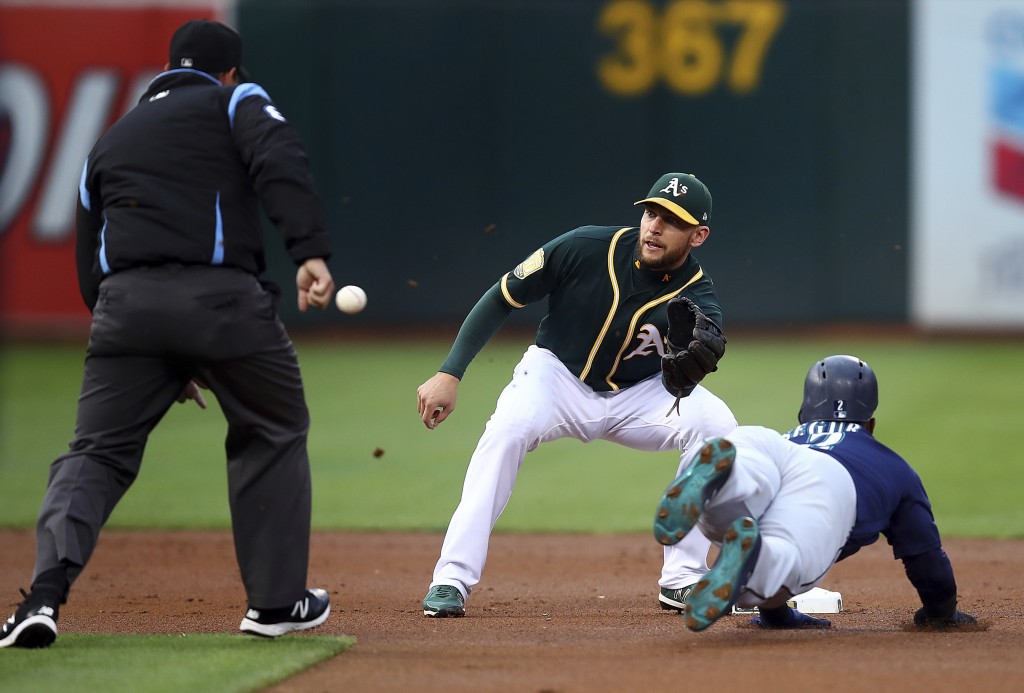 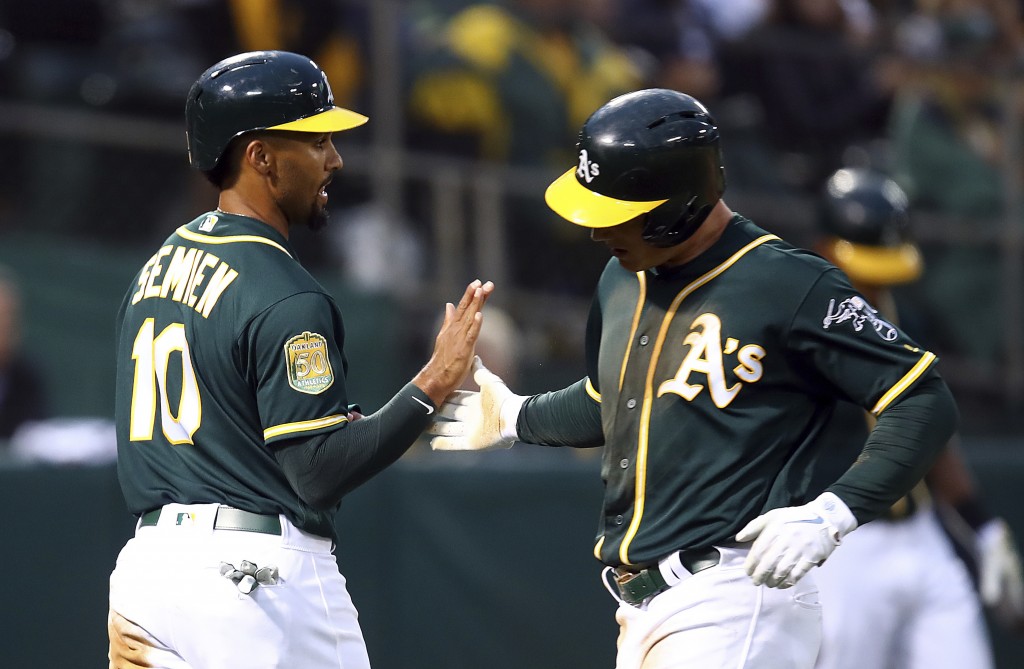 OAKLAND, Calif. (AP) — Jed Lowrie drove in four runs to back Sean Manaea and the Oakland Athletics held off a late Seattle rally to beat the Mariners 7-6 on Monday night in a matchup of AL West contenders.

Manaea (11-8) pitched into the eighth and bounced back from a season-low 2 2/3 innings against the Dodgers his last time out.

Second-place Oakland moved 2 1/2 games ahead of the Mariners, who had momentum coming off a four-game sweep at first-place and defending World Series champion Houston. Seattle had won six of eight. The idle Astros had their lead trimmed to two games over the A's.

Jean Segura and Nelson Cruz hit consecutive RBI singles with two outs in the eighth, and the Mariners — who like the A's have a knack for late-inning rallies — nearly pulled off a comeback. Seattle loaded the bases with none out in the ninth on three walks by Jeurys Familia before Blake Treinen relieved and allowed a run on a wild pitch and Mitch Haniger's two-run single before closing it out for his 31st save. Cruz struck out swinging to end it with runners on first and second.

Matt Chapman hit a two-run double in the sixth, his third double of the game. That matched the Oakland record that he last accomplished on June 12 against Houston.

Manaea gave up two runs and five hits in 7 2/3 innings as the A's won for the fourth time in five games and moved a season-high 23 games above .500 (71-48). The left-hander faced the minimum through three despite allowing a baserunner in each of the initial two innings — getting a caught stealing in the first and double play in the second.

The Mariners challenged Chapman's double in the third while Chapman was checked by athletic trainer Nick Paparesta following a headfirst slide that tore his batting glove. The call stood after review, and Lowrie doubled down the left-field line moments later.

Lowrie hit RBI singles in the first and sixth innings. Only an announced crowd of 10,400 fans were on hand to see his productive night.

The All-Star second baseman was suspended May 15 after he tested positive for Furosemide, a diuretic that can be used to mask performance-enhancing drugs. He tuned up with Class A Everett and Triple-A Tacoma.

Manager Scott Servais plans to use Cano — who is ineligible for the postseason if Seattle makes the playoffs — around the infield. Servais will have a sit-down with Cano once the infielder arrives in Oakland to stress not trying to do too much.

"We need to be smart in breaking him in," Servais said. "He wants to get going, he wants to contribute right away. He's missed playing, he's missed his teammates and being around this whole thing. I know he wants to come in and do a lot. But again small little things."

Mariners: Already lost for the season, RHP reliever Sam Tuivailala will have surgery on his strained right Achilles tendon, and it's unclear whether he will be recovered in time for spring training. He was hurt last Wednesday during a rundown against Texas. He was acquired from St. Louis ahead of the trade deadline. ... RHP Dan Altavilla (UCL sprain in pitching elbow) will throw another live batting practice session soon then likely begin pitching in minor league games within a week. ... RHP Juan Nicasio had a second opinion on his inflamed right knee and is back playing catch.

Athletics: RF Matt Joyce is hitting soft toss and off a tee in the cage and should be hitting on the field sometime this week. ... RHP Jharel Cotton (Tommy John surgery), RHP Andrew Triggs (nerve irritation in pitching arm) and RHP Paul Blackburn (elbow tendinitis) all played catch — the first time for Cotton and Blackburn. Manager Bob Melvin is optimistic Blackburn and Triggs will pitch again this year once rosters expand Sept. 1.

Seattle LHP James Paxton (10-5, 3.63 ERA) looks to win his second straight start when he opposes RHP Mike Fiers (7-6, 3.40), making his second start since the A's acquired him from the Tigers last week.