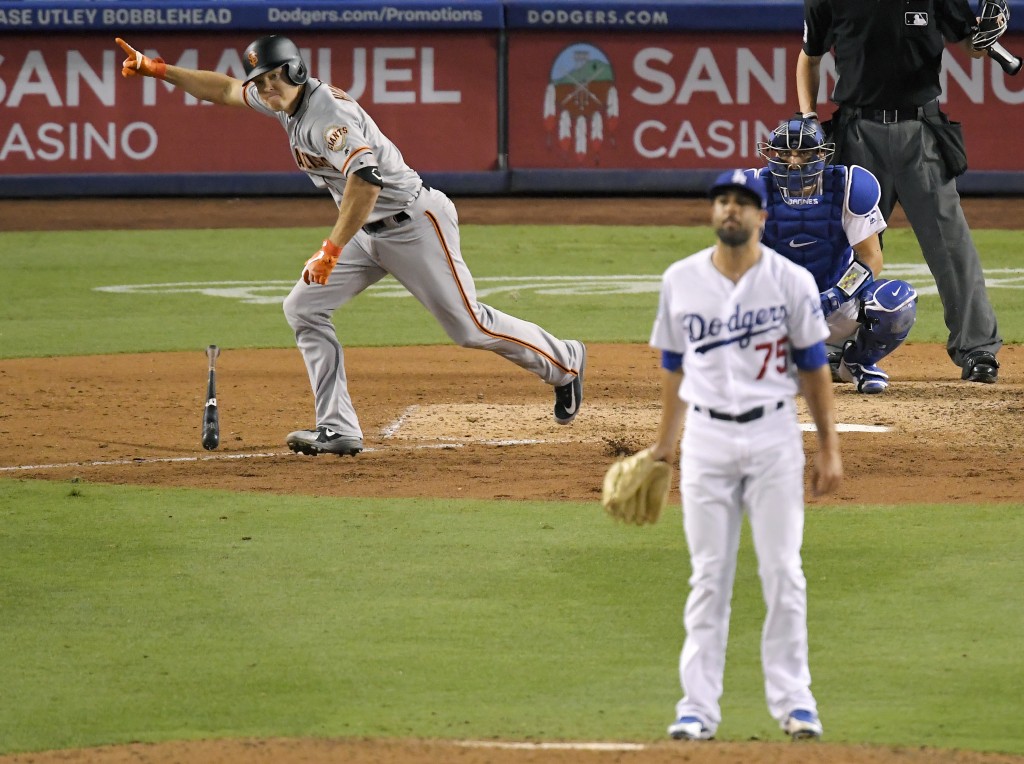 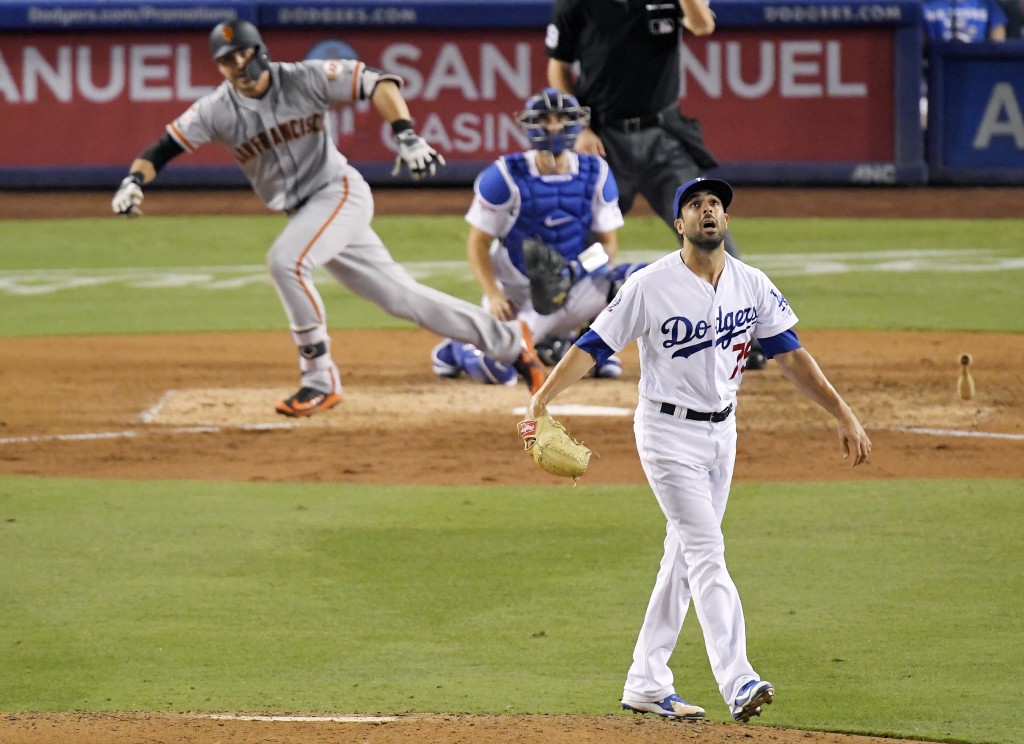 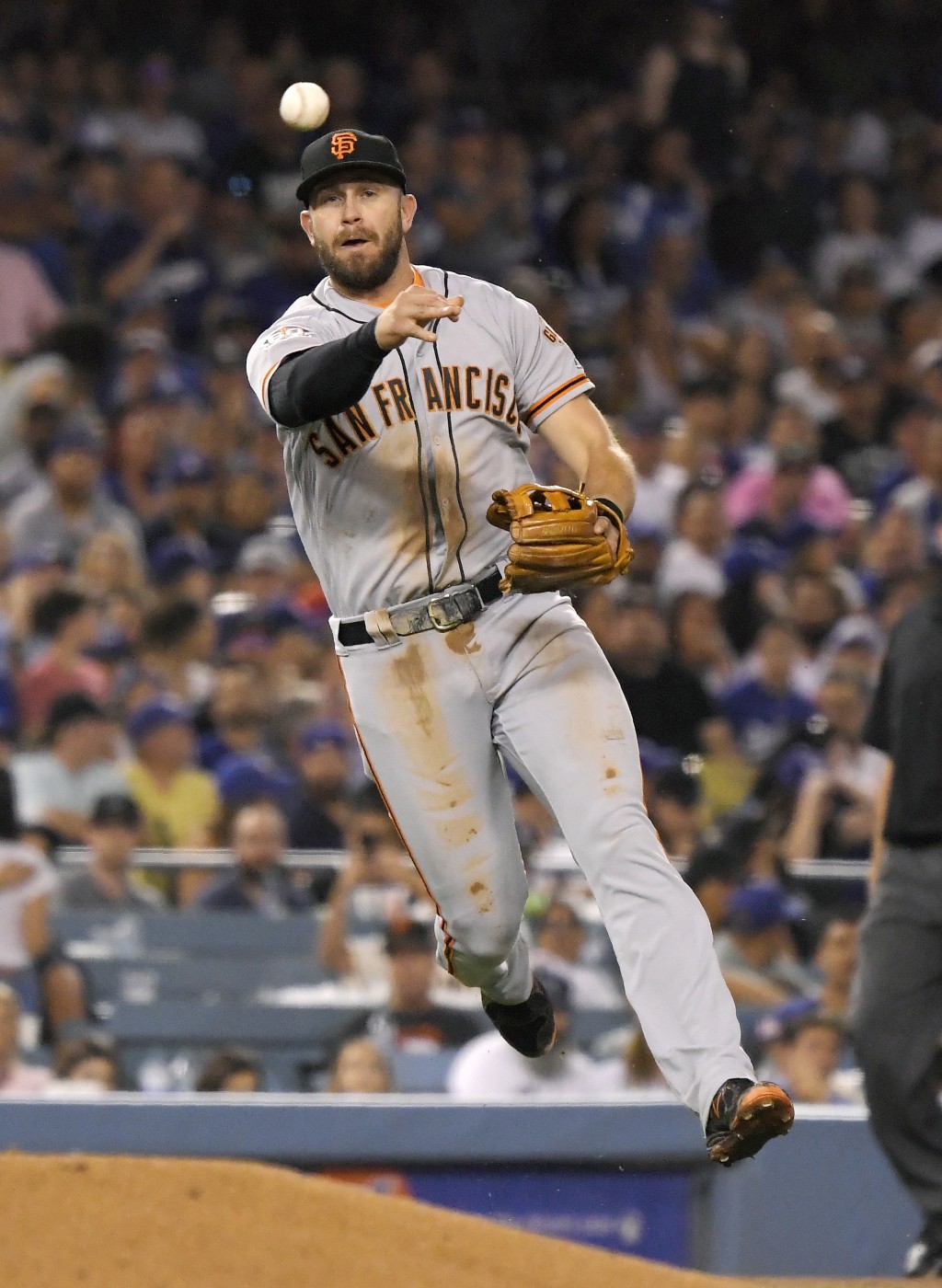 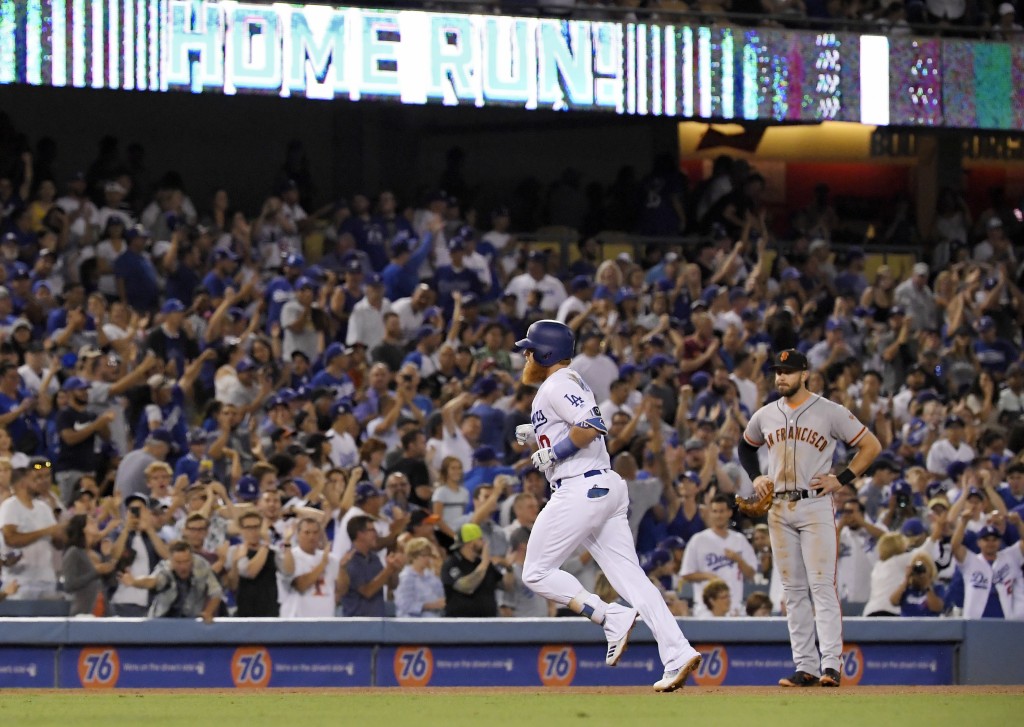 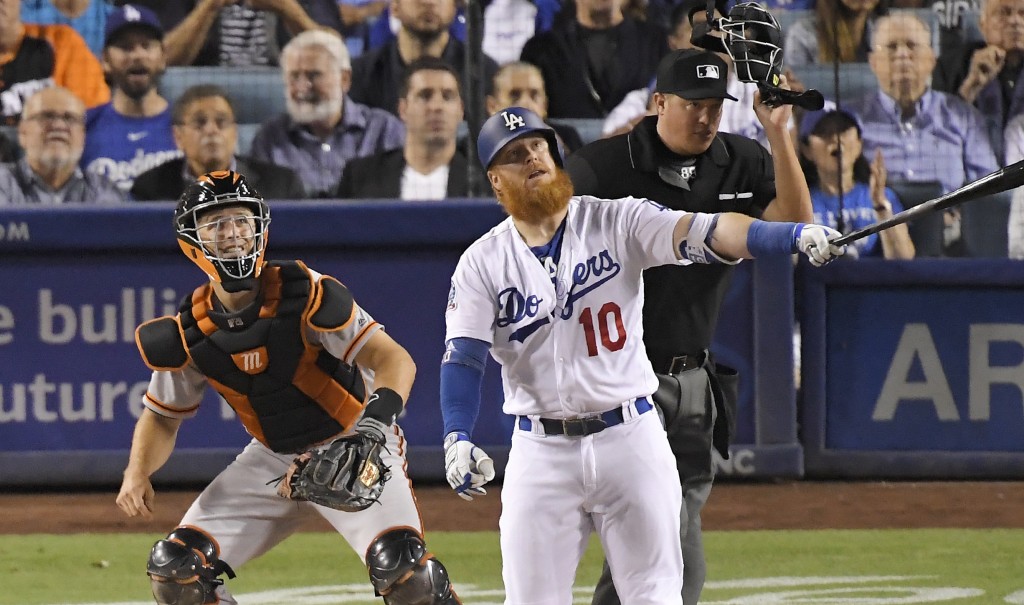 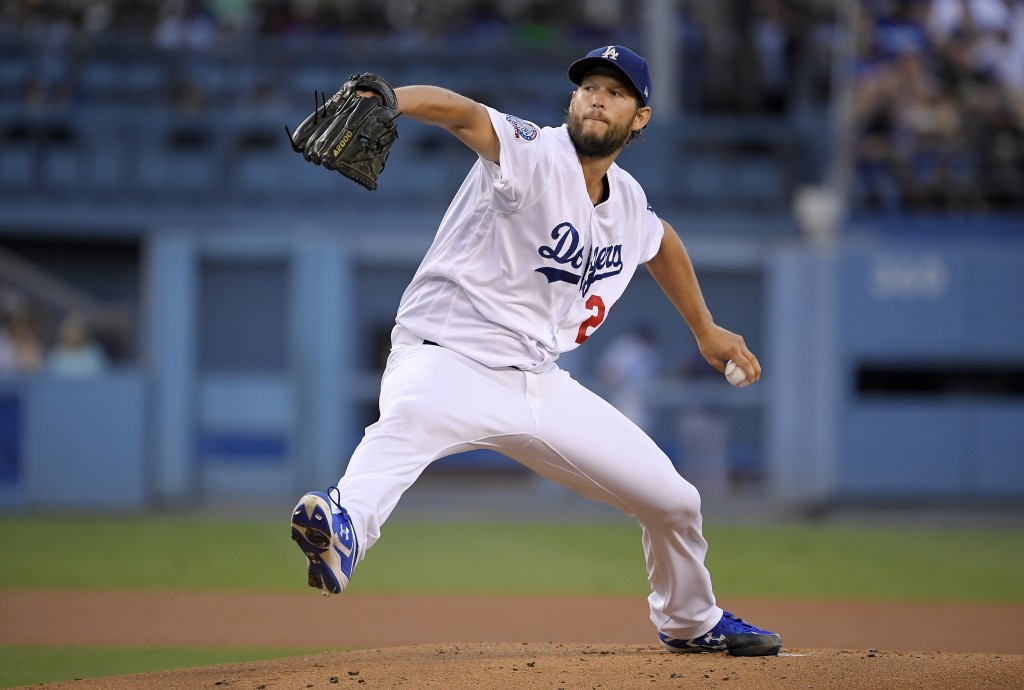 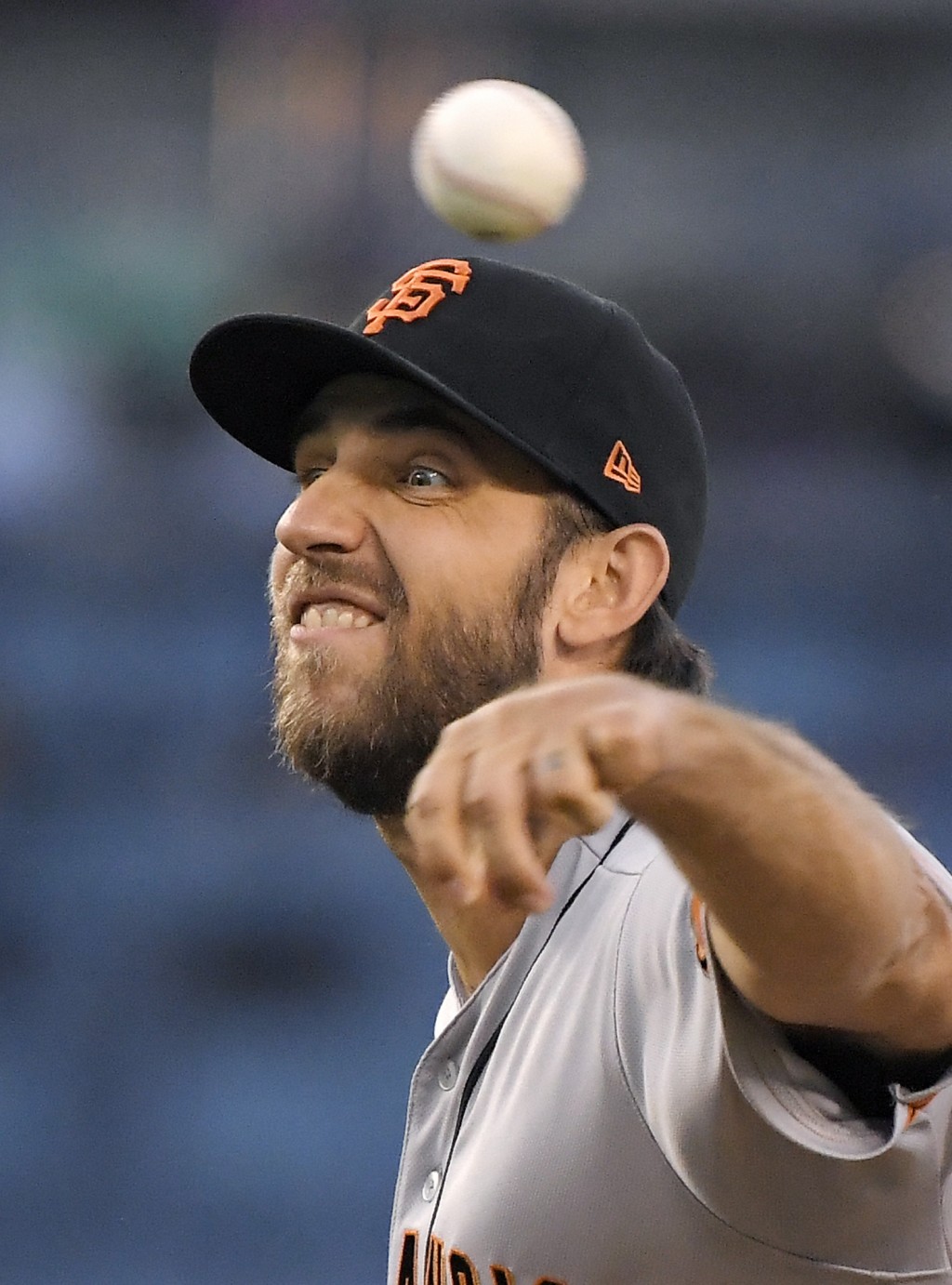 LOS ANGELES (AP) — Pinch-hitter Nick Hundley hit a two-run single in the ninth inning to give the Giants their first lead, and San Francisco rallied for a 5-2 victory on Monday night, handing the Los Angeles Dodgers' bullpen its fourth consecutive loss.

This time, the Dodgers wasted a masterful start by Clayton Kershaw, who held the Giants to one run on eight hits, all singles.

Hundley's two-out single put San Francisco ahead 3-2. Gorkys Hernandez singled in another run, and the Giants scored one more on a fielding error by Max Muncy.

All the runs came against Scott Alexander (2-1), the Dodgers' latest to struggle in the absence of closer Kenley Jansen.

Ray Black (2-1) pitched a scoreless eighth, and Will Smith worked the ninth to earn his ninth save in 11 opportunities.

Kershaw struck out nine and did not walk a batter, lowering his ERA against the Giants to 1.58 in 43 career starts.

Kershaw drove in the game's first run with a bloop double in the fourth. After Austin Barnes singled with two outs, Kershaw looped his hit just fair down the right-field foul line.

Giants shortstop Brandon Crawford and left fielder Hernandez collided on the attempted catch of Kershaw's flyball, both crashing to the ground. Crawford, who appeared to take a knee to the head, recovered to throw Kershaw out as he tried to take third. Crawford batted in the top of the next inning and then exited the game.

The Dodgers took a 2-0 lead against Madison Bumganer in the fifth on Justin Turner's seventh home run of the season. It gave Turner an eight-game hitting streak.

San Francisco got a run in the sixth when Steven Duggar and Bumgarner led off with singles and Duggar scored on a fielder's choice by Andrew McCutchen.

It was the 11th time Kershaw and Bumgarner have faced each other, the most of any two active pitchers.

Giants: 1B Brandon Belt (hyper extended right knee) made a second rehab start Monday, but it was uncertain whether he would rejoin the Giants in Los Angeles on Tuesday. "We will see how it goes and if we think he needs another game or two," Manager Bruce Bochy said. ... RHP Jeff Samardzija (right shoulder inflammation) threw a simulated game Monday. Bochy said he threw about 30 pitches. "He was throwing free and easy," Bochy said. "Threw some good sliders — breaking balls, he threw everything."

Dodgers: Reinstated right-handed reliever Erik Goeddel from the disabled list and optioned switch-handed pitcher Pat Venditte to Triple-A Oklahoma City. Goeddel has been out since Aug. 2 with right lat inflammation. In 30 games with Seattle and Los Angeles, he is 3-0 with a 3.06 ERA.

Giants: LHP Andrew Suarez (4-8, 4.64 ERA) is scheduled to start Tuesday. The rookie will attempt to overcome a recent downturn that has seen him go 1-3 with a 7.43 ERA in his last five starts.

Dodgers: LHP Alex Wood (7-6, 3.58) is scheduled to come off the disabled list and make his first start since leaving his Aug. 3 outing with a sore hip. Wood missed only one start.