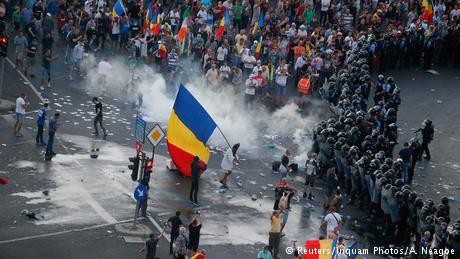 Police used water cannons, tear gas, pepper spray and batons against some sections of an 80,000-strong crowd. More than 450 people were injured in the melee, including 30 police.

"Until now we have received about 30 complaints, and my colleagues are interviewing those who were injured," prosecutor Ionel Corbu said Monday, adding "all those suspected to have acted against the law" will be questioned.

Police insisted they responded in a "proportionate" manner to a group of violent people, supposedly linked to radical supporters of football teams.

The Public Prosecutor's Office has asked police about their actions and has announced that it will analyze videos recorded by officers and demonstrators, as well as the media.

At least five journalists, including one from the Austrian public television station ORF, said they were assaulted in the course of their work, despite displaying accreditation.

Read more: Opinion: What is happening in Romania is not democracy

There will also be an investigation into a complaint lodged by Israeli tourists who were allegedly taken out of a taxi and beaten during the police action in Victory Square. The Israeli Embassy has described the incident as "unacceptable" and "extremely serious."

Romania's center-right president, Klaus Iohannis, a government critic, on Monday again condemned "the brutal intervention of the police" in a televised message.

"To attack innocent people, journalists, women and children, is inconceivable in a European state," he said.

About 10,000 people again took to the streets on Sunday evening to demand the resignation of what they consider a corrupt government. A much smaller police contingent was on hand and there were no reports of violence.

Read more: Why are police clashing with expats in Romania?

EU Justice Commissioner Vera Jourova on Monday called on the Romanian government to reconsider its plans that caused the protests.

"The Romanian government's draft laws as a whole jeopardize the independence of judges and reduce the powers of public prosecutors. They also undermine public confidence in justice," Jourova told German daily Die Welt.

"It would be helpful if the government's plans for judicial reform were revised once again," she added.