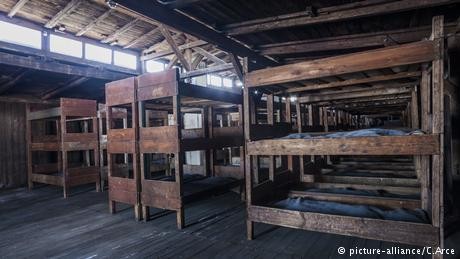 A 17-year-old Israeli is facing a fine after exposing his rear by one the wooden barracks at the site of Majdanek concentration camp in Poland, police said Monday.

The unnamed male was caught exposing himself on CCTV, prompting museum wardens to call the police. The authorities said the youth would be charged with "desecrating a monument or memorial."

"He admitted to the act and said he was willing to accept punishment," police spokesman Andrzej Fijolek told the AFP news agency.

The Israeli national was visiting the Nazi death camp on a school trip. He was allowed to leave the country, but not before paying the 1,000 zloty (230 euros, $270) towards his future fine, Fijolek added.

Museum officials strongly condemned the act they described as "indecent" and revolting."

At least 78,000 people had been killed by the Nazi regime at the site before it liberated by the Red Army in 1944.

In March 2018, a Polish court fined another Israeli teenager for urinating at the site of the Auschwitz death camp, some 300 kilometers (186 miles) southwest of Majdanek.

Last year, a group of young people from Poland, Belarus, and Germany drew media attention with a bizarre stunt that involved them stripping naked and slaughtering a lamb in Auschwitz in what they labeled an appeal for peace. Two men were later sentenced to prison terms of 14 and 18 months for desecrating a memorial site and animal cruelty, while the rest of the group was forced to pay fines or perform community service.