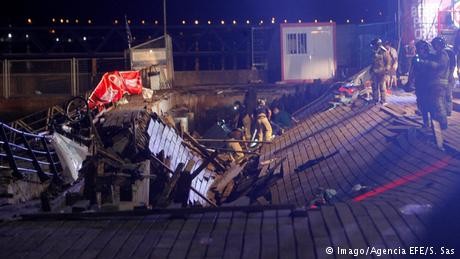 About 316 people were injured, nine seriously, on Sunday evening when a section of wooden boardwalk collapsed during a crowded music festival in the northwestern Spanish city of Vigo.

The seafront platform suddenly gave way under the weight of the many visitors shortly before midnight, causing several to fall into the water, Jesus Vazquez Almuina, the health minister for the region of Galicia, said on Monday.

Rescuers used infrared cameras for three hours to search for any further victims buried under debris, but no one was found. Divers also searched the nearby sea.

The mayor, Abel Caballero, said an area of 30 meters by 10 meters (99 by 33 feet) had given way. He said the reason for the collapse of the 28-year-old platform was not clear.

But the daily Faro de Vigo reported that the Spanish rap artist performing at the time, Rels B, had told the crowd to jump shortly before the accident occurred.

In a Twitter message, Spanish Prime Minister Pedro Sanchez expressed his "solidarity with the injured" and gave his thanks to the emergency services.

The accident occurred during the annual O Marisquino festival of urban culture and sport, which has been taking place since 2001 and each year draws thousands of people to the city, most of them young.