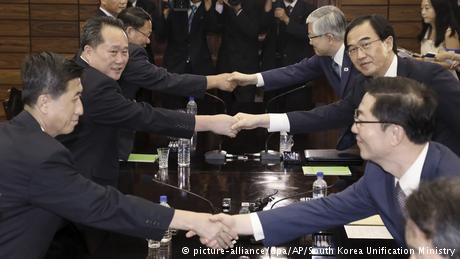 Envoys from North and South Korea announced on Monday they had reached agreement to hold the upcoming peace summit in the North's capital of Pyongyang next month.

Officials from both sides reached an agreement at the truce village of Panmunjom, located in the demilitarized zone (DMZ) that separates the two Koreas.

While no date or an agenda for the upcoming talks were formally announced, the two sides are widely expected to discuss a potential peace declaration and the possibility of launching a series of joint economic and infrastructure projects that could go ahead once sanctions on Pyongyang are lifted.

South Korea is also expected to push its northern neighbor to accelerate the dismantling of its nuclear weapons program. North Korea and the United States have struggled to agree on how to proceed with denuclearizing the peninsula after Kim vowed to disarm during a landmark meeting with US President Donald Trump in Singapore in June.

Following Monday's talks, delegates from both sides said in a statement: "We reviewed the implementation situations of the Panmunjom Declaration (which calls for a formal end to the 1950-53 Korean war and sees the North pledge to denuclearize) and held consultations in a sincere manner on matters related to its more active enforcement."

September's talks will mark the third meeting between Kim and Moon. The two leaders met for the first time in April where they signed the Panmunjom Declaration. The pair met again in May ahead of Kim's Singapore summit with Trump.

The head of the North Korean delegation, Ri Son Gwon, told reporters following the talks that officials agreed on a specific date for the Pyongyang summit, but refused to disclose the date.

A spokesman of South Korea's presidential office said it would be difficult for the summit to take place earlier than September 9, when North Korea celebrates the anniversary of its founding.

Read more: Is North Korea defying the US in expanding weapons production?

The nuclear issue has been one of several ongoing points of contention between the Koreas. Both sides have indicated they want to sign a declaration formally ending the Korea War; however the US has said it would only be privy to such a deal once the North has completely abandoned its nuclear weapons program.

That prompted North Korean state media last month to chide the South, accusing it of failing to take practical steps and only abiding to the views of the US.

Pyongyang has asked the US reciprocate its goodwill gestures, although the Trump administration has so far refused to ease economic sanctions.

Another sticking point is the case of a dozen North Korea restaurant workers who arrived in the South via China in 2016. Pyongyang maintains that the workers were abducted and has even hinted that the issue could obstruct the future reunion of families separated between the two Koreas.

South Korean Unification Minister Cho Myoung-gyon declined to say whether the case of the restaurant workers had come up on Monday, merely stating that Pyongyang's negotiation team had not brought up new issues. "There were mentions that if there are problems to be resolved by both sides, on humanitarian issues or for the development of inter-Korean relations, we should do it," Cho told reporters.