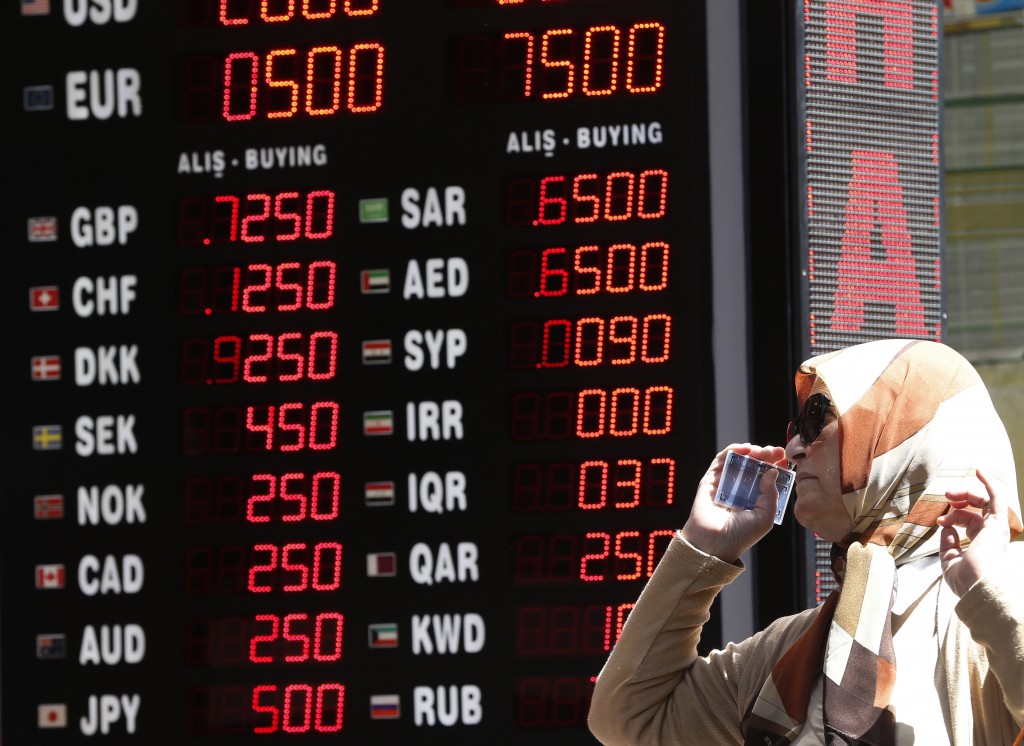 ISTANBUL (AP) — Turkey's currency and stock market kept on falling Monday, weight down by investor fears about the country's economic policies and worsening relations with the United States.

The lira fell as low as 6.89 to the dollar Monday, down about 7 percent on the day and 45 percent since the start of the year. The main stock index fell 3.5 percent.

Here is a look at some of the reasons behind the plunge and how it might affect the rest of the world.

Q: Why is Turkey's currency so weak?

A: The country's economy has grown strongly in recent years, booking 7 percent growth last year. A favorable global environment has given an added push. Central banks in the rich world kept interest rates at or near zero for years, making it attractive for companies in Turkey to borrow in foreign currencies. Investors facing sparse returns on short-term investments in the more developed world, like the U.S., found higher returns if they sent their money to emerging markets such as Turkey. Low oil prices helped, too.

Now, those factors working in reverse. The U.S. Federal Reserve is raising rates, and oil prices are higher.

Q: What about Turkey itself?

A: Its economy has long shown signs of overheating. Inflation hit 15.9 percent annually in June. The country has run a large trade and investment deficit with the result of the world, buying more than it sells and relying on foreign investment and lending. That deficit — called the current account — can weigh on a currency, especially when foreign investment stops flowing in.

As the currency weakens, it can make foreign investors pull their money out of Turkish stocks and bonds as their lira investments lose value. To do that, they have to sell lira — worsening the rout.

Q: Is it just economics?

A: Politics has played a role, too. The lira's fall has been made worse by President Recep Tayyip Erdogan's statements on economic policy. He has urged the central bank to not raise interest rates. Rate increases are the central bank's main tool to support the currency and fight inflation, though they can slow growth. The central bank appears to have heeded Erdogan and has not raised rates when many — including the International Monetary Fund — have urged it to. That drained investor confidence in the central bank, leading to a further sell-off of the currency.

Erdogan's decision to name his son-in-law as finance minister also made people wonder about the direction of the country's economic policy.

Q: What about the dispute with the U.S.?

A: Turkey's decision to jail a Protestant pastor from the U.S. has led to the U.S. imposing sanctions on two Turkish government ministers. Conservative evangelical Protestants are a key constituency for U.S. President Donald Trump.

The mere fact that the U.S. would impose sanctions on Turkey — a stalwart NATO ally for decades during the Cold War — has increased uncertainty about the future in Turkey.

Trump raised the stakes Friday when he said his administration would double its tariffs on Turkish steel and aluminum. That caused a further drop in the lira. The U.S. was Turkey's biggest export market for steel last year, though exports have fallen since.

Q: How is the fall in the lira a problem?

A: It is a problem for Turkish businesses and banks that get revenues in lira and owe money in dollars or euros. The lira has fallen about 40 percent against the dollar this year. That makes a loan in dollars that much more expensive to repay. So the sudden fall raises the possibility of corporate bankruptcies or bank failures that could hurt the economy.

The currency drop will also increase the cost of living for people in Turkey by making imports more expensive. Prices are already up 16 percent since last year and this week's drop will make that worse.

Q: What impact could the turmoil have outside Turkey?

A: There are some concerns about whether European banks would suffer losses on loans in Turkey. The euro currency dropped to a 13-month low on Friday, and bank shares fell.

Outside those five banks, he said, European exposure is "minimal."

Additionally, Europe is nervous because depends on Turkey to restrain the flow of migrants from conflict in the Middle East in return for aid. Some 4 million displaced people, most them from Syria, are currently living in Turkey. Any resumption of serious migrant flows from Turkey would be a big political issue in Europe, where opposition to immigration has fueled the rise of right-wing parties.

Q: What is Turkey proposing to do?

A: In theory, Erdogan could turn to the International Monetary Fund for financial help. He could also impose limits on money transfers to keep capital from fleeing. So far he's shown no sign of doing either.

Having to obey IMF conditions in return for assistance would be a blow to his prestige. Money controls could backfire because Turkey needs foreign investment.

Instead, Erdogan has doubled down. He has mainly blamed foreigners for trying to destabilize the country and equated the financial turmoil to the 2016 coup attempt that sought to depose him. He told supporters to "change the euros, the dollars and the gold that you are keeping beneath your pillows into lira at our banks. This is a domestic and national struggle."

The central bank has taken steps to make short-term credit more easily available to banks, but has not raised interest rates.