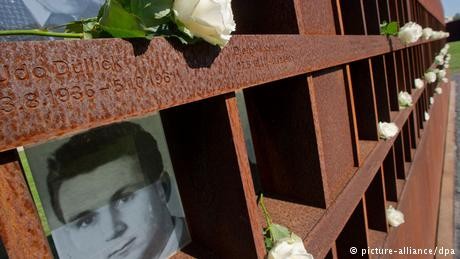 Wreaths and flowers will be laid in the central Berlin Wall Memorial on Monday August 13th. Before that, a service will be held in the Chapel of Reconciliation on the former death strip of Bernauer Strasse. Guided tours through the otherwise closed former East German police prison on Keibelstraße will also be on offer. The construction of the Wall was organised there in 1961.

Just a few weeks before August 13, East German leader Walter Ulbricht had stated: "No one has the intention of building a wall." This audacious lie went down in history. For more than 28 years, the approximately 155-kilometer (96 mile) long rampart cut through Berlin. The division ended only with the fall of the Wall on November 9, 1989.

Bernauer Strasse is considered a symbol of the German division. The world-famous photo of the East German soldier, who jumped over the barbed wire to reach the West shortly after August 13, 1961 was taken here. The same goes for pictures of people jumping out of apartment windows while fleeing the Communist regime.

When the wall was erected, the house fronts on this street were located in the East while the sidewalk was in the West. Today, a large open-air exhibition, including an originally preserved piece of the wall, commemorates the victims of the division.