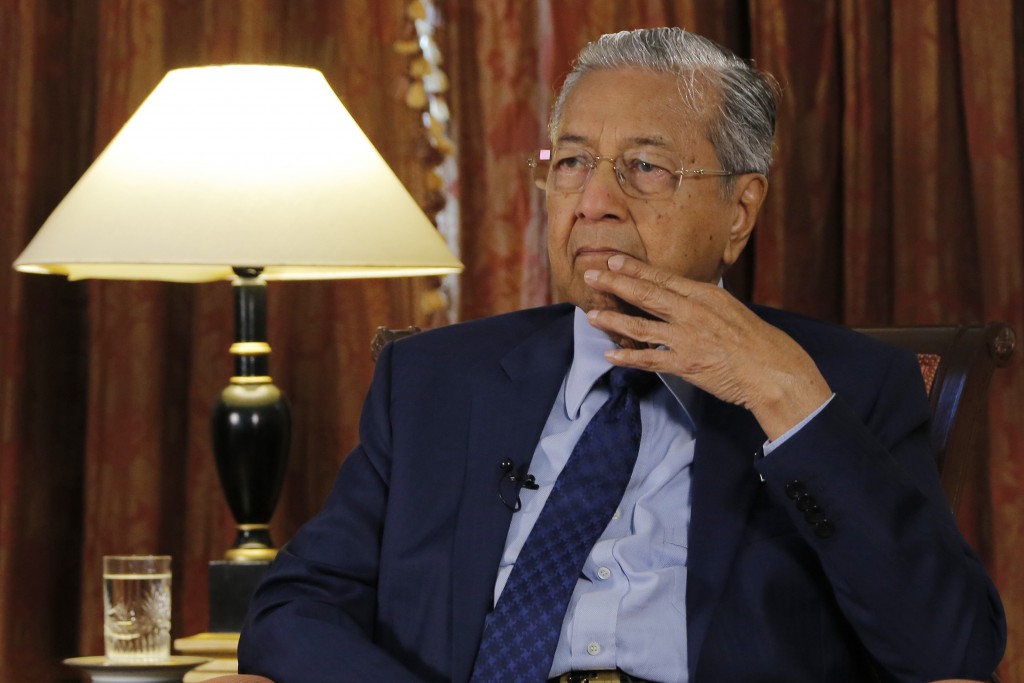 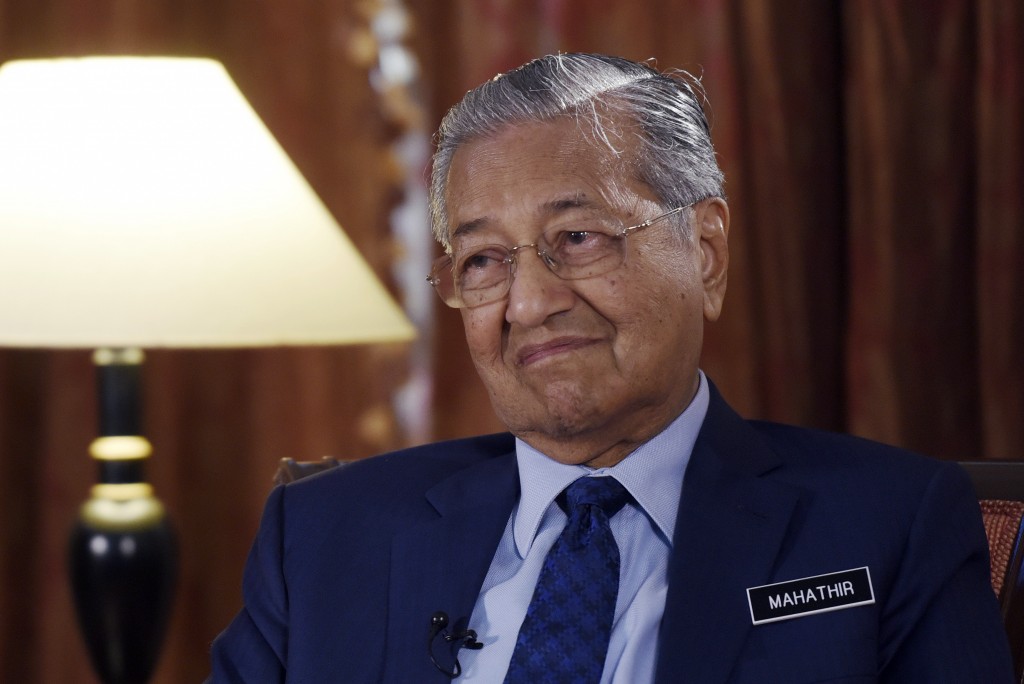 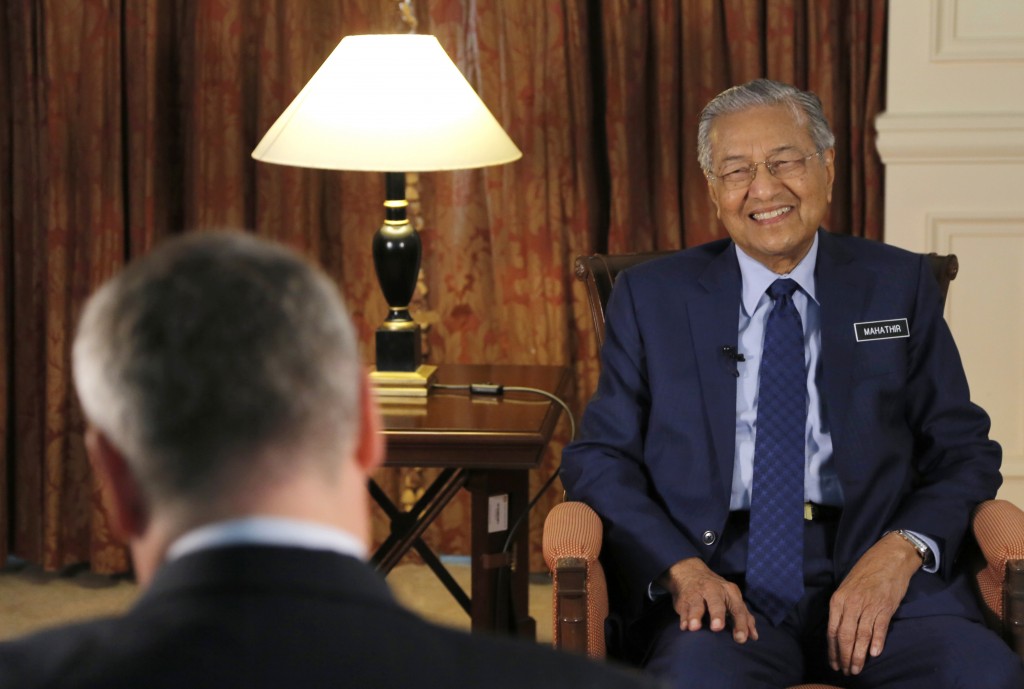 Days before heading to Beijing for his first visit since his stunning electoral victory three months ago, Mahathir said Malaysia doesn't need a Chinese-backed $20 billion East Coast Rail Link and two energy pipelines worth $2.3 billion. The projects have been suspended pending renegotiation.

"We don't think they are viable. So if we can, we would like to just drop the projects," Mahathir said.

If scrapping the projects altogether isn't doable, Malaysia will need to put them on hold until the future, "where perhaps the need will arise," he added. Some of that money has already been paid and could be difficult to recoup.

Mahathir cautioned against further militarizing the disputed South China Sea by reiterating his call for warships not to be permanently stationed there, warning it could cause an unhealthy "arms race."

"We are all for ships, even warships, passing through, but not stationed here," he said. "It is a warning to everyone. Don't create tension unnecessarily."

China claims much of the sea as its own and has built up several man-made islands and equipped them with runways, hangers, radar installations and missile stations to bolster its claim. It has accused the U.S., which routinely deploys warships and aircraft to the sea, of meddling in a purely Asian dispute. Chinese ships also patrol the sea.

STAYING OUT OF SAUDI CONFLICT

Mahathir said Malaysia wants to maintain a neutral stance and not be dragged into the Middle East conflict. His government has shut a Saudi-backed anti-terrorism center launched last year and plans to withdraw Malaysian troops from the kingdom.

"Saudi Arabia is at war. We don't want to be involved in any foreign war... we will not be accused of helping any aggressive wars," he said, citing strikes by a Saudi-led coalition on Yemen and Saudi's conflict with Qatar.

Mahathir blasted Myanmar's treatment of Rohingya Muslims and said he was "very disappointed" with leader Aung San Suu Kyi's failure to halt oppression of the group. He said Myanmar must accept that Rohingya, who have lived in the country for generations, are citizens.

"It is grossly unjust to do what they have done, killing people, mass murder, that's not the way civilized nations behave," he said.

Mahathir said the government will ensure a fair trial for former leader Najib Razak, who faces trial on multiple charges related to the alleged multibillion-dollar looting of the 1MDB state investment fund.

"We promise that there will be no vengeance but the law will take its own course. ... He will get a fair trial in this country," Mahathir said. But he added: "Najib is the main culprit. The world knows that Najib stole money."

Mahathir said fixing Malaysia's finances remains the key priority of the government, which will mark its 100 days in office this week.

"There may be a need for us to sell government assets for us to raise money to pay debts. That is the extent of Najib's wrongdoing," he said. This could include selling stakes in government-linked businesses and properties, with a priority given to Malaysians, he said.

"Today 3 sen can buy nothing. I think every treaty needs to be revised because the cost of living changes," he said. "It won't make a dent in their finances just to give us a little bit of the money they are making from us."

Southern Johor state sells raw water to another state at 30 sen ($0.073) per thousand gallons and that's a "charitable" price, he said. "For a foreign country, we need to get more than that," Mahathir added, but declined to say what price Malaysia is seeking.

Mahathir, who has been accused of anti-Semitic views, said he was not against Jews but was criticizing their wrongdoing.

"There is one race that cannot be criticized. If you are anti-Semitic, it seems almost as if you are a criminal ... anti-Semitic is a term that is invented to prevent people from criticizing the Jews for doing wrong things," Mahathir said.

"When somebody does wrong, I don't care how big they are. They may be powerful countries but if they do something wrong, I exercise my right of free speech. They criticize me, why can't I criticize them?" he said.

Mahathir, the world's oldest elected leader at 93, said he doesn't care how history will judge him.

"Frankly I don't care. I won't be around," he laughed. "When I am dead, it doesn't matter anymore."

Mahathir said there are no roads, schools or buildings named after him in Malaysia except for a rare scholarship in his name.

"I don't allow a personality cult," he said. "If I want to be remembered, I can paint the whole country with my name. I don't care if people remember me or not."